EVERY DOG HAS HIS DAY 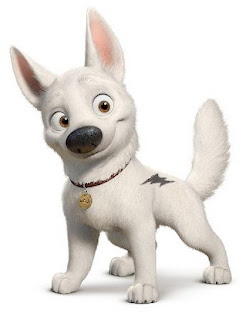 I was recently quoted extensively - though somewhat loosely! - in an article in Scotland's Daily Record, entitled There's Life in the Old Dogs Yet, sketching the Disney studio's tradition of animated canine characters that eventually led to their doggy descendant, Bolt, whose adventures are now out on DVD.

The piece also appeared in the California Chronicle with the lengthy subtitle, Disney's Latest Pooch is Inspired by Magical Cartoon Mutts of Yesteryear.

Perhaps the reason why so many dogs appeared in Disney films (both animated and live-action) is that the great variety of breeds provide plenty of potential for a multiplicity of characterizations. Certainly no film demonstrates that better than the 1955 release, Lady and the Tramp whether among the Spaniels, Scottish Terriers and Bloodhounds at the best end of town...

Or the motley collection of mutts in the City Dog Pound...

However, as I mention in the interview, the Disney dogs we know and love from such films Lady and the Tramp, 101 Dalmatians, The Aristocats and Oliver and Company had some very early - and rather primitive - ancestors.

The first of these was a dachshund who is wound up like an elastic-band in order to power a home-made aircraft in the 1928 short, Plane Crazy, which was the first Mickey Mouse cartoon to be made (and the second to be released). I can't, hand on heart, say that no dogs were harmed in the making of this film, but it is fair to say that the dog doesn't seem to mind too much...

The one story from my interview that I'm surprised the Record's journalist didn't write up concerned the character of Pluto...

The first recognizable appearance of Pluto was in the 1930 film, The Picnic, where he is Minnie's pet dog and sports the name 'Rover'...

It was not until The Moose Hunt (1931) that he first answered to the name Pluto. It is also one of only two pictures in which Pluto ever speaks...

Disney animator, Ben Sharpsteen, is quoted as saying: "We thought the name [Rover] was too common, so we had to look for something else... We changed it to Pluto the Pup, but I don't honestly remember why. I think we were stoned."

Maybe they were! It's a diverting thought! But there was another (and certainly less controversial) explanation for why the name Pluto would have been chosen.

In 1906, Percival Lowell, a wealthy Bostonian who, twelve years earlier, had founded the Lowell Observatory in Flagstaff, Arizona, launched a search for a possible ninth planet in our solar system, which he referred to as 'Planet X'.

It was not until March 13, 1930, that Clyde Tombaugh, a 23-year old astronomer who had been working on the project at the observatory for almost a year made just that discovery and the question was raised as to what name the Lowell Observatory should give to this newly-identified celestial object. 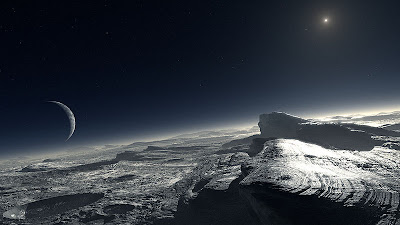 Over 1000 suggestions were received from 'Atlas' to 'Zymal'.

The name 'Pluto' was proposed by an eleven-year-old Oxford schoolgirl, Venetia Burney during a conversation with her grandfather, Falconer Madan, who was a former librarian of Oxford's Bodleian Library. Venetia, who had an interest in both astronomy and classical mythology, picked Pluto - one of the variant names of Hades, the Greek god of the underworld - because it might be appropriate for a planet with what was believed to be an extremely cold, dark environment.

Falconer Madan passed on his granddaughter's suggestion to Professor Herbert Hall Turner at Greenwich Observatory who, in turn, forwarded it to his American colleagues.

Three names were short-listed: 'Minerva', 'Cronus' and 'Pluto' and, on March 24, 1930, the former Planet X officially became Pluto, with its moon being appropriately named Charon - after Hades' ferryman who, in mythology, carried the deceased on their one-way trip across the river Styx to the Underworld.

The discovery and naming of the ninth planet was attended by a vast amount of publicity and the Disney animators on the look out for new name for 'Rover' decided that it would also do - with a little added alliteration - for Mickey Mouse's pal, Pluto the Pup.

In 2006, to the disgust of many, Pluto was reclassified - or more accurately, 'downgraded' - to the category of 'Dwarf Planet'.

Disney's Pluto the Pup, however, remains totally un-eclipsed in his boundless enthusiasm, inquisitiveness and tenacity...

Images: Plutonian surface (with Charon in the sky) from a CRIRES model-based computer-generated impression by ESO -L Calçada; Pluto in Disneyland © Brian Sibley, 2006

I love the serendipity of the internet. Hubby and I were just talking this morning about going up to Lowell Observatory (it's about two hours north of where we live).

And I'm quite familiar with Disney's Pluto through my vocation. The first story I colored for Egmont's Carl Barks Collection was 'Pluto Saves the Ship,' originally published in 1942, and the first published comics work of Carl Barks (as a writer).

In fairness, the journalist might very well have included the story about Pluto only for it to be axed by whoever, in their wisdom, subbed it.
Of course, another famous Disney dog is 'ahow - gosh!' - the rather bashful Goofy. I remember both my daughter and my older nephew having large toy Goofies who went everywhere with them.

SUSAN D-L - Have a great trip to Lowell and, when you get there, give a few defiant "Arf! Arf!" barks for Pluto - and his planet!


SHARON - True! Sub-editors are the bane of every journo's life. An early piece of advice I was given was "Never say anything important in the last paragraph because if the subs is busy they'll always edit from the bottom up!"

As for Goofy, he's a truly curious character who's a sort of hybrid, being half-man/half-dog - a bit like Wolfman without the need for full moons and silver bullets!

His first moniker in the Disney cartoons was 'Dippy Dawg' and then 'Dippy the Goof' before becoming plain old ("Aw, gawsh!") Goofy. In the 1950s, Goofy lost his ears and was turned into a kind of accident-prone, Everyman character named George Geef. Happily, he's more recently gone back to being a man-dog or a dog-man.

The relationships between Disney characters has always been fascinating - for example, how is it that a talking MOUSE who dresses in clothes, lives in a house and drives a car has a pet dog who can't talk and runs around naked?

And, by the way, if Donald Duck is a boy why isn't he Donald Drake and why doesn't he wear trousers??!

It should be noted that the IAU’s controversial demotion of Pluto is very likely not the last word on the subject and in fact represents only one interpretation in an ongoing debate. Only four percent of the IAU voted on this, and most are not planetary scientists. Their decision was immediately opposed in a formal petition by hundreds of professional astronomers led by Dr. Alan Stern, Principal Investigator of NASA’s New Horizons mission to Pluto. Stern and like-minded scientists favor a broader planet definition that includes any non-self-luminous spheroidal body in orbit around a star. The spherical part is important because objects become spherical when they attain a state known as hydrostatic equilibrium, meaning they are large enough for their own gravity to pull them into a round shape. This is a characteristic of planets and not of shapeless asteroids and Kuiper Belt Objects. Pluto meets this criterion and is therefore a planet. For more on scientific arguments supporting Pluto's planet status and worldwide efforts to reinstate it, visit my Pluto Blog at http://laurele.livejournal.com

LAUREL KORNFELD - Thanks for the background information. I had read about various protests at Pluto's planetary reassessment, but it's good to know that the fight goes on.

Wishing you every success!

Dogs make great characters because they’re never exactly the brains of any animal outfit. Halfway through planning an op they’ll get distracted by sticks, chew toys and bottoms to sniff.

That’s a very odd Daily Record website. Under the Entertainment header they list Big brother and Bingo. Er, I don’t think so.

You're right! Cats, of course, can always be the brains behind any cartoon caper!

But will a diamond come if you whistle...?

I think, David, that for many women, myself included, a woman's best friend would probably be a man who treated her well and looked after her(maybe, of course with the odd diamond thrown in for good measure).

Ah,yes, Brian - another great cartoon dog - Spike 'Just Whistle'. That was a classic 'Fred' - the one where Spike becomes Jerry's guardian angel.