IN WHICH WE SAY 'GOODBYE'

When I was a young, struggling writer, I eked out my scanty income by writing obituaries for The Times. These were not tributes to people who had died, but to people who were going to die - at some point in the future.

All newspapers keep obituaries of notable people on file against the day when they are required and I cornered the market in preparing obits on a number of illustrators, cartoonists and animators. What was especially good about the arrangement was that they paid for the pieces up-front, then and there - you didn't have to wait until the person died to collect your fee!

Every now and then one of these early obituaries still surface. For example, when Charles (Peanuts) Schulz died, a few years ago, I was pleased to see, that the Times obituary was mine, even though the paper's policy of anonymity for its obit-writers meant that only I (and the Times obits editor) was aware of the fact.

Nowadays, as an aging, struggling writer, I find that I am, once again, writing obituaries, though, sadly, these tend to be tributes to personal friends. Happily, at least, they usually now appear in the pages of newspapers where authorship is credited. 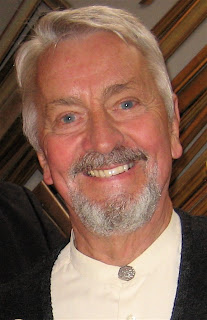 The latest of these appeared in last Saturday's edition of The Independent and was a tribute to the actor Peter Dennis who became a friend thirty years ago when we both attended an event at the London Zoo where a sculpture was unveiled commemorating the sometime presence on the Zoo's famous Mappin terrace of a bear called Winnie who very kindly loaned her name to another bear (of Very Little Brain) called Winnie-the-Pooh - or Pooh for short.

I was there by virtue of the fact that I was something of a Milne/Pooh expert (Joan Bakewell once referred to me on a TV programme as *shudder* a "Poohologist") and Peter was there because he had made a name for himself with a one-man show based on the Pooh stories called Bother!

The unveiling was performed by the incredibly shy Christopher Milne (the original - poor chap! - 'Christopher Robin') and Peter read a chapter from one of Christopher's father's books. At lunch afterwards, Peter and I found ourselves seated on either side of Mr Milne and it was to be the beginning of a long friendship.

As an actor, Peter played in just about everything from Shakespeare to panto as well as many modern dramas. J B Priestly, after seeing him as Stanton in his play Dangerous Corner, wrote to say he had given the finest ever performance in the role, and he became well known for his TV roles such as the family butler, Sutton, in Hadleigh, the popular series, starring Gerald Harper.

However, it was his readings of the Pooh stories that endeared him to audiences at the Edinburgh Festival, at private soirées in the Palace of Westminster and before vast audiences at the Hollywood Bowl.

What is fascinating about Peter's success is that it came about almost accidentally. It was in 1969 that a friend took the then 36-year-old actor to an exhibition of the work of Milne’s illustrator, E H Shepard, at the Victoria and Albert Museum in London and, somewhat belatedly in life, he was introduced to Christopher Robin and his fiends in the 100 Aker Wood.

Click image to enlarge
Having lived what he described as a “joyless childhood” without the companionship of books, Peter had never encountered the Milne classics but, when he did, it was love at first reading and the seed was sown for what would become a career bringing the stories and verses alive for others.

As I note in my obituary...

Many actors have recorded Milne’s stories [among them Alan Bennett, Willie Rushton, Lionel Jeffries, James Stewart, Robert Shaw and Carol Channing] but none have captured the author’s sharply defined characters and sly, ironic wit as successfully as Dennis. His vocal characterisations were a delight: the ponderous thought processes of Pooh; the jumpily anxious conversation of Piglet (peppered with grunts and snorts); the lugubrious melancholy of Eeyore; the clipped, efficient, tones of Rabbit and the pompous grandiloquence of Owl. Equally successful was his matter-of-fact delivery, devoid of both the cloying sentiment often associated with the books and the strident brashness that came with their Disneyfication.

Peter made an acclaimed series of broadcasts and then recordings of all the Pooh stories and Christopher Robin verses and, during the last months of his life - while heroically fighting cancer - he recorded readings of Christopher Milne's remarkable autobiographical volumes, The Enchanted Places and The Path Through the Trees.

You can read the full obituary here.

And you can find out more about Peter (and listen to extracts from his recordings) here and (at the bottom of the page) here.

... in that enchanted place on the top of the Forest, a little boy and his Bear will always be playing...