I've spent the last few days in the company of an amazing woman: 90-year-old Marge Champion. 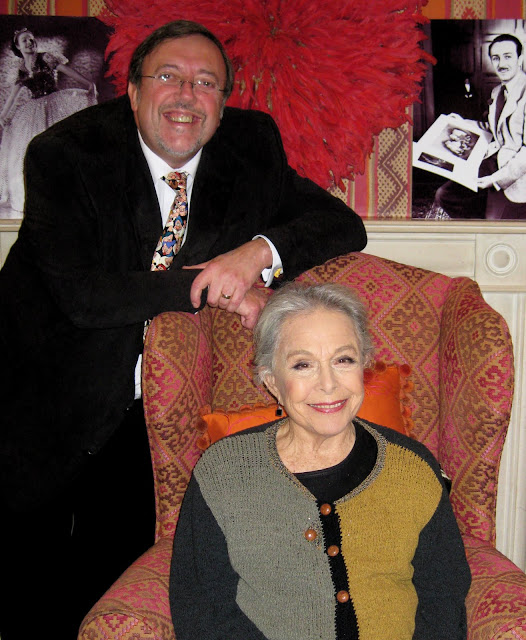 Marge was one-half of the highly successful dance duo, Marge and Gower Champion, whose films include the 1951 version of the Kern/Hammerstein musical, Show Boat and a string of other films - Lovely to Look At, Everything I Have is Yours and Give a Girl a Break - as well as stage appearances and a TV series before Gower went on to direct and choreograph such famous musicals as Bye Bye Birdie, I Do, I Do! and Hello, Dolly!

Here are Marge and Gower in a wonderful routine (choreographed by the great Jack Cole) from the 1955 film, Three for the Show...

Curiously, Marge's status as a Hollywood legend was not her reason for being in town or for our spending so much time together. She was here to help promote the latest release on Blu-ray DVD of Disney's Snow White and the Seven Dwarfs for which, 76 years ago, she acted as live-action reference model for the film's heroine: a performance that was captured on 16 mm film and then used by the animators to create Snow White's animated likeness in the picture.

Marge and I (as one of the Disney Historians featured on the DVD bonuses) were giving press interviews during which she explained her unsung work on this groundbreaking and iconic film.

The fourteen-year-old Marjorie Belcher - as she was back in 1934 - was paid just $10 a day to act out, in pantomime, all Snow White's scenes wearing the famous costume on a virtually deserted sound stage with the minimum of props such as dwarf-sized tables, chairs and beds.

A line with hanging ropes was set up and Marge ran to and fro, brushing them aside as Snow White does when running through the scary forest from the Queen's Huntsman; she acted out the scenes at the Wishing Well, kneeling by her bed to pray for the dwarfs and for the scene in which she danced with Dopey precariously balanced on Sneezy's shoulders.

Here's a still from the footage, with Disney Musical Director, Oliver Wallace, standing in for Sneezy and Dopey... 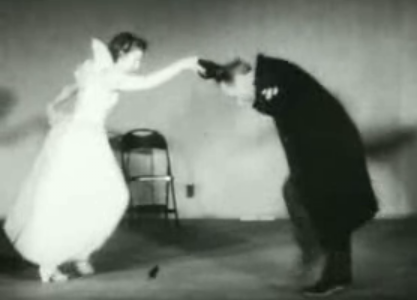 Marge, along with Snow White's voice, the late Adriana Caselotti, provided - without credit - the personality of this memorable character in a film that was not just a milestone in the art of animation but also in the history of the movies.

Incidentally, the animators (to one of whom, Art Babbitt, Marge was briefly married) had a composite name by which they referred to Snow White's vocal and physical references - Margiana Belchalotti! Someone said it sounded like an Italian ice-cream sundae; I said it sounded more like the after-effects of one!

Here's the lady herself on CBS breakfast show - it's a bit early morning American-ish, but you do get to see the lady as she was and as she is...


Marge, who as you can see from that clip, still dances every day has a wonderfully indefatigable, life-affirming view of life.

When I asked her the secret of her long and active life she replied: "Celebrate each new decade of life for what it gives you rather than regretting what it takes away..." 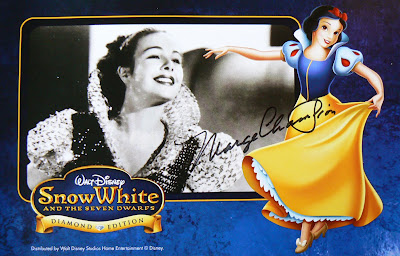 By the way, in that photo at the top of this post Marge is wearing (though you can't see it because of the jacket) a top with Mae West's famous line picked out in glitzy sequined letters: "I used to be Snow White but I drifted"!

Wow -- to look at that photo of the two of you, one would never guess that she is 90! Wonderfully interesting post (as always), Brian. Fascinating information about her Snow White experience, and of course, the dance routine was sheer magic. (And how I love those songs -- I know what I'll be singing today!)

She looks terrific - at least 20 years younger ( and you don't scrub up so badly yourself, Brian).

90-somethings today are pretty terrific! I "look after" a nearly 96 year old lady and she sometimes doesn't seem a day over 70! Marge is right - you should keep on using whatever muscles are stilling working!
And why should 60 not be the new 40? I know 50 for me was the new 30!
galinon: a group of unknown persons who serve as background material for cartoon films

Just a shame no one told either your or my body that!

Which one is the 90 year old ? (Sorry, Brian!).
I fondly remember the Champions' routine in the film of Showboat and the credit "choreography Gower Champion" in many other musicals.

Roger O B...
GYMTI: what you wear over your leopard while exercising
BILITYP:gratuity to Mr Connolly

And another lady who sure does not look her age, Dame Andrews, who added another year on the first of this month!

I guess Walt's magic has something to do with all of that! ;-)

Maybe Marge's association with Disney meant that she was simply drawn towards youth, while I suspect the evergreen Ms Andrews took a few lessons from the ageless Mary Poppins.