A SPOUSE FOR A MOUSE

One of the items from my Disney collection currently on display at The Cartoon Museum's exhibition Animal Crackers, is a piece of sheet music for a ‘Novelty Fox-trot’ with words by Edward Pola and Music by Franz Vienna, published in London by Keith Prowse in 1933 and entitled... 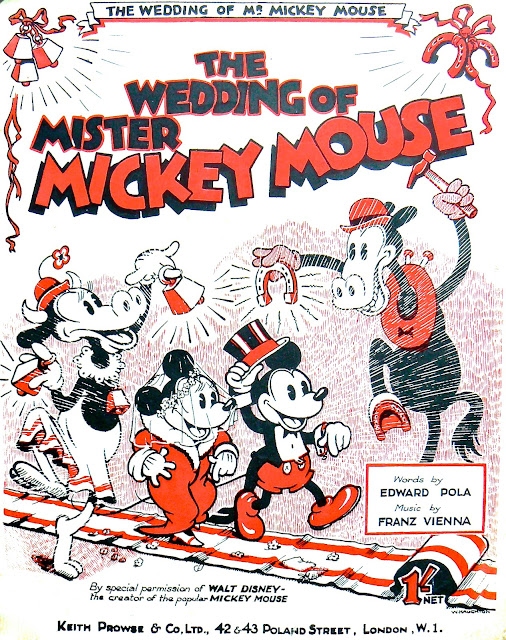 This is a classic example of early British Disney merchandising which was not subject to the same rigours as were applied to the American products from the studio (and which are now universal); hence the surprising revelation that Mickey and Minnie Mouse had tied the knot – a story seriously at variance with official Disney lore which has always maintained that they are 'just good friends'!

The cover artwork is by Wilfred Haughton, a prolific British artist working for Disney in London who was responsible for much of the artwork in early Disney comics and annuals published in the UK.


It’s gala day, the day of the year,
The sun will shine, the sky’ll be clear,
The bells will ring, the people will cheer,
For the wedding of Mister Mickey Mouse.

There’ll be ducks and drakes, a waddl’ing goose,
A chimpanzee, the Zoo turn’d loose,
And ‘Peg-Leg’ Pete’s declaring a truce,
For the wedding of Mister Mickey Mouse.
The big brown bear will dance for all the company,
The whole affair will be broadcast by the BBC;
There’ll be fancy hats and fancier clothes,
A kangaroo with pretty pink bows,
And elephants with manicured toes,
At the wedding of Mister Mickey Mouse.

The band will play a one-step and a gavotte,
And then the fox will dance a real fox-trot;
Clarabelle the cow will jump right over the moon,
Then you’ll hear Pluto croon the latest tune.
Preacher man will see the knot is properly tied,
He’ll shake hands with the groom, and kiss the bride;
Then off they’ll go to find their gingerbread house,
Where they’ll be happy as Mister and Missus Mickey Mouse. 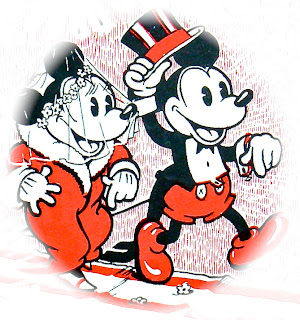 And here's what it sounded like as performed in 1933 by Harry Leader's band (not, as it says on the record label, Jay Wilbur)...

Interesting the stuff that got released back then.

... and of course they had a son and daughter, as announced by The Bonzo Dog Doodah Band on the "Gorilla" album "Mickey's Son and Daughter".

Oh the world is so delighted
and the kids are so excited
For the stork has brought-a son and daughter
For Mr and Mrs Mickey Mouse...

Christopher – True. And it is a testament to MM's huge popularity that just 5 years after his debut he was the subject of so many homages.

Bob – Indeed, yes! And long before TBDDB recording. I have the sheet music for that number, too, (the offspring being delivered by stork) but – like so much else in my life – it is currently in store! One day I will post it here...

I really like the early Disney items from Europe, before they clamped down on the artistic variances.

So if the official Disney stand is that Mickey and Minnie are just good friends, I wonder when the divorce occurred? Probably in early 1938 when the world's eyes were diverted by all the Snow White hoopla. ;)

Thanks to JIM KORKIS (via GREG EHRBAR) for this quote from an article entitled, 'Mickey Mouse is 5 Years Old' by Walt Disney in Film Pictorial September 30, 1933:

"In private life, Mickey is married to Minnie. A lot of people have written to him asking this question, because sometimes he appears to be married to her in his films and other times still courting her. What it really amounts to is that Minnie is, for screen purposes, his leading leading.

"If the story calls for a romantic courtship, then Minnie is the girl; but when the story requires a married couple, then they appear as man and wife. In the studio, we have decided that they are married really."

On Facebook, I compared Mickey and Minnie with Jack Benny and Mary Livingstone – in real life husband and wife, but in the shows, single sweethearts. Interestingly, Jim Korkis recalls having seen a Disney studio reference drawing the very same comparison and a similar one with George Burns and Gracie Allen.