There probably isn't a fruit in the world with a more complex symbolic character than the POMEGRANATE.

The pomegranate was brought to the Agean, from Iran in the earliest days of sea travel and exploration.

Today it is found all over Greece - on trees and market stalls and in symbolic representations signifying fertility and good fortune. 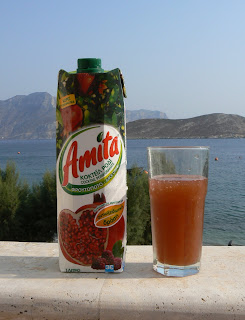 The pomegranate - now the source of a popular packaged fruit juice - also features in the Greek myth of Persephone. There are various, slightly differing versions, of the story but here's the basics: Persephone was kidnapped by Hades and carried off to live in the underworld as his wife.

Persephone's mother, Demeter, went into mourning for her lost daughter and being the goddess of the Harvest, everything stopped growing. Anxious to prevent the world from dying, Zeus, the supreme god, ordered Hades to return Persephone.

There was one problem: the Fates had ruled that anyone who took any food or drink in the Underworld was doomed to remain there for eternity. Hades cunningly tricked Persephone into eating four pomegranate seeds - in some versions, six or seven seeds - as a result of which she was condemned to spend four months in Hades company every year.

During Persephone's annual vacation in the Underworld - surely the holiday from Hell! - Demeter mourns and the earth ceases to be fertile. Thus the seasons of the year were satisfactorily explained for the benefit of Greek agriculturalists.

The Qur'an instructs that pomegranates are grown in the gardens of paradise; while, in Jewish tradition, the pomegranate symbolizes righteousness since it is alleged to contain 613 seeds, corresponding to the 613 mitzvot (or commandments) of the Torah. Like Persephone's seeds, the actual number found in any one fruit varies considerably - as can be testified by anyone who has brought a pot of them from Marks & Spencer's over-priced, luxury, power-food counter! Not to be outdone, the early Christians latched onto the pomegranate as a symbol of the fullness of Christ's suffering and resurrection - which inspired many classical painters such as Sandro Botticelli (right) to show the Virgin Mary and/or the Infant Jesus holding a fruit that is bursting open.

Today, in Greece, the Orthodox Church keeps the pomegranate's symbolism alive and shops sell pomegranate knick-knacks such as key-chain fobs. The fruit is also featured in the menus served on the religious feast days as well as at funerals and at weddings where a pomegranate is often broken on the ground.

When visiting a new home it is customary to take, as a first gift, a pomegranate that will be hung up on the wall to express a hope for an abundance of happiness and prosperity. Goodness! I do hope you appreciate the fact that - even when I'm on holiday - I'm passing on valuable knowledge to my loyal blog-readers!

Thanks for the pomegranate back story.

As kids in Cyprus we used to regularly be given pomegranates, and used to love pulling the seed-centred bits out with a pin. Eating a pomegranate was almost a play activity in itself.

Nowadays, though, it all seems too much work for so little reward, although I saw a carton of pomegranate juice on sale the other day and was sorely tempted.

My life runs completely opposite to the Hades story.Because I have never tasted a pomegranate, I am doomed to spend two weeks of each year in Skegness. At least I think that's the reason.I'd hate to believe I was going there of choice...

But, pomegranates in summer?, in Spain is a fruit of autum... I send you a photogaph of the pomegrante's flower, is one of my favourites in my orchard. Oh, but is disgusting when you peeling a pomegranate...

I hope you're both having a great time. I really appreciate the fact that you keep posting and... advertising my country while on holiday! I'm starting work again tomorrow but I'm glad you're still enjoying your vacation!

EUDORA Thanks for the beautiful pomegranate flower - sorry I can post it to the blog from here. The fruit is on the trees on the Greek islands end of August/beginning of September. I wonder if this one of the last seasonal fruits...?

I still yearn for the days when strawberries in Britain meant summer - as opposed to an indication that fruit was being shipped in during winter months from somebody else's summer!

RENA FAN - Thank you! I love your country and its culture...

Well, we have pomegranates in our trees know, but we can't eat them until november perhaps, is a fruit for the days of autum and winter. But oranges and grapefruits willl come later, for december and january, as well as chesnuts and sweet potatoes... But as you point out, know we have fruits of winter in summmer, and fruits of summer in winter..., but is stilll better if you eat them in the original season...;)