The other day I was writing about images of creepy kids, today I want to rejoice in the work of one of the most engaging child artists of the twentieth century...

His full name was Norman Thelwell, although he kept that moniker for signing his landscape paintings and only used his stylised surname signature on his cartoons. And it was those cartoons that brought him fame and fortune - particularly the hundreds that featured youngsters ernestly engaged in equestrian pursuits.

Thelwell gave us a legion of plump little girls (and one or two boys) in jodhpurs, hacking jackets and riding hats sitting astride equally plump little ponies with shaggy manes and a lot of attitude and they made him a much-loved national institution.

Essentially, Thelwell’s ponies are short, fat haystacks that are often so hairy that it’s not always easy to tell which way they’re facing! And whilst their riders invariably have sweetly cherubic features, they conceal an iron will that would be the envy of the most determined bronco buster to ever ride the range. 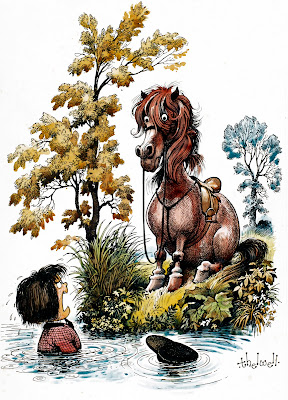 TALK TO YOUR PONY - HE WILL KNOW WHAT YOU MEAN
Click on image to enlarge
But as an exhibition, The Definitive Thelwell, which opened yesterday at Chris Beetles gallery in London demonstrates, Thelwel's artistry was far broader than the popularity of those broad-beamed lasses and their mounts might suggest.

In fact, his cartoons - always impeccably drawn and invariably placing cartoonish characters in highly-naturalistic settings (Thelwell was an accomplished painter of seas and landscapes) - embraced pretty much all the fancies and foibles of the British people: their passion for the Great Outdoors... 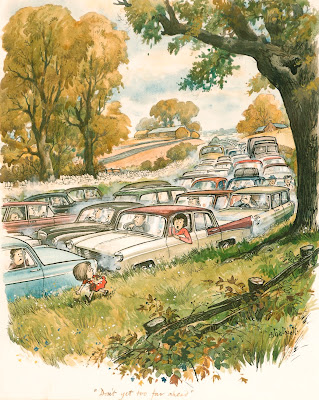 DON'T GET TOO FAR AHEAD
Click on image to enlarge

Their stoically acceptance of the rigidity of the class system... 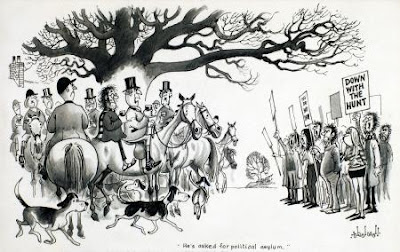 And their undying enthusiasm for sport... 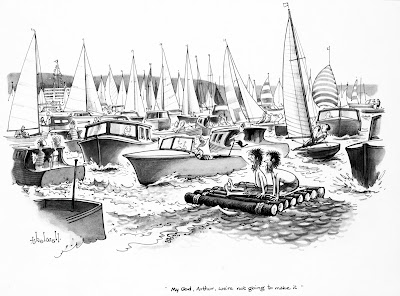 MY GOD, ARTHUR, WE'RE NEVER GOING TO MAKE IT
Click on image to enlarge

All of these topics were represented through several decades of Thelwell cartoons in publications ranging from '50s pocket mags like Men Only and Lilliput via The Sunday Express and the Eagle comic to the pages of that most hallowed of humorous publications the late, lamented Punch for whom he drew over 1500 cartoons and some 60 cover illustrations.

At a time when the popular style adopted by cartoonists was for the swift and sketchy, Thelwell consistently created impeccably crafted works of art. Even without the invariably witty captions, his pictures were miniature masterpieces. 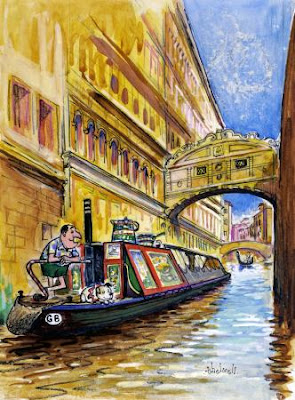 Many of Thelwell's cartoons lived on, beyond the ephemeral life of newspaper and magazine, as a series of books that became obligatory reading matter in the nation’s smallest rooms and included such titles as Thelwell Country, This Desirable Plot, Thelwell's Brat Race, Three Sheets in the Wind and The Complete Tangler, the cover art for which is on show (and for sale) in the exhibition. 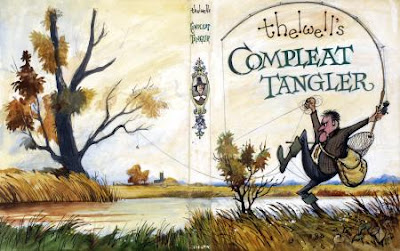 There were also books of cartoons about cats and dogs and, obviously ponies who, along with their owners, were celebrated in Angels on Horseback – and elsewhere, Thelwell's Riding Academy and A Leg at Each Corner... 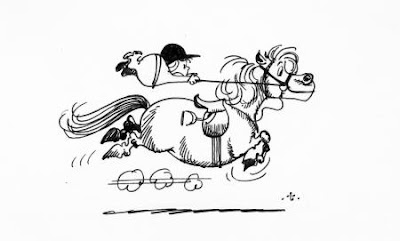 As I comment in an article I've just written about the exhibition for The Lady:

Look at any one of the pony pictures and you see Thelwell’s genius at observing and capturing personality as well his skill at depicting movement... 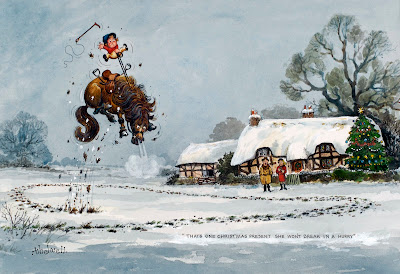 THAT'S ONE CHRISTMAS PRESENT SHE WON'T BREAK IN A HURRY
Click image to enlarge
...a pony leaping off the ground, snorting with temperament, hooves kicking up clods of earth while the rider, tossed into the air, resolutely clings onto the reins for grim death. One simply has to smile.

The sense of movement and dynamism in his pictures is key and in dozens of drawings - whether of animals or people - they are captured in mid-action and, often, mid-air! 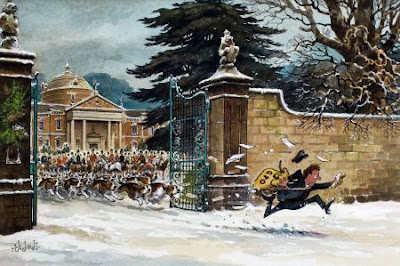 When comes to Thelwell's equestrian pictures what is rather surprising is that he only ever once sat astride a horse and wan’t too keen on creatures that he referred to as "great windy things that'll grab your coat off your back as soon as look at you."

Thelwell died in 2004 at the age of 80 after a long and debilitating struggle with Alzheimer's Disease that left him unable to recognise the famous signature appended to so many wonderful cartoons.

There is no doubting the enduring appeal of the pony cartoons that brought him fame and which many will see as his lasting legacy, but as this new exhibition - and the excellent accompanying catalogue - demonstrates, he was an artist of consistent brilliance both as a draughtsman and as comic genius. 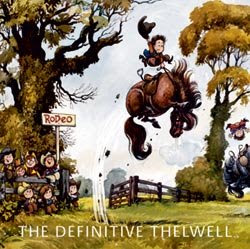 You can read my article about Thelwell in The Lady, here.

And you can discover more about the life and work of this much-loved artist on his official website. 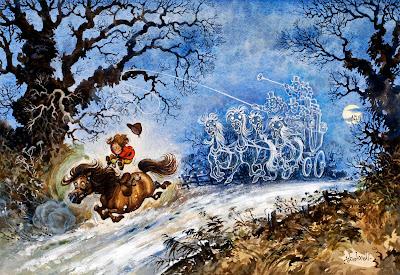 All images: © the Estate of Norman Thelwell

Oh, thanks for flagging the exhibition up. The mention of Thelwell brought back many memories. The names of the books, especially A Leg in Each Corner came to mind as soon as I saw the name.

On the first farm – which was when I would have been about nine – there was a stable next door and every now and again we’d clop down the country lanes when there was time. As soon as we started riding the Thelwell books appeared in the house. Luckily for us, none of their chestnut mares were as unruly as Thelwell’s, although there were a few close calls. Though I never got thrown, it was quite clear most of the time as to who was in charge. although there was never a darn hat that seemed to fit. Although I don’t think those riding hats were ever made to fit. I suppose I just looked more idiotic wearing one than everyone else.

One girl working there had a massive jet-black stallion called Legend. For a nominal fee he’d occasionally graze in our field that adjoined the stables. He was a magnificent beast but never really got on with our goats and donkey. Maybe he decided they were beneath him, which, just on physical stature alone, they obviously were. With legend showing them no interest, they would have to push off into the fields with the cattle and have a merry old time there instead.

(As a quick aside, on many occasions when they were off grazing in the second field behind the house, when the goats were called for milking of an evening, this pair of black and white British Alpines would appear in the far gateway and come trotting back toward their shed. Behind them would be the grey donkey and then behind her would be sixty-odd head of cattle wondering what was going on but deciding it was a right lark to find out. Amazingly the goats never got mown down in the ensuing charge).

Anyway, looking back over the Thelwell pieces, although most of the books back then collected together the more simple black and white cartoons, which were like quick gags, those colour illustrations really are terrific. Like those Giles illustrations you posted a while back, Norman Thelwell really was a master craftsman of detail and composition as well as nailing the humour of the situation perfectly. I may be wrong but the way he gently pokes fun at these British pastimes, there almost seems to be something of the wonderful John Betjeman in his work. Although of course he was a talent in his own right.

Thanks for a great reminiscence, GD!

You are right to praise the craftsmanship of Thelwell's cartoons and the comparison with Giles is interesting since both artists drew highly naturalistic settings peopled by cartoonish characters - an anomaly that we never seemed to find distracting.

In fact, the exhibition includes quite a few examples of Thelwell's early art and it is fascinating to see the influence not just of Giles but also of Searle and Emett on the young artist's developing style.

The analogy with Betjeman is apt: artist and poet share a gently mocking tone coupled with affectionate indulgence.

The goats were called Harmony and Sapphire. (I can still hear my mother’s voice as she called them from the patio). After Harmony was taken to see billy goat stud they were joined by Dolly Bell.

The problem with that particular memory is that whenever I watch The Return of the King, when it comes to the Men of the West preparing to battle the Orc legions at the Black Gate and the two hobbits set off ahead of everyone else, the pair remind me of the goats with the cattle merrily galloping behind. I wonder, would that make the donkey Gandalf?

Sir Ian in a donkey skin, now there's a thought!

You ought to write a story called A Goat Named Harmony, it would sell!

My grandfather's nephew was Norman Thelwell, yes this is true, I found that out a couple of weeks ago, when my grandfather, Ron Thelwell, passed away (1915-2010), and he may rest in peace. Ron had a fantastic career, and he was the designer for the Dove shampoo logo.

Though I've never met Norman Thelwell, nor has my parents, but my grandmother has, and I saw some of Thelwell's drawings at the Cartoon Museum and his drawings were very funny, he was a skilled watercolourist.

STEVEN - Thanks for sharing this with us. I also wish I had the privilege of having met Norman Thelwell because he was a fabulous draughtsman and a great comic artist. I hope you enjoy knowing that you are related to such a wonderfully creative talent.

Brian, I understood excatly what you mean, I'm very good at drawing cartoons, and I think I've been inherited by my Dad's side of the family over the years. My Dad's daughters (my sisters), were very good artists. My grandfather, Ron, was a designer for the Dove logo, and I think its a very beautiful design, my family had talent over the years! Although my dad's not bad at drawing, I think.
However on my mother's side, they had been useless at drawing.
Although Norman Thelwell isn't really related to me, because he's my grandfather's nephew, but I still think its an in-heritage.

I think there is some level of being related there! :) As for the Dove logo: simple, effective and memorable - exactly what a logo should be.

Now that you have mentioned a bit on Thelwell - I too, today made a bit of a tribute to Norman Thelwell and I've explained a bit about him and how I'm a bit related to him on my blog.

I feel proud of having my step-grandfather who designed the Dove logo and his nephew was Norman Thelwell.