I sincerely hope yours doesn't come with existing residents...

As to what you put on top of the tree, some people prefer to have a Fairy rather than an Angel - although (judging from their comments yesterday) obviously not most of my female readers!

Anyway, many years ago, I wrote a sketch for that superb comedienne, Dora Bryan, about the seasonal contemplations of one such young lady perched amongst the uncomfortably spiky needles of the topmost limb as the average family Christmastide unfolded.

Sadly (being composed in the pre-computer days of typewriters) I don't have a copy with which to entertain you - although maybe that is just as well, since the jokes are probably a lot funnier in my memory!

So, in compensation, here's an appropriate fairy from Flower Fairies of Winter, by Cecily Mary Barker... 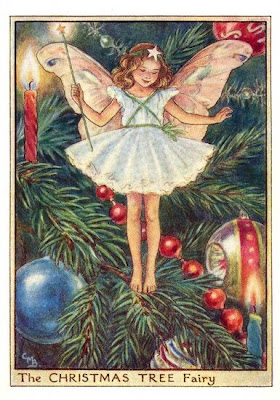 The little Christmas tree was born
And dwelt in open air;
It did not guess how bright a dress
Someday it's boughs would wear;
Brown cones were all, it thought, a tall
And grown-up Fir would bear.

O little Fir! Your forest home
is far and far away;
And here indoors these boughs of yours
With coloured balls are gay,
With candle-light, and tinsel bright
For this is Christmas Day

A dolly-fairy stands on top,
Till children sleep, then she
(A live one now!) from bough to bough
Goes gliding silently.
O magic sight, this joyous night!
O laden, sparkling tree!
Personally, I've always thought that Ms Barker (1895-1973) was a rather better artist - with her meticulously precise botanical observation - than she was a poet.

However, she definitely has sustained reader-appeal since her Flower Fairies books (which started in 1923 just a few years after the sensation caused by the supposed sightings of the Cottingley Fairies ) are still best sellers.

You can discover (or, perhaps, rediscover) more about the Flower Fairies on their Official Website which, I would suggest, they ought to re-name (in-joke for Shakesperian scholars coming up) Official Cobwebsite!

Anyway, whatever you put on the top of your tree, the Christmas Fairies will be wishing you a...
MAGICAL HOLIDAY!
And here they are to prove it... 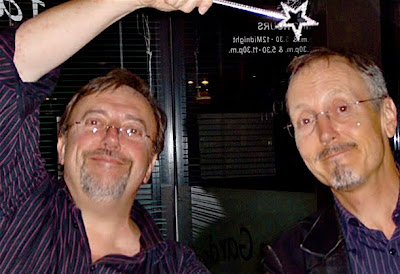 Oh, how I wish that you still had a copy of that sketch! I'm sure it was delightful!

The little fairy-girl in the illustration doesn't look perturbed in the least at the tree-needles under her bare feet (wait until she encounters a couple of the things in the carpet after she's sure she's vacuumed that spot fifteen times since Christmas...)

Lovely picture of the two of you! Merry Christmas, Brian and David!

(I have a star atop my tree. No angel (male or female) no fairy. Dad always insisted on a six-pointed star, and made same himself to top the tree. I carry on the tradition. My decorations are at my blog.) (I'm now contemplating whether or not I've ever seen a male angel topping a tree, and may have to do something about that for next year...)

We're science fiction fans. We have a Dalek atop our Christmas tree!

I love the Flower Fairies and I collect anything I can find with them (which isn't much over here!)I am a Dr Who fan and am most intrigued by the Dalek on top of your tree Laurie Mann! What have you got decorating the rest of the tree? Mr Ood? Tardises?Merry Christmas everybody!

Nice photo, but the costumes need a bit more work. If you would like to borrow them for your next appearance, I have a lovely set of wings, tiara and wand from my role as Fairy Godmother in a pantomime a few years ago.

My mother's comment on my performance: "If they want Sheila to fly, they're going to have to give her bigger wings than that."

Have a lovely Christmas!

And what delightful fairies you are!

I hope that you and Buttons have a wonderful, relaxing, mishap-free Venetian Christmas & New Year.

not to pick nits, but shouldn't that be Cicely Mary Barker?

You're right, MATT, thanks! Correction made!

Why do the flower fairies never wear shoes?

Presumably, because they are in flight-mode so much of the time that they rarely if ever need to walk...