It was in the comments section of a post I wrote about the unsung lyrics to the Bewitched TV theme song, that the story of the unheard lyrics to the Star Trek theme song came up.

The scandalous facts are as follows... 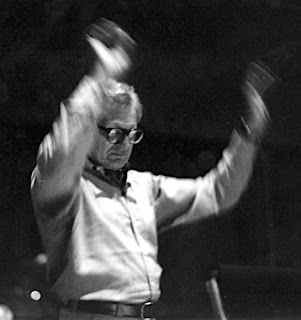 The music for the pilot show in the series was written by Alexander Courage (left). At the time, the job probably seemed an unlikely long-term earner, but Courage was a pro: he arranged and orchestrated on some of the greatest movie musicals, including Show Boat, Seven Brides for Seven Brothers and Gigi and, until his death in 2008, worked on dozens of films and TV shows, orchestrating for John Williams on Superman and Jurassic Park and Jerry Goldsmith on Mulan, The Mummy and - er - Star Trek: The Motion Picture!

When, back in 1966, NBC picked up the Star Trek pilot and the show started its initial three-year run it was soon clear that it was heading off towards the much-sought-after and highly lucrative galaxy known as syndication. Alexander Courage could now expect to earn some decent royalties for his memorable theme tune.

But that was when the series' creator, Gene Roddenberry, stepped onto the flight deck of the Enterprise brandishing a piece of paper containing the 'lyrics' to the theme tune and laid claim to a half-share of Courage's royalties as 'co-composer'.

According to Courage, he had been pressurised into a 'hand-shake deal' that gave Roddenberry the option of writing lyrics although the contract he signed to that effect, he maintained, was done so unknowingly. Whatever the preliminaries, Roddenberry clearly saw the writing on the balance-sheet and cashed-in his option by writing lyrics that, whilst never used, generously contributed to the Roddenberry bank balance. Courage subsequently quit the series.

So, what are those mysterious lyrics?

Well, here they are - together with the original TV credit sequence - so you can sing along with Mr Roddenberry's money-spinning little ditty...

Beyond
The rim of the starlight,
My love
Is wand'ring in star-flight.
I know
He'll find in star-clustered reaches
Love,
Strange love a star woman teaches.
I know his journey ends never.
His star trek
Will go on forever.
But tell him
While he wanders his starry sea,
Remember, remember me.

OK, off you go... And good luck! Personally, I can't get beyond the sixth line, although, frankly, that's more than enough!

Ahhh I can just imagine the William Shatner spoken cover!

uh, wow. I like the non-lyric version so much better. It still gives me little goose-bumps and I just don't think it would have the same effect for me with them.
Thanks for the Trekkie-trivia!

And he wanted to be paid for that? O.M.G.!
nonscal: a collection of meaningless words affixed to a tune as an afterthought and which don't match...

I'm glad they decided not to bother with the lyrics!

Never knew the full story behind that, Cheers
Hey Brian have you ever heard Lorne Greene's sung version of Bonanza ? Its in a class of its own.

I don't think Mr Roddenberry gets any of your votes! And quite right, too!

As for Lorne Greene singing Bonanza, I'm going in search of it NOW!!

Brian, actually there is a Bonanza version sung by all 4 stars, from the end of the pilot episode. Yes you get Pa, Adam, Hoss, and Little Joe singing the little heard lyrics to the map blazing classic. Weird fact too, that in the show, all three of the sons were only half brothers, all having different Mothers.

I'm no big Star Trek fan ...honest but I do have a picture disc of the soundtrack LP to the first ever Star Trek episode - The Cage. I can't recall it having any lyrics on it so maybe it was a narrow escape !

BOLL WEAVIL - "A picture disc of the soundtrack LP to the first ever Star Trek episode..."? It may be time to start selling on ebay, Boll!

BILL FIELD - Thanks for the Bonanza trivia. I've managed to find Lorne Greene's performance of the song referred to by NEIL-W (and a rendition by Johnny Cash!) but not (yet) by the Cartwright Family Singers!

Not the kind of lyrics that would have had Johnny Mercer quaking in his boots. Maybe he should have shoehorned the word 'star' in a few for times. What a repellent money grabber.

I had a listen to the Bonanza song. I wouldn't call it that desirable. Still, at least the blood has stopped leaking out of my ears.