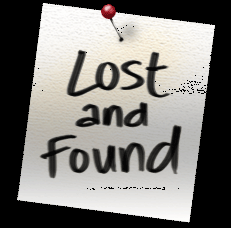 Monday evening in a nice little Italian restaurant in London where we eat every week with members of The Magic Circle, I had my much loved, world-travelled Tumi bag stolen…

How did it happen? I hung it on the back of my chair.. Yes, I know! An act of rank stupidity that I’ve cautioned so many others about…

But what is most disturbing is that it had to have been taken by someone who was dining at one of the nearby tables.

Lots of late night calls to police, credit card companies etc were a tiring addition to the distress of losing the bag and its contents.

Then, Tuesday morning comes a phone call from a chirpy young lady at Holloway Bus Garage in north London. “Have you lost anything?” she asked, presumably thinking that I had carelessly left my possessions on a bus.

“Well, I had a bag stolen last night,” I told her to which, in a rather more sober voice, she told me that she had it safe and sound in Lost Property…

A two-hour round trip to Holloway Road reunited me with my Tumi and, miraculously, some of the contents...

LOST
* Folding umbrella (It was raining)

* Oyster card (Stopped, so of no use)

* A rather nice, new pink silk tie (Stylish selection on the thief’s part!)

* Nokia mobile phone (Old but still serviceable but, with the sim card stopped, no use to them or me)

* Packet of Germoloid Tissues (Hurrah! At least the thief’s got piles!)

* Ventolin inhalers (So the thief doesn't have asthma as well as piles; pity!)

* Leather credit-card wallet (A 50th birthday gift, so I’m glad to have that back)

What was a Very Lucky Escape was that Buttons wasn’t along for the ride as he quite often is (see below); although he says that if he had been in the bag, then he would have Made a Loud Noise Enabling the Thief to be Apprehended! 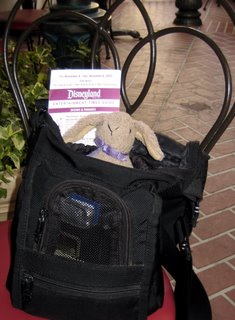 Central London has become a nightmare for professional thieves and pickpockets in restaurants and bars. As you know earlier this year some American friends had their bag stolen in pretty much the same circumstances as you describe on their first night in London. We still haven't figured out how he/they did it. It ruined the holiday of a lifetime for my friends, and is all the more upsetting because the victim feels terrible guilt as if it was their fault.

Thats bad luck.Its always the invasion of privacy that hurts worst when this osrt of thing happens.At least you got a bit of stuff back. Maybe this is the time to replace your camera with the Nikon DS80.

Of course! It's just dawned on me! The thief was very probably a Nikon sales rep!! I wonder what they do with all those Canons they go around nicking?!

How awful! A very selective thief - hope he/she blows their nose with those tissues!May be there's a clue on the bus cctv.....?

So, what are we looking for here? A stylish thief, who smells nice and has piles, but apparently doesn't get breathless. Seriously though, I do sympathise... it's terrible when people invade your private space like that. I won't even let my daughters look in my handbag!

How terrible for you Brian. Any sort of invasion of privacy can be rather un-nerving, but I am glad not all was lost for you. Especially Buttons!!!

Thanks for all the expressions of sympathy! It was an oddly traumatic experience - made all the more bizarre by finding - when I got a new phone today and installed my old number - that the stolen phone had obviously got switched on and had recorded a muffled conversation (from inside the bag) between the thieves... Strangely voyeuristic...

It just gets curiouser and curiouser.
My condolences. :(

Must have been quite a trauma for you Brian. Final outcome could have been so much worse. I'm pleased to learn that you at least recovered some of your possessions. It is indeed odd what was taken and what was left though.

NB: Clearly you're relieved to have so much back safely but do you really think it's a good idea to list out what you carry around with you and the detailed contents of your wallet? It's what was never there that worries me.

Horrible, horrible thing to happen, and especially in a place in which we are all so comfortable.

It must be hugely reassuring that they returned so much that could have been the basis of a nasty bit of identity theft.