In common with many other folk, I am currently taking a LOT of daily medication - pills for this, capsules for that. Some are once, twice or three-times a day, some are only once-a-week and on the day you take those there are others that you mustn't take.

It's potentially confusing and, although only two-thirds of the way to my dotage, I make mistakes: forgetting this or that dose just too late to squeeze one in before the next. Now, if I'm challenged by this regime, how much harder must it be for those who are (really) elderly or have sight-impairment? In fact, having lived in close proximity to several veteran pill-takers, I don't even need to ask the question, I know the answer...

I mention this as a prelude to a quick rant against the drug manufacturers in this country who seem incapable of agreeing on colour-coding for pills and capsules.

Two of my drugs have changed colours - one of them twice - in less than a year, which means that just when you've got used to remembering that blood pressure equals a pink-and-white capsule it suddenly becomes a pale-green-and-white capsule and then, only a month or two later, inexplicably changes again into a yellow-and-white capsule! 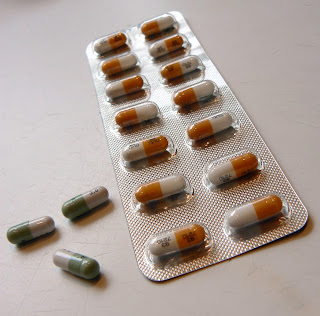 So, why use any colours if they're not important? I bet that even among those clever pharmaceuticalists there are those who avoid orange-coloured Smarties or green-hued Wine Gums! So, why not just settle on a colour combination and bloody well stick to it, then everyone knows where they are and - more importantly - what they're on!
Posted by Brian Sibley at 00:01

I can have some sympathy with you Mr B. I consider myself a fairly healthy person but even I take 3 pills to kickstart the day ! We have to trust the doctors I guess.Only a couple of weeks ago when Miniboll was in hospital and feeling very sick from the drugs they were giving her, we questioned the number of pills because it was actually making her ill instead of better, only to be told "Don't worry, we can cure that. We have a pill for it" So then, we have an antidote to the illness that's caused by the pills we're giving to stop you being ill...I'm sure something is not quite right here.

Doctors may be reluctant to explain the "Why?" and "How?" behind the drugs they feed us lay-folk, but we still need to keep asking the questions...

Indeed we do need to keep asking.

I do a lot of promotional work for big pharma, and the major drug companies change the packaging and pills themselves on a depressingly regular basis.

All well and good for those of us contracted in to do redesigns (though I don’t design the pills themselves - I have no idea who does that and what obscure criteria they use for their colour schemes), but terribly confusing for those of us actually taking them.

In defense of the pharma companies, the National Institute for Clinical Excellence (NICE) in the UK interfere so much with what goes on (quite rightly in many areas), it doesn’t surprise me that there’s no coherent design for delivery systems.

My mum ended up completely delirious and hospitalised on a cocktail of diazepam, diclofenac and co-codamol not because the GP was just prescribing random pills, but because, when asked to describe what was wrong, she maintained that she’d trapped a nerve or pulled a muscle in her back. She actually had a kidney infection and septicaemia, so the drugs just kept piling up in her system, and couldn’t be flushed out. She may well have taken way more than the dose prescribed because, by the time she was admitted, she didn’t recognise me or know where she was.

The GP was horrified, by the way.

The government here is pushing (not terribly well) for NHS patients to become “expert patients” - to educate them about their condition so that the patient becomes much more involved and informed about the treatment. All well and good, if GPs didn’t generally look disdainfully at those who are able to use medical terminology, prescribers didn’t just give you the drugs and want you to go away, or hospital doctors weren’t so rushed that they could really do without a relative actually being able to do a differential diagnosis himself.

And come up with things they hadn’t thought of.

That then prove to be the case.

Keep on asking, everyone!

The trouble is, after centuries during which the mystique of medicine went unchallenged - even unquestioned - convincing patients to ASK and practioners to ANSWER is quite a task...

I am obviously very lucky in the medical practitioners I see, and with sundry boring ailments they are many and several!

I have always been encouraged to ask questions, respected for having a brain and involved in discussions about what to do next. I had better do some blessings counting.

Do agree about pill colours though, I take 5 different pills and insulin, just about keep on top of changes, but did panic slightly and read bottle carefully when presentation of insulin bottle changed.

If I was 80, couldn't see, or whatever, it might be a different story.

Color coding pills is a great idea. It would make things so much easier.

Well it OUGHT to be, Katie - but they keep changing the colours - and the packaging!

Blind people actually may be better off than other people in one regard, since some medicines have packets with the drug details written on the box in braille.

I've noticed it also depends on whether or not the dispensed drugs are generic & you've no idea which sort you'll given. This happens frequently if you have a chronic condition.
Then you read the accompanying leaflet & frighten yourself witless reading the side effects!
I've found homeopathy a very useful alternative & the initial hour's consultation is very revealing & the remedies effective.

I find little white pills the worst - often it is very difficult to distinguish between them.

My mother found something very helpful - it was either in a pound shop, or a supermarket. It's a stack of seven different-coloured plastic pill boxes each with the day named, with three compartments - a large one for am, and two smaller ones for noon and night. It means you can get your pills organised for the week ahead.

Mind you if, like me, you take a number of supplement capsules - cod liver oil,evening primrose oil, vitamin C, Echinacea etc., it does use up a lot of the space.

Not content with changing the colour of their pills, many manufacturers seem to go for quite esoteric, vague or generally soft colours. Ones that make it even harder for people who are colour blind. Nice.