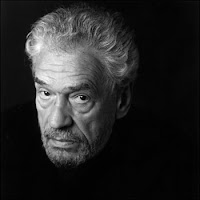 Paul Scofield is sitting on a train, reading a script and minding his own business when a man gets into the carriage, notices him and decides to engage the actor in conversation.

"It is Paul Scofield, isn't?" asks the man excitedly.

"Really?" says the actor with a certain sinking feeling.

"Oh, yes!" says the man, warming to his theme, "I've been in a great many productions with the Upper-Twittering Amateur Dramatic Society..."

For the next thirty minutes, the man reels off details of his theatrical triumphs: the Agatha Christie murder mysteries, the Ben Travers farces, the open-air summer productions of Shakespeare and the Christmas pantos. He relates funny stories about actors forgetting their lines, missing their cues, tripping over the set, dropping props and ripping costumes in embarrassing places... Throughout Scofield listens in stoic silence.

Eventually the train arrives at the man's station and he gets up and shakes the actor by the hand. "It's been lovely to chat," he says as he opens the carriage door and steps out onto the platform. Then, as he goes to close the door, he smiles at Scofield and says with a chuckle, "I don't know, Paul, why do we do it?!"

(mr. Scofield is one of my favourites)