For most of us the teddy bear was -- perhaps still is -- a loving friend, devoted companion, loyal confident. Not, however, it seems for everyone...

A few months ago, I spotted a Teddy Bear chair in Harrods that people were literally queueing up to sit in... 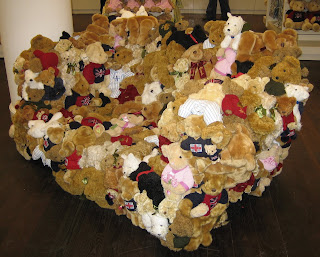 I thought that was pretty inhuman - or inursine - but now, thanks to my friend, Polkadots, I am in a state of advanced trauma from having visited the Foley Gallery to look at the latest 'works' by artist Kent Rogowski: an exhibition of over 50 images (on show until August 10th) and a book devoted to bears --- but not as we know them, Jim!

WARNING!
SHOCKING IMAGES ALERT!
Mr Rogowski has become the Damien Hirst of the toy cupboard by taking teddy bears (or - as he calls them "ordinary stuffed animals"), turning them inside out and then -- I can scarcely type the words -- re-stuffing them! 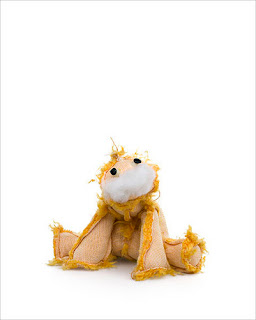 The images form a taxonomy of strange but oddly familar creatures.

Each bear's appearance is determined by the functional requirements of the manufacturing process. Simple patterns and devices that were never meant to be seen are now what form the bears' physical traits and give each of them a unique personality: their fasteners become eyes and their seams become scars... 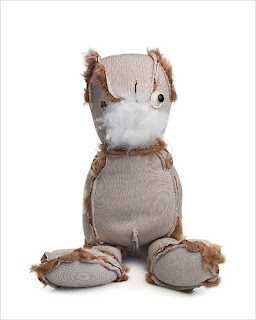 The images inspire a range of interpretations and conflicting emotions. They are at once hideous yet cute, disturbing yet endearing while they offer metaphors for our own experience. These bears, which have lived and loved and lost as much as their owners, have suffered and endured through it all. It is by virtue of revealing their inner core might we better understand our own. * 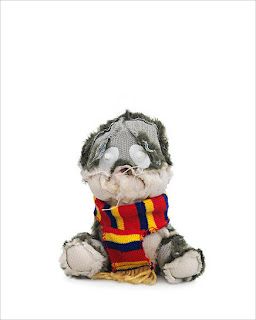 Yes, well, all I can say is that in this house, those re-stuffed metaphors met with a pretty hostile reaction... 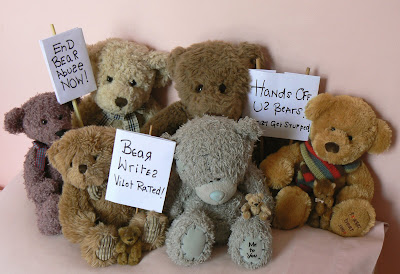 * A further explanation for such blatant bear brutality is given in the Foley Gallery press release for the exhibition:

Foley Gallery is pleased to announce Bears, an exhibition of photographs by New York-based artist Kent Rogowski.
In this body of work Rogowski presents a delicate and sensational series of teddy bear portraits. The bears appear different than ordinary stuffed animals. They have been turned inside out, re-stuffed and sewn back together, transforming them, creating entirely new creatures. The result of this enabled metamorphosis is a new kind of bear, sometimes grotesque or pathetic but often rather endearing. These new emblems no longer sustain the perfect image of childhood, but break apart this image into a complex picture of youth and development.
Photographed on a stark white background, the bears are removed from any relevant or meaningful context. They are placed in an environment where they appear as specimens to be studied, separate from any memories a viewer may associate from their own teddy bear experience. The neutral setting emphasizes comparisons between the bears. The revelations of the bears' innards are strong analogies of how people may differ from the inside out.
Rogowski's interpretation of this childhood staple raises questions about childhood security. A stuffed animal's pleasant and cuddly outward appearance may mask or misrepresent what is happening inside. More literally, a happy outside may be hiding the inner drama of a child. This symbol of childhood comfort has, by way of Rogowski's process, been altered and skewed.
Kent Rogowski received his MFA in Photography from the Rhode Island School of Design in 2000. He has received many awards, including the Center Award from the Center of Photographic Art, and was selected as a finalist for the Calumet/Friends of Photography Emerging Artist Award and the Nerve.com.

One of your protest bears should be saying "We can't BEAR it!".

I think it's about time someone told Kent, in no uncertain terms, to Rogowski!

Glad to say I don't understand art either. Both the images and his explanation are just rubbish to me.

Poor teddies! I shall have to keep niki away from the computer for some time to come so he won't see all that! He's in a bad enough state as it is, even considering his grand old age!

How ever much he "explains" it. That is just not right.

What an unbearable situation! Of course the horror of the story has filtered through to our household too - go read all about it....

Thanks, Diva... Click here to read about the protest being staged by the Bears of Borehamwood.

I found these inside-out bears fantastic
maybe too bold for most teddybearlovers.
I think it's a beautiful concept and the bears
have great graphic potential

James - I crawled all through their labyrinthine website but couldn't find it - but perhaps that's just as well...

The Guardsman upholstery is 'behind' the installation in the first photo here - you just have to visit the gallery to see those teddies in their mutilated pomp!

No, I didn't attend the party photographed further down the page...

Are there any Teddy Bears Dressed as Other Animals?

SPINNING GIRL - Inside Out AND Dressed as Other Animals -- I DO so hope not!!

However, I have noticed that Disney Toy Makers have been producing Pooh Bears dressed as other creatures (such as bees and things) - which is disturbing...