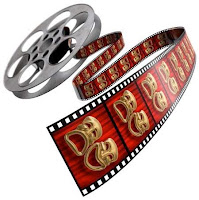 I know it's hard to believe, but there's only two more episodes of David Puttnam's Century of Cinema, to go!

Next week: a brand new programme bringing the story of the movies up to date with a look at what's happened in the decade since the series was first broadcast.

Meanwhile, there are seats in all parts for the fifth installment of our centennial celebration of film, in which David Puttnam and I look at the British film industry.

You'll hear Ken Annakin and Richard Curtis talking about the Ealing studios and their classic comedies like The Ladykillers and Kind Hearts and Coronets; Richard Attenborough recollecting the work of the Crown Film Unit founded during WWII; Michael Caine on The Italian Job and Get Carter and Dirk Bogarde remembering the revolutionary impact of a new style of gritty filmmaking which began with The Blue Lamp and the groundbreaking - and heroic - Victim, the story about a gay barrister being blackmailed (made at a time when homosexuality was still illegal) as well as, in lighter vein, the 'Doctor' series that was a prelude to the rather more raucous Carry On films.

We also look at the Bond franchise and talk to Michael Apted who, when we made this series, was directing The World is Not Enough.

You can hear David Puttnam's Century of Cinema - 'Reel 5: The British Are Coming!' - on BBC Radio 2 at 10:30, and, if you miss the transmission this evening, it can be heard again for seven days via the BBC iPlayer.

And, until the transmission of tonight's episode, you've still a few hours left to catch 'Reel 4: Something for Everyone', which looks at some of the most popular and enduring movie genres.
Posted by Brian Sibley at 00:01

I miss those Sunday afternoons watching the classic British movies. It’s one thing the BBC should be required to bring back as a service to the new generations who have missed them all. Those Ealing comedies were just genius, from:

“I shot an arrow in the air; she fell to earth in Berkeley Square.”

“I said nobody was to do Mrs. Lopsided!”

Years back, when I was writing articles about the RAF for a short while, I spent a fair bit of time down in the IWM archives, looking through all the material pertaining to the Royal Air Force Film Production Unit, which had been set up on the suggestion of Air Commodore Sir Harold Peake. It was utterly fascinating.

Unlike the Crown Film Unit who, with shorts like Coastal Command and Target for Tonight portrayed aircrews in a heroic light, the RAF FPU were more concerned with the everyday experiences of the servicemen and women. By the final years of the war they had four units operating around the world: No.1 RAF FPU based at Pinewood and using the air station as Benson; No.2 RAF FPU covering the Mediterranean theatre of operations; No.3 RAF FPU covering the Far East; and No.4 RAF FPU formed just months prior to D-Day to cover the invasion of Northern Europe.

Amongst the directors (which included Jack Clayton) there was John Bolting making shorts like Between Friends and Towards the Offensive before the feature-length Journey Together while his brother John (along with Alexander Mackendrick) worked for the Army Film & Photographic Unit. Luckily they all made it through the conflict and went on the bigger and better things. I suppose you could say that having witnessed what they did, there’s no wonder that their films were laced with a particularly dark and cutting sense of humour.

Anyway, another great edition. The trailer for Thunderball had me choking with laughter. Mr voice-over man was really giving it his all. A shame that the time constraints meant there wasn’t room for both Powell & Pressburger (other than a brief name-check) and Hammer Films. This is why I think both you and Lord Puttnam should have a regular radio slot covering past and present movies.

What great stuff you bring to this blog with your comments! The information about the RAF FPU was fascinating. A very interesting series could be made on the subject of war documentaries and propaganda.

And yes, P&P need their own programme, too: A Matter of Life and Death and The Life and Death of Colonel Blimp, that I seem to remember is a movie you particularly admire.

As for DP and I having our own R2 slot - I'm not sure how soon that's going to be commissioned! ;)

Well, it’s your writings that feed the comments.

There really is the material for a great series about war documentaries and the various propaganda films. Amongst the many, many documentaries I taped over the years is D-Day to Berlin which featured the material that the great George Stevens and his unit shot. I think they were with the first troops to enter Dachau, so they must have seen the most horrific things on their journey from the beachhead to the ruins of Berlin.

Then there was William Wyler, directing The Memphis Belle for the First Motion Picture Unit, the USAF’s version of the RAF’s FPU, and John Huston’s incredibly controversial Let There Be Light.

Obviously it was all utterly grim stuff and brought about a shift in tone to their films when they got back home, which is why whenever I hear that idiot Tarantino flap his mouth about how violence and war are “really cool” I wish that somebody would just walk up and give him a slapping.

And then there are the wonderful propaganda movies like 49th Parallel and One of Our Aircraft Is Missing. Ah, Michael Powell and Emeric Pressburger! What a truly amazing run they had through the 1940s: The Life and Death of Colonel Blimp, A Canterbury Tale, I Know Where I'm Going!, A Matter of Life and Death, Black Narcissus, The Red Shoes and The Small Back Room.

And yes, if I was stranded on a desert island with only one movie it would be The Life and Death of Colonel Blimp.

As for a regular Brian Sibley & David Puttnam radio show, I think we should all band together and make the Head of Radio 2 and offer they can’t refuse.

"Last night's programme kept up the standard. Excellent listening - but I agree it's not long enough. A regular series is a must!"