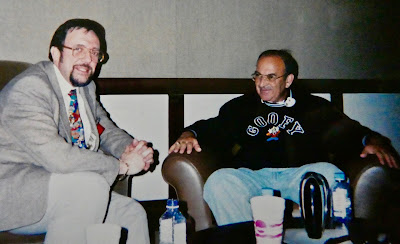 It was with great sadness that heard of the death of a long time (some 30+ years) Disney friend, Marty Sklar. Rightly known as Walt's 'right-hand man', he wrote the first book about 'Disneyland' and worked with the Boss on speeches and many important projects including writing the script for the promotional film that introduced the world to Walt's concept of an Experimental Prototype Community of Tomorrow, shown a matter of weeks before his death in 1966. His role in expanding the Disney theme park franchise from its Anaheim origins to the four corners of the world, is a legendary legacy.

I had the great pleasure to work with Marty on a number of BBC radio programmes about Walt Disney and the Disney company and he provided the title – ‘Waltopia' – for a BBC TV documentary I made in 1982 on the creation of what was by then called EPCOT Center. During my interview with Marty, he recalled how, on first hearing of Walt's plans for a futuristic city, he had quipped: "You know, Walt, I've got the perfect name for your project – Waltopia!" Not only did Marty supply the show's title, he was the film’s opening and closing contributor with a number of appearances in between!
And when my producer Norman Stone and I went out to join the press contingent covering the opening of EPCOT, it was Marty who ensured that on the night before the opening day ceremonies – while the rest of the press corps were being entertained at Rosie O'Grady's nightclub in downtown Orlando – Norman and I had invitations to the exclusive black-tie party for the dedication of the park's iconic attraction, Spaceship Earth.
I have many fond memories of Marty, but one that I especially hold dear was being invited to the opening of the French Pavilion at EPCOT's World Showcase. During the ceremony, Marty spotted me seated on the elegant gilt chairs arranged outside the pavilion. He took something from his pocket, wrote on it and then, catching the attention of a cast member, indicted that it should be delivered to me. It was one of his business cards on which he had written: "Brian! This is some sort of Utopia where a Brit gets invited to the opening of France in America! Marty."
I had first become aware of the name 'Martin A. Sklar’ many years earlier when, as a young Disney fan living in the UK (without any hope of ever making it to California), I was given a copy of his book on Disneyland, brought back for me by some rich friends! Years later, when I realised that the author, 'Martin A. Sklar', was the same 'Marty' I had got to know at (as it then was) WED Imagineering, I carried it all the way to LA in order to get it signed!
Marty was one of the great unsung heroes of the Disney kingdom and I – like many others I am sure – came to value his insights into Walt and his world along with his integrity, candour, quite authority and personal modesty. More than that, I treasured the relationship I enjoyed, across a number of years with him: his friendship (much more than just professional courtesy) meant a great deal to me and I fondly salute his memory.


Here's a typical note from Marty: a truly gracious gentleman of great charm... 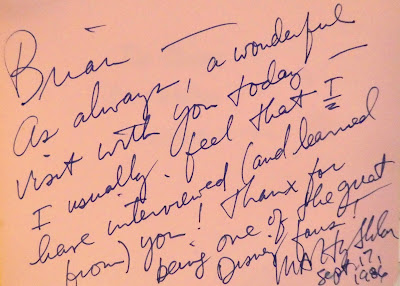 Marty Sklar, the man who supervised the design and construction of Tokyo Disneyland, the Disney-MGM Studios, Disneyland Paris and other theme park attractions, has died at his home, Disney said tonight. He was 83.
Having started as an intern for Walt Disney, Sklar finished his 54-year career at Disney as the International Ambassador for Walt Disney Imagineering. That role meant traveling to art and design colleges and architecture schools to lecture and attract talent.
During his career, Sklar worked closely with Walt Disney and was instrumental in creating, enhancing and expanding Disney’s creative vision. Sklar was named a Disney Legend in 2001.
“Everything about Marty was legendary – his achievements, his spirit, his career,” said Bob Iger, Chairman and CEO of the Walt Disney Company. “He embodied the very best of Disney, from his bold originality to his joyful optimism and relentless drive for excellence. He was also a powerful connection to Walt himself. No one was more passionate about Disney than Marty and we’ll miss his enthusiasm, his grace, and his indomitable spirit.”
Born on February 6, 1934, in New Brunswick, NJ, Sklar was a student at UCLA and editor of its Daily Bruin newspaper when he was recruited to create The Disneyland News for Walt Disney’s new theme park in 1955. After graduating in 1956, he joined Disney full time and would go on to serve as Walt’s right-hand man — scripting speeches, marketing materials and creating a film showcasing Walt’s vision for Walt Disney World and Epcot, according to Disney.
During this period, he also joined WED Enterprises, the forerunner of Walt Disney Imagineering, and later would become the creative leader of Imagineering, leading the development of Disney theme parks and attractions for the next three decades. He retired as EVP and Imagineering Ambassador on July 17, 2009, Disneyland’s 54th birthday. Disney marked the occasion by paying tribute to Marty with the highest Parks and Resorts recognition, dedicating a window in his name on Disneyland’s City Hall.
“Marty left an indelible mark on Disney Parks around the globe and on all of the guests who make memories every day with us,” said Bob Chapek, Chairman of Walt Disney Parks and Resorts. “He was one of the few people that was fortunate to attend the opening of every single Disney park in the world, from Anaheim in 1955 to Shanghai just last year. We will dearly miss Marty’s passion, skill and imaginative spark that inspired generations of Cast, Crew and Imagineers.”
He also authored books about Disney including Dream It! Do It!: My Half-Century Creating Disney’s Magic Kingdoms (2013), and One Little Spark!: Mickey’s Ten Commandments and The Road to Imagineering (2015).
Skalr is survived by his wife of 60 years, Leah; son Howard and his wife, Katriina Koski-Sklar; grandchildren Gabriel and Hannah; daughter Leslie; and grandchildren Rachel and Jacob. In lieu of flowers, the family requests that donations be made in Marty’s name to Ryman Arts.
Posted by Brian Sibley at 19:57 2 comments

Some may suppose that the American Eagle is still the national bird of the USA, but I think there may be a contender hoping to rule the roost.

This usurper comes to you via the talents of my friend, artist and mosaicist, Martin Cheek, who has created this mosaic portrait of 'Donald'... 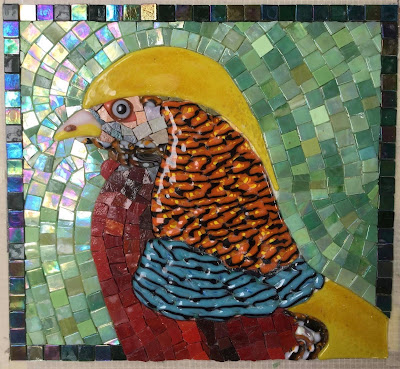 
Media: My own hand made murrini and glass fusions, Mexican Smalti and Sicis Iridium

Description: ‘Donald’ is a golden pheasant. Pheasants are related to peacocks and just like their relatives they like to strut their stuff. Donald is very pleased with himself…..and wants everyone to know it! In China people think of Golden Pheasant as a sign of good luck, best fate and prosperity. 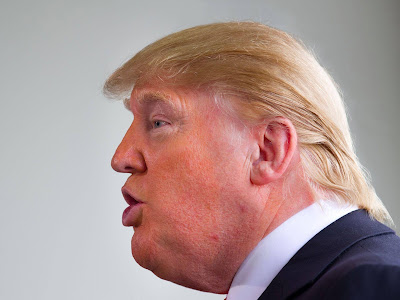 ALL ON A GOLDEN AFTERNOON 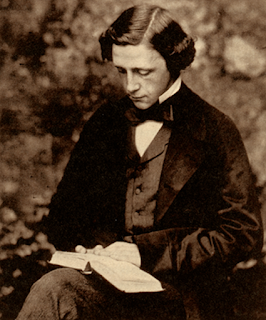 One hundred and fifty-five years ago, today, the Reverend Charles Lutwidge Dodgson and an Oxford colleague, the Reverend Robinson Duckworth, took the three daughters of the Dean of Christ Church – Lorina, Alice and Edith Liddell – on a boating trip.

As they rowed along on that 'golden afternoon', Dodgson improvised a fantasy about the curious adventures of a little girl named (like one of the girls on the trip) 'Alice', who followed a White Rabbit in a waistcoat with a watch down a rabbit-hole and found herself in a true land of wonders...

At Alice’s request, Dodgson wrote out the story – first calling it Alice’s Adventures Under Ground – and added his own distinctively idiosyncratic illustrations. 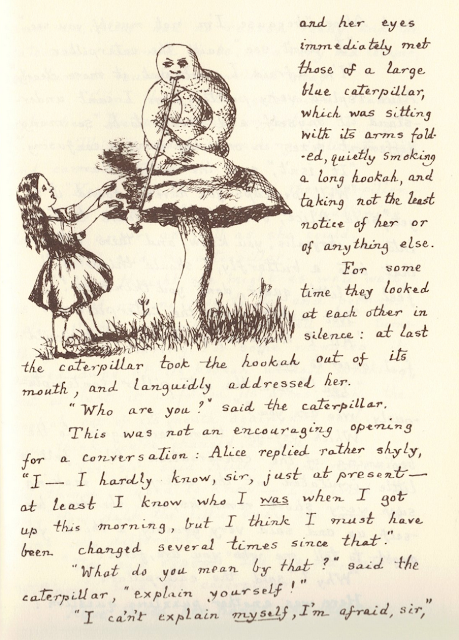 By 1865, it had grown (like someone who had nibbled an EAT ME cake) into Alice’s Adventures in Wonderland and was published under the authorship of 'Lewis Carroll' with illustrations by the legendary Punch cartoonist, Sir John Tenniel. 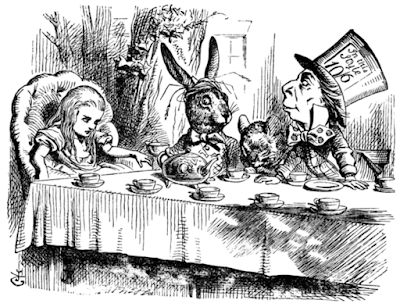 The book was made Mr Dodgson’s alter ego one of the most famous men in Victorian England. It also revolutionised children’s literature by abandoning, at a stroke, the long and piously-held tradition of moral-and-improving tales for the young in favour of zany, witty nonsense that had no underlying message other than fun...

July the 4th is also, of course, American Independence Day and is interesting to note how many true literary successors to Lewis Carroll – among them L Frank Baum, James Thurber, Ogden Nash and Maurice Sendak – have sprung up in America.

But then perhaps this shouldn’t really surprise us, since the Americans have always shown themselves to be far greater lovers and defenders of Wonderland (and Looking-glass World) than the English have ever been…

Maybe there are reasons for this affinity between the American sensibility and Carroll’s nonsense realm: for one thing, Alice is a highly independent and self-determining individual (a truly revolutionary notion for a child’s book of the 1800s); for another, the Wonderlanders with whom she mixes are a wildly disparate conglomeration of diverse species – animals, humans, animals-dressed-as-humans and humans-with-animal-masks – all of whom (for the most part) rub along together but who are, together, fiercely territorial! 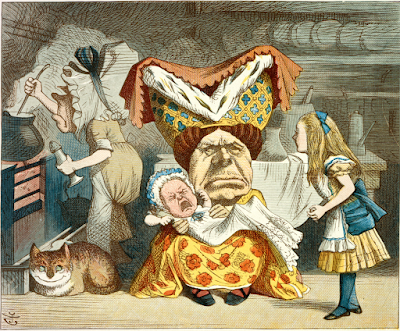 I find it fascinating – and humbling – that, in 1948 (by which time the original manuscript of
Alice’s Adventures Under Ground had been sold and was in the possession of an American collector), a group of US well-wishers, led by the Librarian of Congress, should have started a fund to raise the considerable sum of money required to buy back the manuscript and send it home to us! 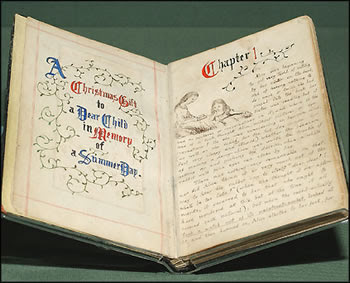 That first foray into Carroll's underground wonderworld now resides in the British Library and maybe we should remember the American act of selfless generosity which made that possible the next time we look at, say, the Elgin Marbles…

Meanwhile, time to raise a cup of tea and join in the toast-----