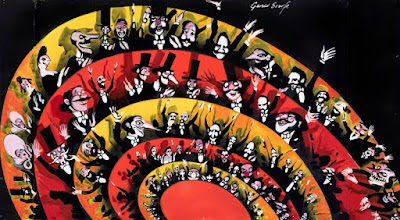 When I was 14 and dreaming of a career as a cartoonist, I had many heroes – Searle, Emett, Hoffnung, Steadman, Trog – but only one true idol: Gerald Scarfe!

I used to cut out his cartoons from papers and magazines and study every pen-stroke: the placing, weight, thickness and trajectory of his line; the audacious angularity of his images; the intensity of his cross-hatching; the relationship between ink and naked paper; the seemingly effortless way in which he conjured all these talents.

It was difficult to know what I admired more about Scarfe: the assuredness of his draughtsmanship or the unrelenting savagery of his excoriating –– for example (a persaonl favourite) Mrs Thatcher's 'Belgrano' nightmare... 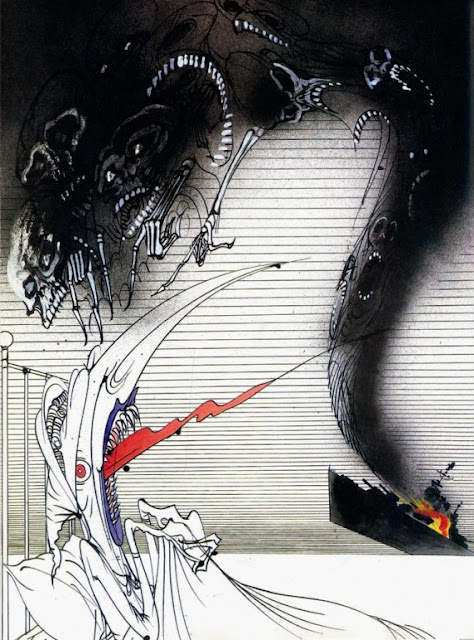 Over fifty years later, my idol remains securely atop his pedestal – the Master of his craft, wielding his pen courageously, unflinchingly pinning the fools, hypocrites and trumped-up monsters and demons of our age to his drawing-board and using their splattered blood to provide the ink for his next assault.

This is the Scarfe we all know. Less familiar, to some, will be the Scarfe currently on show in House of Illustration's latest exhibition: Gerald Scarfe: Stage & Screen, where we find the caricaturist at play in theatre and cinema.

The intimate space at House of Illustration becomes, here, more spacious than might be expected as display cases are transformed into decorated toy-theatre-like boxes containing Scarfe's fantastical designs for opera, ballet and film – drawings, models, props and costumes; while the walls around overflow with his dynamic, literally larger-than-life, drawings.

The projects represented here are those revolutionary productions of The Magic Flute, Orpheus in the Underworld (above) and The Nutcracker that he designed along with his iconic contributions to Pink Floyd: The Wall (1982) and his spiky assault on the cuteness of Disney which the studio astonishingly permitted, having invited him to style their 1997 animated feature, Hercules.

The exhibition opens with Scarfe's stunning designs for Peter Hall's 1993 production of The Magic Flute dominated by a giant bisected pyramid.

In this interpretation, Pagageno and Pagagena were bird people and the stage was invaded by a bizarre menagerie of cross-mutated creatures – an giraffe-headed-ostrich, a crocodile-cum-penguin – escapees from ancient panels of Egyptian hieroglyphs via a Victorian heads-and-tails book. Scarfe's colour palette is alternately rich in the burnished gold of sand and sarcophagus and a deeper-than-deep-blue characterised by the Queen of the Night.

The designs for the ENO's Orpheus in the Underworld (1999) is an elaborate Scarfe burlesque, presided over by a Hades in a horned top-hat and a livid pink and green scaled tail-coat tipped with cartoon barbs – just one of the extraordinary examples of the artist's designs realised in three-dimensions by brilliantly talented costumiers. 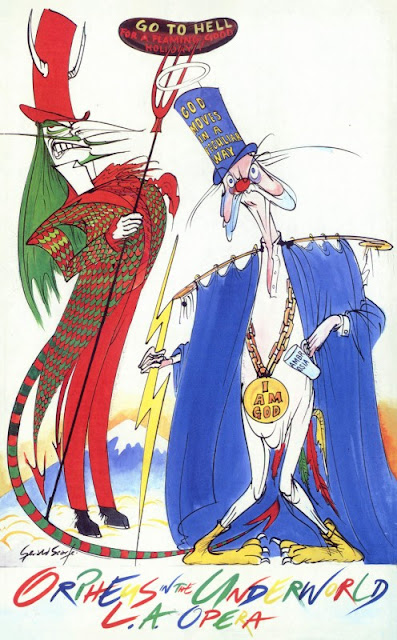 Equally stunning are the costumes for the English National Opera's 2002 production of Tchaikovsky's ballet, The Nutcracker: Herr Drosselmeyer's cloak, a vast swirl of material embellished with mystic symbols; the Mouse King, a menacing skeletal mask and a costume of tattered rags, and entourage of terrorist mice wearing black Mickey-Mouse-eared gas masks. 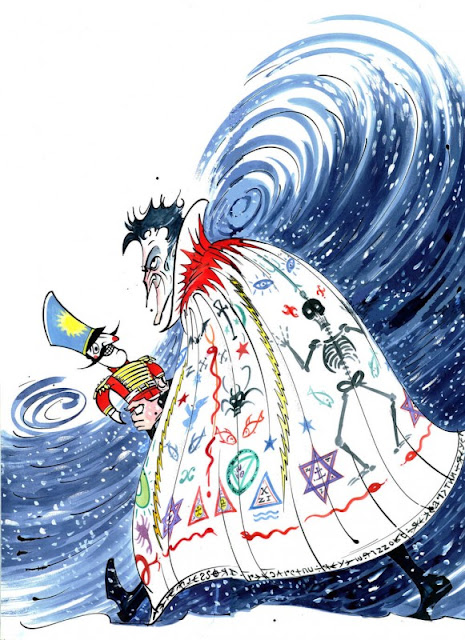 The films of Walt Disney were a vital influence on the young Scarfe – in particular the richly illustrative Pinocchio – so his eventual collaboration with the Disney Studio on Hercules is less surprising than it might seem. The examples of his work for this film reveal something of the inevitable tension between the collision of an animation style built on softness and roundness and an artist who is known for his spikes and angles.

However improbable, the collaboration resulted in a striking film and all the examples of his designs itch and twitch with incipient movement: Cerberus, a trio of red-eyed, slavering heads; the rearing, reptilian-eyed Hydra; the black bulk of the Minotor hurtling headlong down a cliff against a blood-red sky; Pegasus, springing into winged flight and yet another Scarfe interpretation of Hades, this time fringed with hellfire. 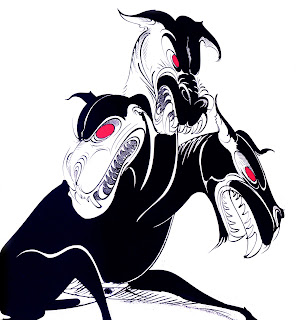 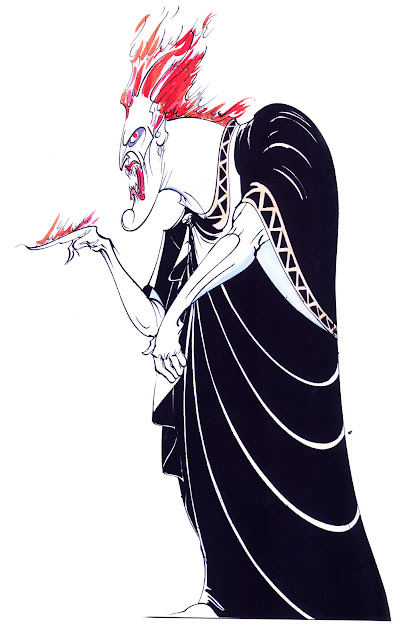 The exhibition also salutes Scarfe's work on a very different animated project Pink Floyd: The Wall – with its powerful imagery and dynamic energy that has haunted our memories for thirty-five years: the menacing 'Schoolteacher' marionette with educational mincing machine, the brick-solid 'Mother', the incendiary 'Ex-Wife', the metallic bird of prey and the goose-stepping hammers. And, of course, the Wall itself... 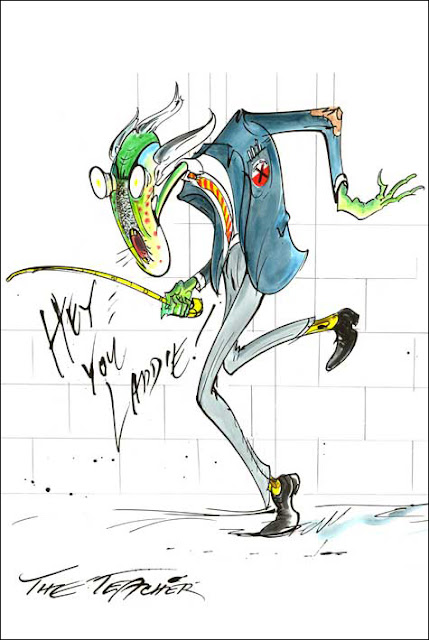 House of Illustration continues to stage exhibitions celebrating the extraordinary breadth and diversity of the illustrator's art; if there are still any Londoners who have yet to discover this unique venue, then this opportunity to savour the art of Gerald Scarfe 'in performance' should provide an irresistible invitation. 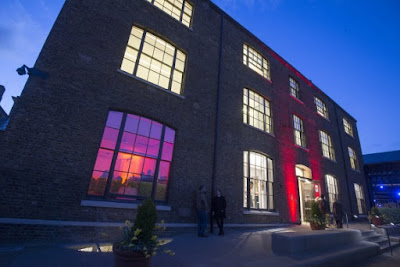 House of Illustration is located at 2 Granary Square, a few minutes' walk from King's Cross station.

For full programme details, admission prices and on-line booking visit House of Illustration. Also check out some of the publications and gifts available from their shop.
Posted by Brian Sibley at 14:28 0 comments