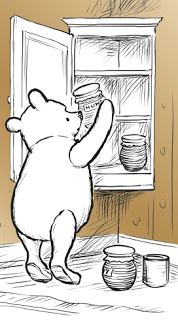 Rabbit was rushing along through the Hundred Acre Wood in a great hurry.


"Can't stop, Pooh," he said as he hurtled by, "I've got to order my copy of next Sunday's Sunday Telegraph."

Pooh was wondering what a 'Next-Sunday's-Sunday-Telegraph' was, when Eeyore wandered by, stopped and looked gloomily at Pooh. "I don't suppose I'll be in it," he said.

"What indeed?" echoed Eeyore and shambled away in search of a thistle with which to console himself.

Pooh went to ask Piglet what he thought and then they both went to ask Owl whether he thought they were right and Owl said it was all to do with something called a 'Sequel' that was Coming Very Soon.

"You see," said Owl, "a sequel is Something That Comes After Something That Went Before and really needs to be the Same but Different, if you see what I mean."

Unfortunately, they didn't, so they went to ask Christopher Robin What it All it Meant.

Two jars of honey and a plate of haycorns later, Christopher Robin explained that because Pooh was about to celebrate being 90, the nice people at Egmont, who looked after his books for him, had invited four writers – Paul Bright, Jeanne Willis, Kate Saunders and Brian Sibley – to tell four new stories about Pooh and his friends and Mark Burgess to make lots of pictures of them all doing the Sequely things that happen in Sequels.

And when Sunday eventually arrived, Rabbit rushed round to Pooh Corner with a copy of The Sunday Telegraph, which had an interview with Brian in the newsy part, and an article by Brian in what was called the 'Living' part along with a thrilling extract from Brian's story that everybody crowded round and read with great interest and excitement: because, as well as Pooh and Piglet and Eeyore and Rabbit and Owl and Everyone Else, there was Somebody New, called–––––––––

But I really you can't tell you any more than that, because if I do, we will find ourselves being pursued by something called an Embargo, which, as Rabbit has reminded me, is a Very Fierce and Potentially Litigious Creature indeed!


And THAT is why, if you really want to know what this is all about (and Pooh says that You Really Do), you will have to buy The Sunday Telegraph this Sunday... 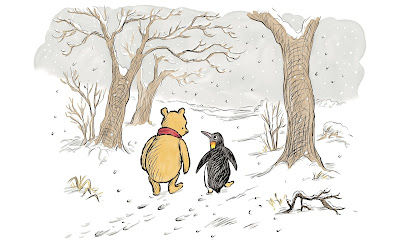 Inspired by this Milne family photograph... 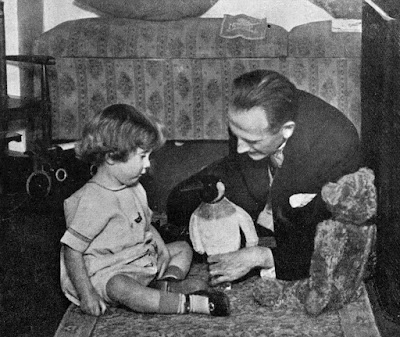