Forty years ago this Sunday, the BBC radio's epic 1981 dramatisation of The Lord of the Rings reached its half-way point with Episode 13, 'The King of the Golden Hall', in which Gandalf, Aragon, Legolas and Gimli arrive at Meduseld and present themselves before King Théoden of the Mark.

Elsewhere in Middle-earth, Frodo, Sam and Gollum struggle on towards Mordor, traversing the dread-filled Dead Marshes, depicted here in Eric Fraser's original art for the accompanying programme-billing in Radio Times.

In 'Treebeard of Fangorn', Episode 12 of the BBC's radio dramatisation of The Lord of the Rings, first broadcast forty years ago this Sunday lunchtime, Merry and Pippin find themselves in the forbidding Forest of Fangorn and encounter Treebeard – stiff-limbed and with bark-like skin and leafy hair – the oldest of the Ents left in Middle-earth and depicted here in the original art for Eric Fraser's original art for the illustration published in the weekly listing's magazine, Radio Times.

In the series, Treebeard was played by Stephen Thorne, a towering, deep-voiced actor with whom I had worked on many occasions – his having previously been the voice of Jesus in some early plays I wrote for Schools Radio and had spoken for Aslan the Lion in my dramatisations of C S Lewis' 'The Chronicles of Narnia' –– which is more or less the same role as playing Jesus! As Treebeard, Stephen performed at the microphone draped in yards of gash recording tape so that he permanently 'rustled' in simulation of the Ent's great leaf-hung arms!

The original art for Eric Fraser's Radio Times illustration to accompany episode 11 of the BBC's audio dramatisation of The Lord of the Rings (first broadcast on this Sunday forty years ago) depicts the slain Boromir laid in his boat upon the waters of the mighty Anduin, the Great River of Wilderland...

However, the episode, entitled 'The Riders of Rohan', reflected the dispersal of the remaining Fellowship, with Frodo and Sam headed for Mordor with the One Ring and Aragorn, Legolas and Gimli's searching for the orc-kidnapped Merry and Pippin, a quest leading to a meeting with Éomer and the Rohirrim.

At mid-day on this Sunday, forty years ago, listeners to episode10 of the BBC radio dramatisation of The Lord of the Rings, witnessed 'The Breaking of the Fellowship'. Eric Fraser's original art for the illustration accompanying that day's programme-billing in Radio Times depicts the 'star-glass' given to Frodo by the Lady Galadriel on the Fellowship's departure from Lothlórien. I particularly admire Fraser's use of black-and-white to indicate the light radiating from the phial... 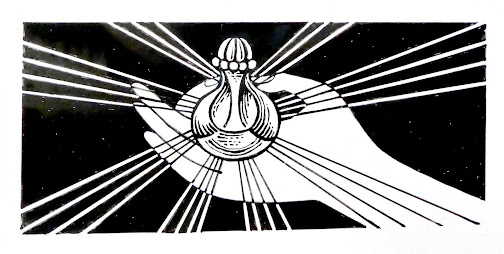 'In this phial,' she said, 'is caught the light of Eärendil's star, set amid the waters of my fountain. It will shine still brighter when night is about you. May it be a light to you in dark places, when all other lights go out.'
Posted by Brian Sibley at 00:00 0 comments

It was forty years ago, on this Sunday, that BBC Radio 4 broadcast the ninth episode of its 26-part dramatisation of The Lord of the Rings: 'The Mirror of Galadriel', with Frodo and his companions finding solace, after the loss of Gandalf, in the Elven tree-house-city, Lothlórien.

Eric Fraser's original art for the illustration accompanying this episode's billing in Radio Times shows the Lady Galadriel's oracular water-mirror into which Frodo looks and sees possible glimpses of future times and events.