Farewell to Alan Young (1919-2016) that engaging actor whose many roles on stage, film and television include Wilbur Post, the klutzy owner of a loquacious Palomino horse in one of the wackiest of the goofy '60s TV sitcoms Mister Ed (1961-66) and, later, the voice of Disney's Scrooge McDuck in Mickey's Christmas Carol and numerous TV animations.

Anyone thesp who can share the screen with a talking horse without being totally upstaged and can speak like a stingy Scottish duck is, surely, an actor with genuine talent! 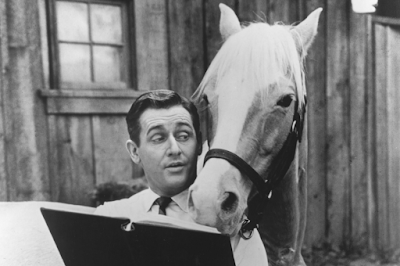 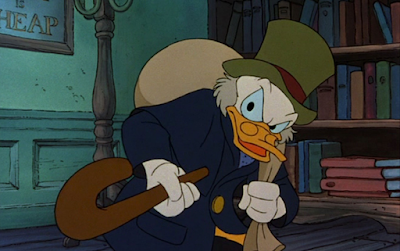 What better day to celebrate my blog's TENTH BIRTHDAY?

It is true that recently I have been somewhat seduced away from blogging by that coy mistress, Facebook, but I still enjoy coming back here, once in a while, where so many weird and wonderful, delightful and dubious things have been celebrated and where, over the years, so many friendships have been made!

Today would have been the 100th birthday of a very special lady who, for several years, I called a friend... 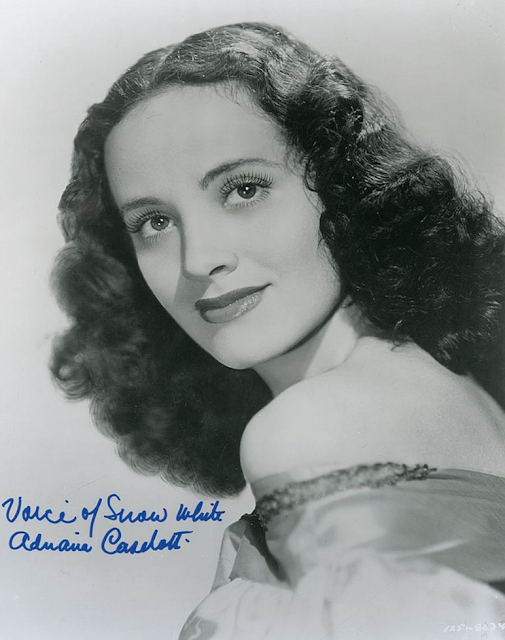 Her name was Adriana Caselotti (1916-1997) and although it never appeared on the film's credits, she was the speaking and singing voice for Snow White in Walt Disney's classic, Snow White and the Seven Dwarfs. 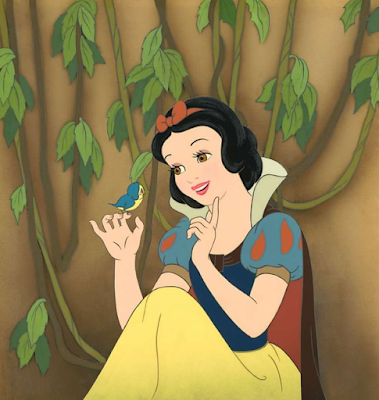 Rather than retell Adriana's extraordinary story, I am going to let you hear it from the lady herself in an archive recording of a  long-distance, virtual-interview which I conducted in June 1987 while researching for the book Snow White and the Seven Dwarfs: The Making of the Classic Film which I wrote in collaboration with Richard Holliss to mark Miss White's 50th birthday.

I mailed my questions to Adriana and she answered them onto tape. The quality isn't great: it was recorded in a very echoey acoustic and there are one or two amusing stops and starts (and a few inaccurate answers!) but it gives a good idea of what a fascinating person she was.

As you will quickly deduce, she was something of an eccentric, but she was – once you became acclimatised to the near-exhausting enthusiasm – an utterly charming and adorable person. I loved her dearly...

Anyway, here's Snow White's adventures as she herself recounted them, aged 71...


Alas, she never did visit England, but I visited Los Angeles and got to meet her in person at her extraordinary Polynesian style home (with an anachronistic wishing well and a Japanese bridge in the garden!). I knew I was in for an experience when she answered the door-phone as Snow White telling Grumpy: 'Brian's at the door!' and singing 'I'm Wishing'! 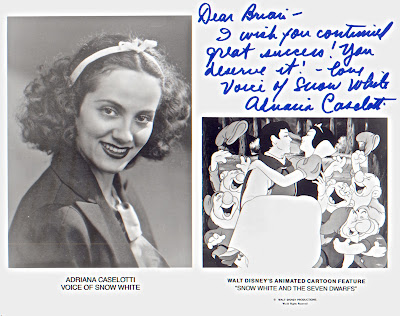 On the subject of singing, here's another unique recording for you: the seventy-year-old Adriana singing six karaoke numbers that she recorded in November 1986: 'Bésame Mucho', 'Strangers in the Night', 'Harbor Lights', 'Autumn Leaves', Beyond the Reef' (both vocals!) and 'I Left My Heart in San Francisco'. This recording concludes with 'I'm Wishing', from Snow White, recorded (as she explained in the interview above) for the Fantasyland Wishing Well in Disneyland in 1983, when she was age sixty-seven...


I corresponded with Adriana up until the end of her life and made a number of memorable visits to see her, by myself or with dear friends – on various occasions, Richard and Chris, Muir, Michael and Malcolm – all of whom shared my affection for this wonderful character... 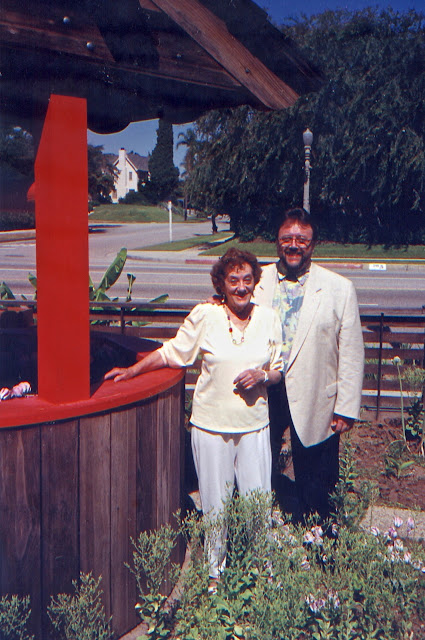 Every visit was commemorated with some keepsake of our friendship... 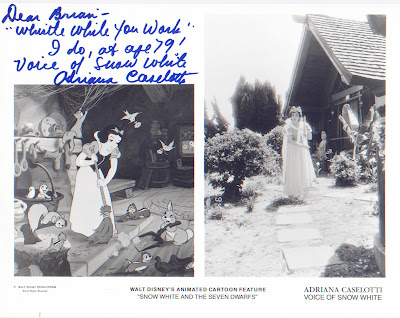 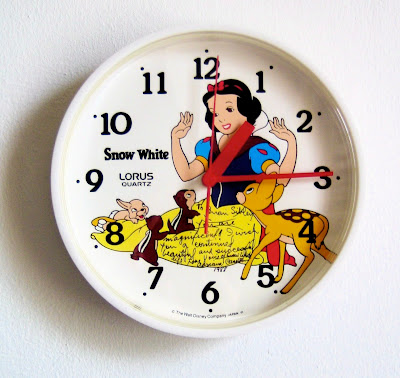 Finally, here's The Fairest of Them All – a vintage BBC radio feature marking Snow White's 50th anniversary that I wrote and presented on the BBC World Service programme strand, Meridian on 8 December 1987...

And if you're not snowed-up by now, you can read the story of the making of this iconic film on today's post over on my sister blog, Decidedly Disney.
Posted by Brian Sibley at 10:00 3 comments