Who is that svelte young man lounging outside 'The Rovers Return' on Coronation Street?

This delightful relic from the past was excavated by my good friend and colleague, Malcolm Prince, with whom, back in 1998, I made the pilgrimage to Weatherfield as part of a radio series we were making for BBC World Service on the history of the soap-opera, entitled, To Be Continued...
Obviously, in the succeeding years, I have consumed rather too many of Betty's hotpots! 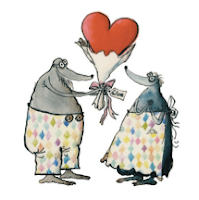 It's funny how often happy things emerge out of adversity. A recently-reveled instance of this is Les Très Riches Heures de Mrs Mole, a set of forty-seven drawings by the world's greatest living cartoonist, Ronald Searle, published by Artist's Choice Editions and currently being exhibited at The Cartoon Museum in London.

The title parodies that of the famous 15th century French illuminated prayer book, Très Riches Heures du Duc de Berry, 'The Very Rich Hours of the Duke of Berry' (right) featuring exquisitely painted and incredibly detailed scenes of daily life in the Duke's court and in the fields around his castle worked by the peasants.

Searle's pictures tell the story of the domestic chores and recreations of the delightful Mrs Mole, busying herself in and around her house in Provence: gathering flowers and herbs, sewing a patchwork quilt, making mince pies, swimming, playing badminton, dancing in the snow, walking through autumn leaves. 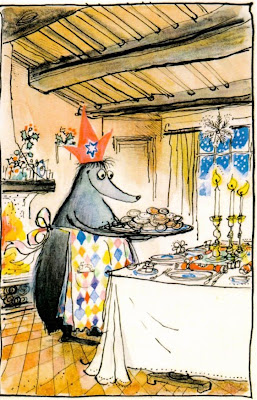 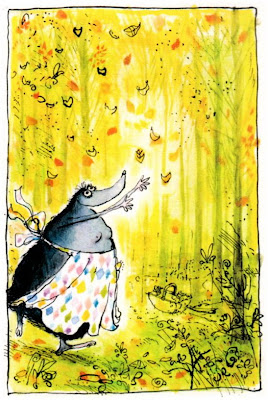 Forty-two years ago, in 1969, Ronald Searle's wife, Monica (or Mo) was diagnosed with breast cancer. With a doomful prognosis of only a few months to live, she embarked on a course of, what was at the time, experimental chemotherapy treatment.

The distraught Ronald, not knowing any other way to support Monica through her ordeal, began creating drawings of his wife in the persona of the calm and contented Mrs Mole pottering around in her in diamond-patterned harlequin apron. "I have only my talent for drawing," he later said, "So, I drew."

The inspiration of the mole as a character had come about when Ronald and Monica were renovating their house in a Provencal village and came across a particularly stubborn rock in the floor which, on excavation, turned out to be the keystone to an arch in a subterranean level of the building of which they were previously unaware. This started them imagining the goings on of a possible mole community beneath their floors.

Devotees of Searle's legendary penmanship will relish the artist's use of colour, his depictions of summer sunlight and winter snowscapes and his knack of combining the immediacy of the sketch with the inclusion of precise, minutely observed detail. 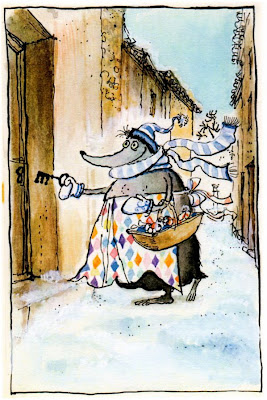 For Monica, the drawings brought her comfort and encouragement over the six years she underwent treatment in Paris: "I would lie in bed," she has said, "living the life he created in the pictures."

Although on each hospital visit, her specialist would make a point of asking to see Ronald's latest drawing of Mrs Mole, these highly personal drawings were never intended for publication. 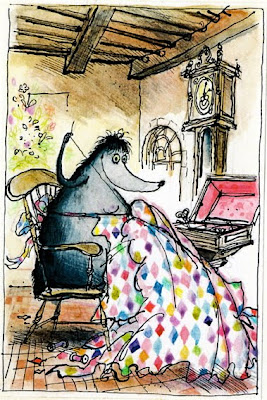 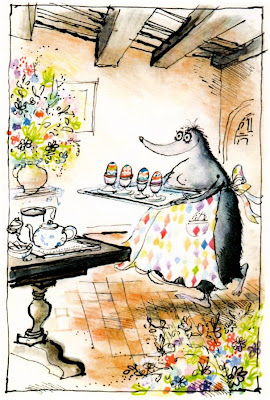 That the Searles have now decided that they may be shared with the world reflects the fact that whilst a cancer diagnosis today is, fortunately, not necessarily a death sentence, cancer research has still a long way to go. The sale of prints of these delightfully witty drawings will raise money for the charity Macmillan Cancer Support as well as The Foundling Museum and the Cartoon Museum.

They are also a reminder that the will to survive can be infinitely encouraged by a little love and a lot of hope. 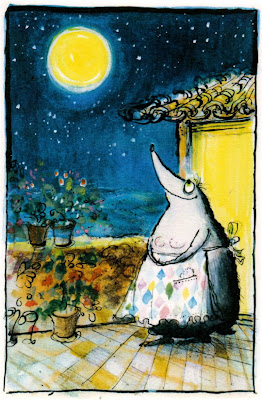 The exhibition continues at The Cartoon Museum only until 20 March, so if you're anywhere near the capital, make sure you don't miss it!

Copies of Les Très Riches Heures de Mrs Mole (signed by Ronald and Monica Searle) and prints of the individual drawings (similarly signed) can be ordered from the Museum or from Carol Manheim of Artist's Choice Editions, art.photo@lineone.net, 0208 994 9740. 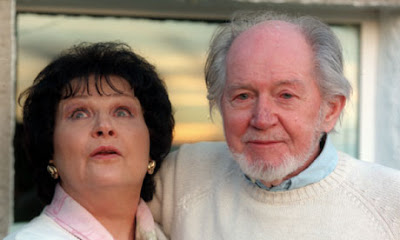 *
You'll find more on Mrs Mole (and much, much more on Mr Searle) on Matt Jones' Ronald Searle Tribute blog.

Images: Illustrations of Mrs Mole and photograph © Ronald Searle 2011, courtesy of the artist and the Sayle Literary Agency.
Posted by Brian Sibley at 15:30 4 comments

To mark the day held dear by lovers and blessed by St Valentine, here are some couples whom we have encountered (through the camera lens) while in Venice...

Today is a day to share love:
so, to everyone,
whether you have (or haven't) a lover,
whether you are in (or out) of love;
and especially to
my very own
Valentine...

You can view more of our Venice photographs on my flickr Photostream
Posted by Brian Sibley at 00:01 4 comments 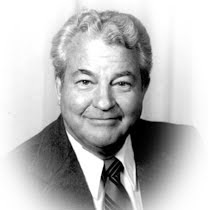 I am marking the passing of another Disney legend: animator Bill Justice, who died yesterday, one day after his 97th birthday.
As I noted in my obituary for The Guardian, it was in 1937, while America was in the throes of the Great Depression, that aspiring portrait painter, William Justice responded to a press advertisement and applied to the Disney studio for a job. The salary was $12 a week and it was for a 30-day try out. When he eventually retired, in 1979, he had been working at the studio for 42 years!

Bill, who never lost his ebullient enthusiasm for his work, contributed to many of the studio's most famous feature films, including Bambi, as well as many short cartoons, among them, most of those featuring that Donald Duck-baiting duo, Chip 'n' Dale, and the experimental stop-frame animated film Noah's Ark, which received an Academy Award nomination.

Bill also worked on the Disney TV show, The Mickey Mouse Club (he directed the opening credits), created the special effects for the 'Spoonful of Sugar' sequence in the multi-Oscar-winning Mary Poppins and was responsible for numerous design-projects for attractions at the Disneyland.

Here are few of his career highlights... 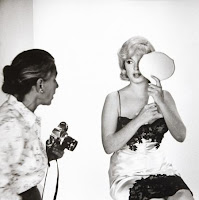 Eve Arnold is one of the legendary names in 20th century photojournalism, responsible for many photographic masterpieces – especially her pictures of that most most iconic of icons, Marilyn Monroe.

In 1951, at the invitation of Robert Capa, Arnold joined the famous cooperative, Magnum Photos, travelling the world capturing the celebrities and, just as memorably, the ordinary people of several continents.

A major exhibition of Eve Arnold's work, in both black and white and colour, has just opened as the inaugural show at Chris Beetles Fine Photography, 3-5 Swallow Street, London, W1B 4D, where it continues until 5 March 2011.

There are many striking images on show and for sale, including candid shots of Clark Gable and Monroe during the filming of The Misfits (along with 'Mr Monroe', Arthur Miller) and revealing portraits of Terrence Stamp, Michael Caine, Paul Newman and Andy Warhol.

Here, however, to entice you to take a closer look at the world through the eye and lens of Eve Arnold, are a few of her remarkable studies of women - famous and anonymous – that demonstrate her consummate skill behind the camera...

A girl who shares a bath and flat with three other girls, London, 1961

Josephine Baker returns to New York after a 25-year absence, 1950

Bar-girl in a brothel in the red-light district, Havana, Cuba, 1954

Marilyn Monroe during the filming of The Misfits, Nevada, 1960

Another EAT ME invitation from Wonderland...

Lover of puns though Lewis Carroll was, I doubt that his alter ego, the Reverend C L Dodgson, would have have been too amused by another punning product from the same manufacturer – even if the contents are the perfect solution to over-indulging in EAT MEs!

Many tributes have been paid in the media to the incomparable legacy of film music left by John Barry who died on Sunday.

Just about everyone knows and can hum at least three or four of Barry's themes (whether its one of those early James Bond songs or the themes to Born Free, Dances with Wolves or Out of Africa), but here are two of my personal favourites from his scores: the Academy Award-winning music for one of the seminal movies of my teenage cinema-going: the 1968 film, The Lion in Winter starring Peter O'Toole and Katherine Hepburn...

And the elegiac theme composed for one of my all-time best-loved pictures: the 1980 Christopher Reeve/Jane Seymour weepy, Somewhere in Time...

If you are a fan of John Barry's music, you might like participate in what is hoped will be a unique British tribute to one of our truly great popular composers. The idea, suggested by a group of his friends and admirers, is to get enough copies of Louis Armstrong's version of Barry's 'We Have All The Time In The World' bought to make it No. 1 on the UK chart.

It's important that a specific Armstrong track is singled out, and the one people are being urged to buy is from On Her Majesty's Secret Service (Soundtrack from the Motion Picture) Remastered. Here's the link.

There's a Facebook group dedicated to achieving this aim and you can find details here.