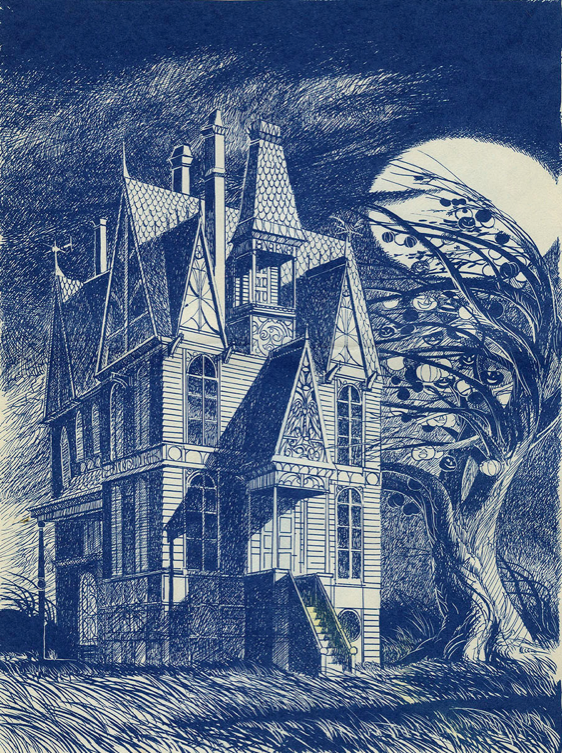 The town was full of trees. And dry grass and dead flowers now that autumn was here. And full of fences to walk on and sidewalks to skate on and a large ravine to tumble in and yell across. And the town was full of...

And it was the afternoon of Halloween.

And all the houses shut against a cool wind.

And the town was full of cold sunlight.

But suddenly, the day was gone.

Night came out from under each tree and spread.

– The Halloween Tree by Ray Bradbury

Although I shan't be Trick-or-Treating tomorrow night, I thought I'd introduce you to a few old friends who would be experts at the game –– a bunch of delightfully demonic beings that snuck into my luggage during a holiday in Portugal some years ago.

Contrary to his sinister appearances, the red devil on the right also serves as a rather jolly little whistle!! 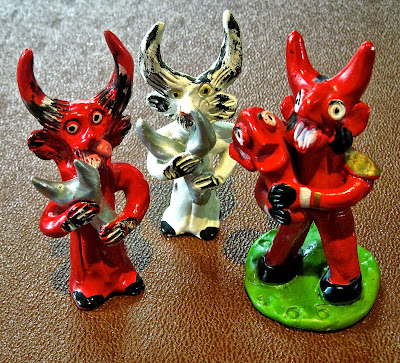 A few years ago, I wrote a documentary series for BBC Radio 2 on THE MUSICAL, which gave me the opportunity to interview an impressive role-call of composers, lyricists and performers, among them John Barrowman, Maria Friedman, Sandy Wilson, Victor Spinetti, Ruthie Henshall, Don Black, Tim Rice, Elaine Paige, Richard Stilgoe, Michael Grandage and Bobby Lopez. In addition, each programme was presented by a leading star of musical theatre...

The series gets a new airing on BBC Radio 2 tomorrow evening (Tuesday 28 October) at 11:00 pm, when Sian Phillips presents 'Stories with Songs'... A CAR FOR ALL SEASONS

1968: the Odeon, Bromley, and I'm sitting eagerly in the circle waiting for the main film to begin –– for the third time that week! Having seen Chitty Chitty Bang Bang once, I'd no choice but to see it again – and again! 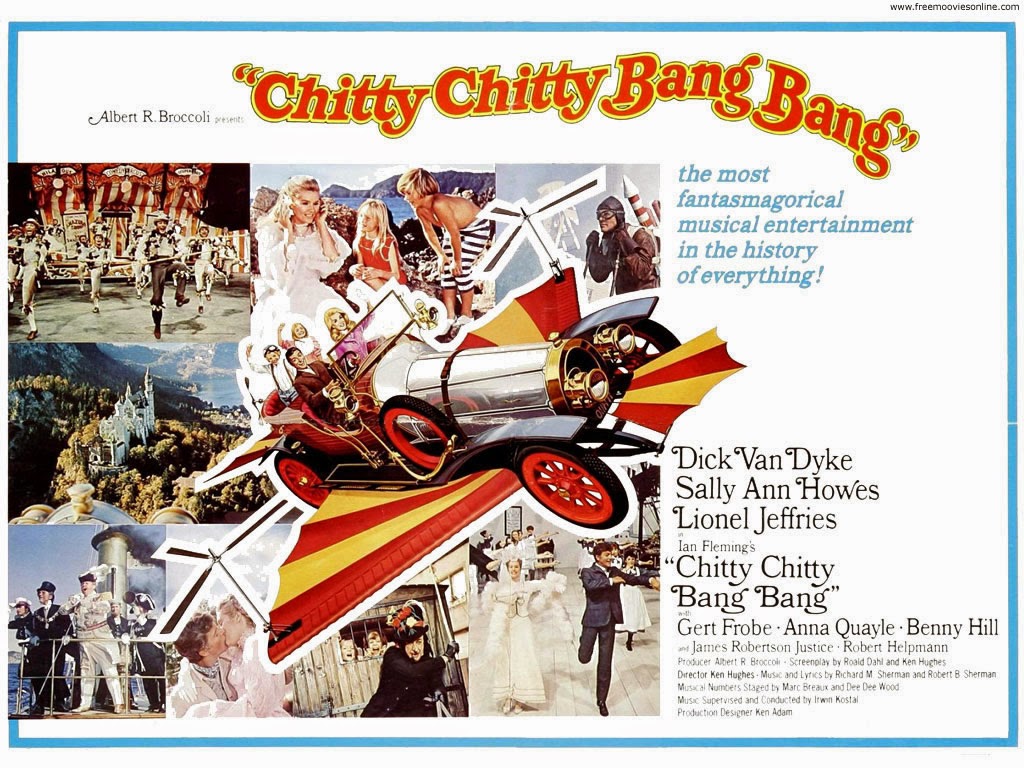 I was very far from being car-mad kid (apart from a small collection of vintage Corgi vehicles) and I eventually grew into a non-driver who gave up all attempts to learn to learn the necessary skills when I drove my Dad's car over a revolving sign in a petrol station, during a practice run, and did terrible damage to the gubbins underneath...

However, with Chitty Chitty Bang Bang, the 'fantasmagorical flying machine', it was love at first sight! And second... and third... 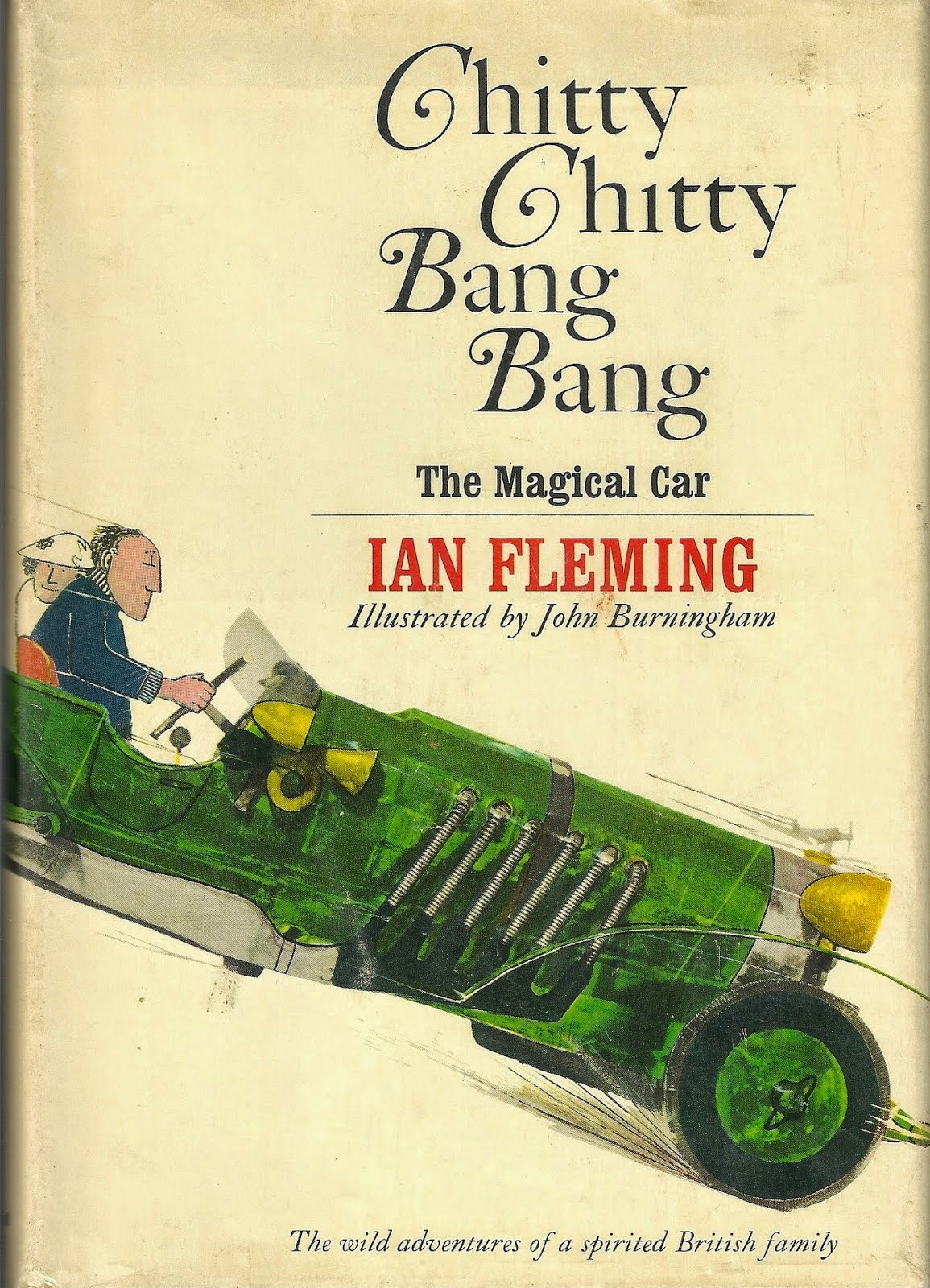 At the time, I not read the original book by Ian Fleming (published four years earlier in 1964), but, of course, I knew Fleming as the creator of the James Bond, and I had read books by the film's screenwriter, Roald Dahl.

But the real excitement about the movie was that it was the next best thing to getting a new film from my favourite fantasy filmmakers at the Disney studio. In fact, it actually felt like a Disney film – especially since it featured so many of the talented folk who, four years earlier, had given us Mary Poppins...

Only later did I discover that producer, Albert 'Cubby' Broccoli – who, after the success of Poppins was anxious to enlist the talents of the Oscar-winning song-writing team of Richard and Robert Sherman – had approached Walt Disney, and invited him to co-produce the film.

Walt declined, but generously released the Sherman Brothers from their exclusive contract with him while they worked on Chitty. Broccoli signed Dick Van Dyke to play Caractacus Potts, unsuccessfully tried to get Julie Andrews for Truly Scrumptious (settling, instead, for Sally Anne Howes who had followed Julie in the role of Eliza Dolittle in the Broadway run of My Fair Lady) and secured the talents of Poppins choreographers, Marc Breaux and Dee Dee Woods as well as Poppins orchestrator and conductor, Irwin Kostal.

The resultant was a charming confection, featuring Disneyesque whimsicality with a decidedly British twist represented by the genius production designer, Ken Adam (Night of the Demon, Dr Strangelove and, of course, the Bond movies) and cartoonist and mad-cap inventor, Rowland Emett, who designed Caractacus' crazy contraptions)...

Then there was that trio of Bond-folk: Gert Frobe (former Goldfinger) as Baron Bomburst, Anna Quayle (Frau Hoffner in Casino Royale) as his Baroness and Desmond Llewelyn (Q) as Mr Coggins the farmer from whom the wrecked Chitty Chitty Bang Bang is purchased.

And... and... and... the shockingly scary Robert Helpmann – one of the 20th century's greatest ballet dancers and choreographers – as the unforgettably sinister Child Catcher...

The film is full of weird moments of dark, Roald Dahl-concocted comedy, counterpointed by a wistful charm and one of the Sherman Brothers' finest scores: from the rambunctious title song to the haunting lullaby, 'Hushabye Mountain'...

All this is but a prelude to a plug for my forthcoming radio feature... 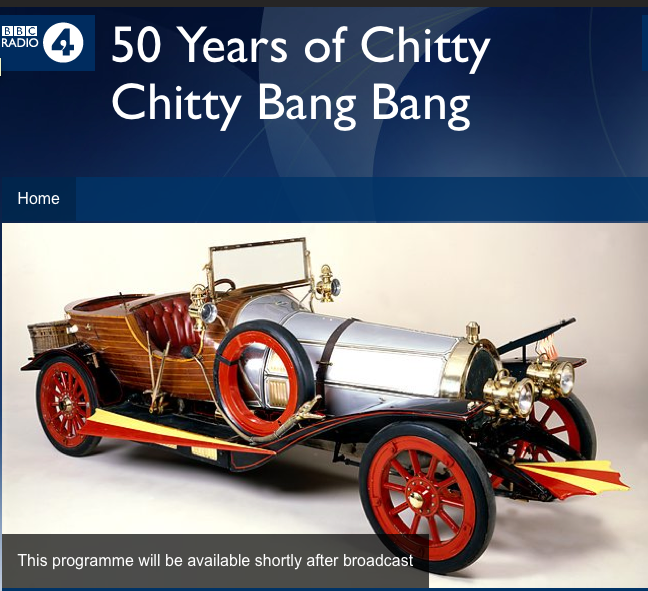 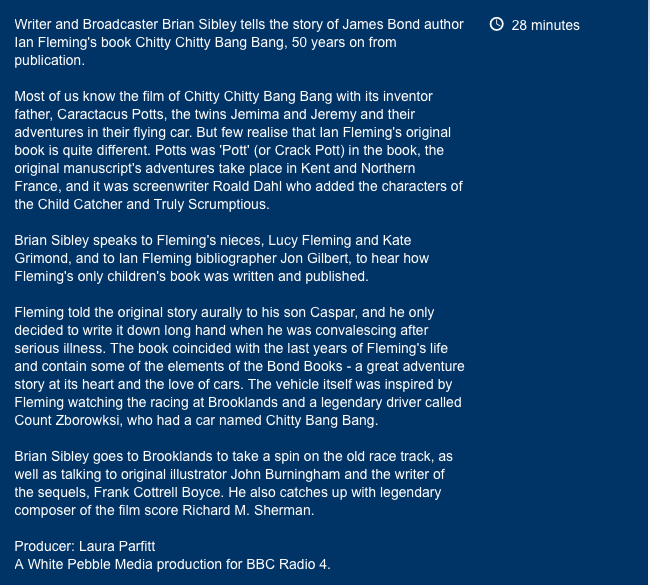 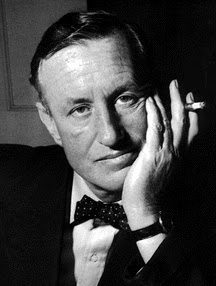 The programme mentions the film (inevitably) but it is mostly a celebration of Ian Fleming's original book and tell the story of the exotic Count Louis Zborowski, who built and drove the famous original racing car 'Chitty Bang Ban'g (note: just the one 'Chitty') and how it inspired Fleming's imagination when he later came to tell bedtime stories to his son, Casper; and, later still wrote them down while recovering from a heart attack.

It's a story of happy memories and sad associations and I am joined in telling it by Fleming's nieces, Lucy Fleming and Kate Grimmond; bibliographer, Jon Gilbert; Alan Winn, Director of Brooklands Museum (where I got to ride in a vintage Bentley); children's writer (and Chitty sequel author) Frank Cottrell Boyce and my old friend, the legendary song-smith, Richard M Sherman – along with an archive snippet from a vintage Sibley interview with Roald Dahl – and a visit to artist, John Burningham who illustrated the original book... 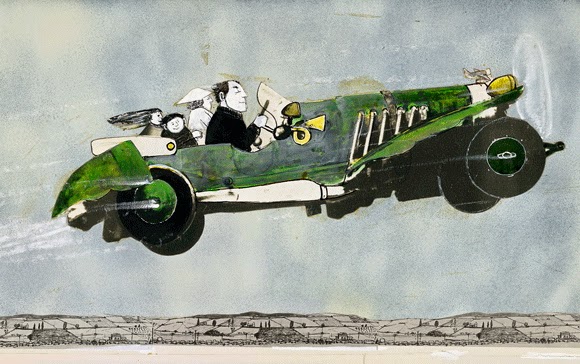 The programme has been broadcast, but remains available to listen again on BBC iPlayer: CLICK HERE

THAT SORT OF BEAR!

Today happens to be 88th birthday of a certain Edward Bear, better known as 'Winnie-the-Pooh' –– or 'Pooh' for short.

To mark this auspoohcious occasion, here's Pooh creator, A A Milne, reading from the adventures of his famous 'Bear of Very Little Brain'...