ON THE FIRST DAY OF CHRISTMAS

As the BBC no longer repeats what was – for many years – a staple item in its Radio 4 Christmas schedule, I feel free to pass on this little Sibley Christmas gift to you all–––

First broadcast on BBC Radio 4 at Christmas 1977, it stars the incomparable Miss Penelope Keith (with a belated appearance by Mr Timothy Bateson) in...


And Yet Another Partridge in a Pear Tree:
A Cautionary Tale for Christmas Showing that it is Better to Give than to Receive

HAPPY BOXING DAY!
(or, as it's called where we are,
"Il giorno di Santo Stefano"
or
"St Stephen's Day")
Posted by Brian Sibley at 00:00 4 comments 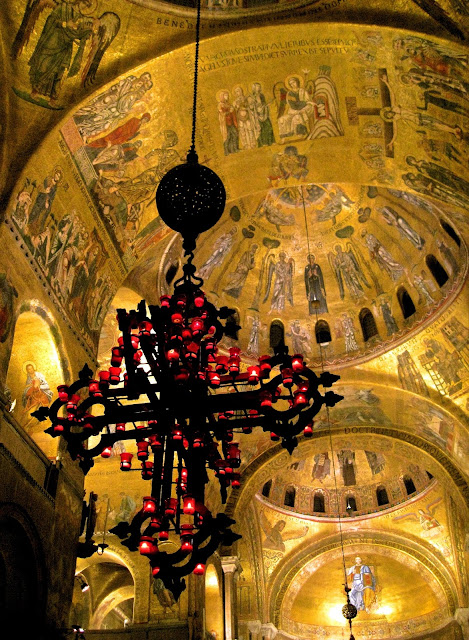 From the creator of Mary Poppins, P L Travers, a mystical story about that first Christmas and a surprising gift brought to the manger by an unlikely gift-giver.

The Fox and the Manger, which I dramatised for radio in 1990, stars Dame Wendy Hiller and Alec McCowen with Richard Pearce and Cast... 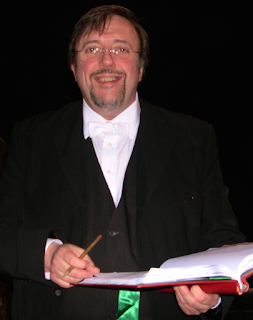 I, as you all must know by now, love (correction – am obsessed by) Charles Dickens' A Christmas Carol.

Each of the story's five 'Staves' has its wonderful evocative scenes – the haunting of Jacob Marley, the bittersweet memories of Christmas Past, the glorious peregrinations of Christmas Present (especially the Cratchit family's humble Christmas dinner) and the terrifying shadows of Christmas Future, but I am particularly fond of the last section in which Scrooge the miser is 'born again'. Dickens called this section – the denouement of his fable – "The End of It".

Here is that conclusion as presented on stage in 2003 by The Lansbury Players in my  adaptation. You will hear Richard Holliss as Ebenezer Scrooge; Cody Barthram as the Boy on Christmas Morning and John Wain as the Poulterer; Chris Holliss and Di Barber as the Charity Collectors; Noel O'Callaghan as Nephew Fred and Joyce Gambles as his wife, Rose; Keith Cummings as Bob Cratchit and Yours Truly as Mr Charles Dickens with the ensemble cast. The songs and original music were by Nick Clark and the production directed by Dave Millard.

So here it is –– the blissful transition from despair to hope of which the true spirit of Christmas speaks to us still...

A DICKENS OF A TALE!

"On", as Mr Dickens puts it, "of all the good days in the year – Christmas Eve": here is the story of how the world's best-loved Christmas book came to be written and what happened to it afterwards...

HUMBUG! was first broadcast 1993, this is a revised & extended version of a programme originally broadcast in 1987. Told by me (in those far off days when I was still a BBC voice) it features Norman Bird, Diana Olson and more Scrooges and Marleys than you can rattle a chain at!

It's very nearly Christmas, so here's a little entertainment I created (back in 1983) reflecting – not too irreverently, I hope – on the very first Christmas...

A Birthday at Bethlehem stars the brilliant Dame Thora Hird and Peter Goodwright with Peter Bartlett and Tarleton's Jig...

A seasonal conversation between me and the late, great Terry Pratchett about his Discworld and its mythic gift-giver, Hogfather, and what happens when that character gets kidnapped...

This encounter was first broadcast on 'Meridian', BBC World Service, on 30 December 1996 and the reader is the great Stephen Thorne (know to aficionados of Sibley dramatisations as both Aslan and Treebeard).

I hope it provides a seasonal Ho-ho or two...

CHRISTMAS IS COMING AND THE GEESE ARE GETTING...

My absurdly-talented chum: artist and mosaicist, Martin Cheek, appears to have been channeling M C Escher with this latest mosaic masterpiece...

A gaggle of seasonal geese appear to be making a bid for freedom stage left, while one silly goose insists on heading in the wrong direction–––

Or is he, perhaps, the only one who knows which way doesn't lead to the chopping-block?

In any event, this witty composition is a total delight! 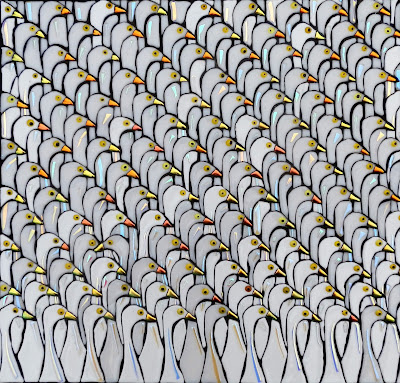 And  you can find out about his latest book HERE!
Posted by Brian Sibley at 18:48 0 comments

Here's a little audio Christmas decoration for your tree as you set about wrapping your presents... It comes with love from myself and the great O Henry.

From the BBC Schools Programme, 'Contact', sometime in the early 1980s.

Hit the Heights: A Radio Revue For Christmas

I created this show as part of a BBC Radio 4 season devoted to the theatrical entertainments of the 1920s. Compiled from contemporary revues, it features the original ((often unexpurgated, pre-Lord-Camberlain's-blue-pencilled)) scripts along with songs by Cole Porter, Ivor Novello, George Gershwin, Rogers & Hart and Noel Coward.

The Musical Direction is by Mr Richard Holmes and the show was produced and directed by the late Mr Glyn Dearman. It was first broadcast on BBC Radio 4 in December 1990.

[N.B.: I was not responsible for the opening and closing 'conceit' that ran across the whole season]

This is my very first radio dramatisation (1981) and my sole calling-card when I brashly proposed to the BBC the idea of dramatising The Lord of the Rings!

Yes, it is old – and, perhaps, a little worn – but I hope it still has at least a touch of wonder...

An early seasonal offering from a Sibley-Christmas-Past courtesy of Lucy M Boston, Patricia Routledge and me!

Join Tolly on his adventurous visit to Green Knowe...

[With music specially composed by the Fratelli Brothers, the play was directed by Marilyn Imrie and first broadcast on BBC Radio 4 on Saturday 18 December 1999]

AS IF IT WERE YESTERDAY... 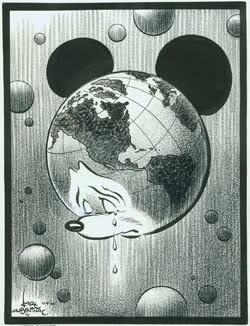 The event I am recalling happened fifty-one years ago today...

I am getting ready for school and, suddenly, my father is calling up the stairs: "Brian, Walt Disney has died..."

Downstairs, I heard the murmuring drone of radio voices as my father – busy brewing early-morning tea – listens, as he does every day, to the BBC’s morning news programme.

I ought, perhaps, to have dashed downstairs to listen to the reports, absorb the details, gather up the tributes. After all, Walt Disney was my hero. A strange idol for a teenage lad, maybe – but that is what he was.

I collected every book, magazine and trivial snippet that I could find about Disney and his studio. I was forever copying pictures of Disney characters in my sketchbooks – in fact my youthful ambition was to be a Disney artist, to animate those fabulous beings that appeared in his films. I longed to be a part of that mystical process that created characters out of ink and paint and then imbued them with a power to move people to laughter or tears; I was obsessed by the man and his movies. 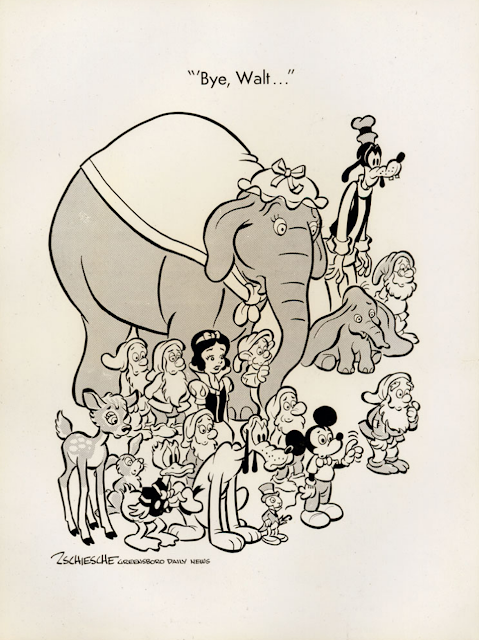 Later that morning, on my way to school, I would buy the daily newspapers and – in a corner of the playground at morning break – pore over the obituaries; but, at the moment of first hearing the news, I had only one response: I sat on the edge of my bed and wept. 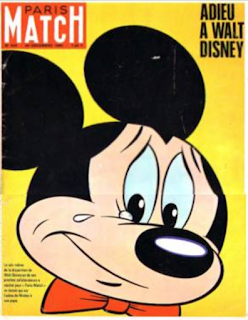 For the first time in my young life I experienced that bizarre phenomenon: a feeling of overwhelming grief at the death of someone whom I did not know. Not only had I never met Walt Disney, I had – rather surprisingly – never even written him a fan letter. Yet, I had been bereaved of someone who held a truly unique place in my affections and the loss felt achingly huge.

During the fifty years since that day, I have continued to study and, occasionally, write about the life and work of Walt Disney and, in the process, had the privilege of meeting many of those who knew, loved and (occasionally) loathed the man.

Now, once again, I am working on a book about Disney and am realising that I am passing on a torch to those who will come after who will not have the familiarity of having lived when Disney was still known throughout the world as a flesh-and-blood person as opposed to just a corporate name represented by a copyrighted signature.

That knowledge, as much as anything else, is what fires my enthusiasm, because, whilst my experiences and encounters have brought me very close to feeling that I understand much about the personality and character of Walter Elias Disney, I have never been – and never will be – as close to him as I was on that morning when my father called upstairs to tell me the news that Walt Disney had died.

A version of this post was first published in 2016.
Posted by Brian Sibley at 17:58 0 comments 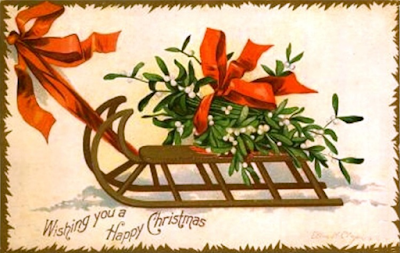 As the Christmas cards daily tumble through the letter box with their vast diversity of designs, I am reminded of this delightful poem by Ogden Nash in praise of the cards of Christmas Past...

When I was but a boy,
'Twas my once-a yearly joy
To arise of a Yuletide morning,
And eagerly behold
The crimson and the gold
Of the messages the mantelpiece adoring.
There were angels, there were squires,
There were steeples, there were spires,
There were villagers, and mistletoe and holly,
There were cosy English inns
With the snow around their chins,
And I innocently thought them rather jolly.
I blush for me, but by your leave,
I'm afraid that I am still naïve.

Oh, give me an old-fashioned Christmas card,
With mistletoe galore and holly by the yard,
With galumptious green and gorgeous scarlets,
With crackling logs and apple-cheeked varlets,
With horses prancing down a frosty road,
And a stagecoach laden with a festive loan,
And the light from the wayside windows streaming,
And a white moon rising and one star gleaming.

Departed is the time
Of Christmases sublime;
My soprano is now mezzo-basso;
And the mantelpiece contains
The angular remains
Of a late representative Picasso.
There are circles, there are dots,
There are corners, there are spots,
There are modernistic snapshots of the city;
Or, when the artist lags,
They are livened up with gags,
You must choose between the arty and the witty.
I blush for me, but I must say
I wish you'd take them all away.

Oh, give me an old-fashioned Christmas card,
With hostlers hostling in an old inn yard,
With church bells chiming their silver notes,
And jolly red squires in their jolly red coats,
And a good fat goose by the fire that dangles,
And a few more angels and few less angles.
Turn backward, Time, to please this bard,
And give me an old-fashioned Christmas card. 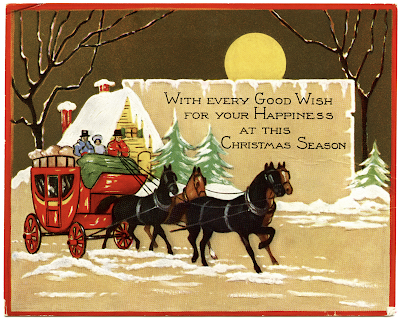