Episode 17 of the 1981 BBC radio dramatisation of The Lord of the Rings was broadcast forty years ago on this day. In 'The Window on the West' Frodo and Sam meet Faramir and are taken to Henneth Annûn, the secret Gondorian outpost in North Ithilien, hidden in a cave behind the protecting veil of a great west-facing waterfall. Artist Eric Fraser featured this location in this original piece of art created for Radio Times; however, it never appeared in print.

As with the last two week's illustrations, an industrial dispute at the Radio Times printing-works forced the magazine to edit this  issue to an 'emergency' issue with fewer illustrations and limited programme details. This is was the last week in which the magazine was impacted by the dispute and this is the third and final hitherto unseen Fraser illustrations to be belatedly published here.

Forty years ago, on this Sunday, the 1981 BBC radio dramatisation of The Lord of the Rings arrived at its 16th episode, entitled 'The Black Gate is Closed'. Veteran illustrator,  Eric Fraser created this original piece of art for Radio Times inspired by the events described in the second chapter of The Two Towers 'Of Herbs and Stewed Rabbit' and featuring Sam Gamgee's culinary skills!

However, Fraser's drawing went unpublished as a result of an industrial dispute at the printing works where Radio Times was produced, the magazine was scaled down to a slim-line 'emergency' issue with heavily edited programme details and few if any illustrations. This is the second of three previously unseen Fraser illustrations now published for the first time on this blog.

Long before David and I were legally 'married', before even we we able to become 'Civil Partners', we had to decide what date to fix as our 'anniversary'. As gays, the choice was not, I'm afraid, noted for its subtlety!
After a few months of celibate dating – I had decided the time had come to move things along! Living at home with my parents precluded that option as a venue, and I ruled out David's flat as it was still very much the home that he had shared with his late partner and I wanted 'neutral territory'.
In those days, back in 1990, I was still gainfully employed as One of the Voices of the BBC, and was earning a quite healthy living –– oh, if only I'd known then how transient success could be! –– so I simply booked a room at The Savoy Hotel (Room # 234, costing, I note, £180 a night) and invited David to dinner at The Savoy Grill with the instruction (again, scarcely subtle!): "Bring a toothbrush!"
After a long evening and a short night, David had to rush off to his teaching job in South East London –– but not before giving me a wonderful present: the key to the door of his London flat. I lingered over my Savoy breakfast contemplating the fact that my life had dramatically turned a corner...
That was thirty-one years ago, today, and... well... d'you know what...? I think it was, without question, the best £180 I ever spent!
With anniversary love to my now Husband.
Here we are together as photographed, in 2019, by Tobias Eckrich. 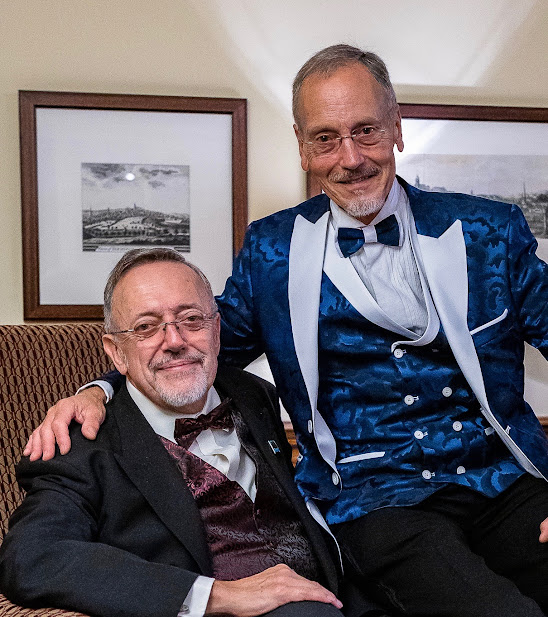 This Sunday, forty years ago, the BBC radio broadcast The Lord of the Rings, Episode 15: 'The Voice of Saruman', showcasing actor Peter Howell as the silver-tongued necromancer. Eric Fraser created this original piece of art for Radio Times featuring Isengard and the Tower of Orthanc, but it was never published.

Due to an industrial dispute at the printing works where the magazine was produced, Radio Times was reduced to a slimmed-down 'emergency' issue with heavily edited programme details and fewer illustrations. This is the first of three previously unseen Fraser illustrations belatedly published on this blog.

This Sunday, forty years ago, the BBC radio dramatisation of The Lord of the Rings began its second half-way point with Episode 14, 'Helm's Deep', centered on the great battle fought on the walls of the ancient stronghold, depicted here in Eric Fraser's original art for Radio Times.

It has been pointed out to me that there is something of a size-disparity-issue in relation to the figures of Legolas and Gimli on the far right side of the illustration.