Ernesto Neto (or, to give him his full name, Ernesto Saboia de Albuquerque Neto) is a contemporary Brazilian artist whose site-specific "immersive, sensory installations" The Edges of the World can be explored ('seen' is far too passive a word) at The Hayward Gallery in London's Southbank Centre.

Neto is a good name for an artist who has done the more for nylon netting than anyone since whoever it was who invented women's tights - and with considerably more imagination! Basically Ernesto's world is constructed out of slot-together wooden struts (often vaguely resembling bones) over which is stretched a lot of nylon netting weighted down with stones...

...and joined to other structures with stocking-like tubes that resemble connective tissue.

Neto's work has been described as "beyond abstract minimalism". His installations are large, soft, biomorphic sculptures that fill an exhibition space that viewers can touch, poke, and even sometimes walk on or through. These are made of white, stretchy, stocking-like material -- amorphous forms stuffed with Styrofoam pellets or, on occasion, aromatic spices.

In some installations, he has also used this material to create translucent scrims that transform the space's walls and floor. His sculptures can be regarded as expression of traditional abstract form, but in their interaction with the viewer, they work on another level as well.

That is certainly true and visitors spend a very happy hour or more wandering through Neto's mysteriously secretive environment and, last weekend, that included David, Sophie and myself...

And here are some of the things we photographed...

While David was photographing Sophie...

And I looked on and laughed...

The Edges of the World continues on show until 5 September. And Google has a great many (and varied) images of Ernesto Neto's work.

And you'll find more photos from our visit on my flickr photoset, Arty-facts.

A friend in The Magic Circle e-mailed me recently, saying: "Put me out of my misery! Is that you on the sausage stall in the Churchill [car insurance] advert where he takes part in a tug-o-war? It certainly looks like you!"

You can see the commercial in question on YouTube and here's a screen-grab of the guy on the sausage stall...

So, what do you think? Is that just a Sibley look-alike? Or is it actually me doing a bit of sneaky cookery practice for Come Dine with Me?
Posted by Brian Sibley at 00:01 10 comments 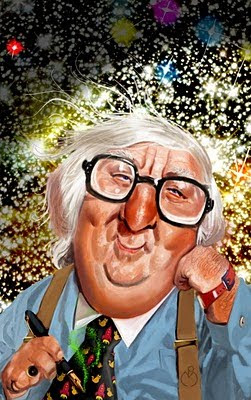 This letter is one of my most treasured possessions and, as I read it now, I can still remember the thrill which which I read it then...

It was the beginning of thirty-six years of correspondence (enough to fill four large folders) that has continued, latterly, via e-mail and fax. Here's just one of many personally decorated envelopes that contained a Bradbury missive...

We met first in London, but, subsequent visits, have taken place at the Disney Studio in Burbank, Disneyland in Anaheim, EPCOT in Walt Disney World, Florida and at Ray's book-and-memorabilia-crammed home...

Me and Ray in 1995
Photo: Malcolm Prince

If Ray Bradbury had only ever written The Martian Chronicles – his dream of the lives of those who journey to and live on the Red Planet – he would have secured a place in literary history, but he also wrote that sublime portrait of childhood (that is also a compelling psychological thriller), Something Wicked This Way Comes and his dystopian nightmare of an era where books are burned, Fahrenheit 451 as well as dozens of novels and collections of short stories and verses.

I believe some of my very best radio work was done in dramatising some of those stories for two BBC Radio 4 series entitled Ray Bradbury's Tales of the Bizarre which had personal introductions by the author on how he came to write them.

When I asked Ray which book – like the characters in F451 – he would commit to memory if the literary arsonists ever came to power, he told me, it would be Charles Dickens' A Christmas Carol. That is why, when I wrote a book about Dickens' classic, I asked him for a testimonial for the wrapper. He did me proud... 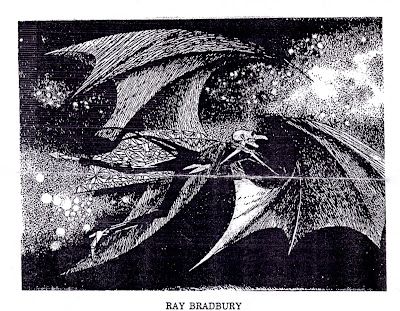 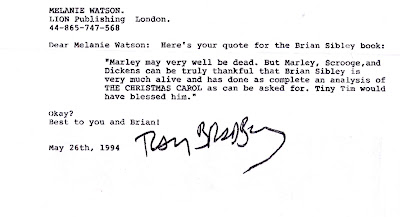 Today gives me a chance – in addition to wishing my friend and hero a very happy 90th birthday – to say "Thank you!" to a writer of extraordinary vision. From the moment, on a hot July day in my teens, that I read my first Bradbury story ('The Fog Horn') in my first Bradbury book (The Golden Apples of the Sun) he seized my imagination, shook it awake and hauled it screaming with terror and delight into other worlds that I had only previously visited in my dreams.

From that summer day on, I became a different person to the one I might have been because of his gift for seeing the miraculous in the mundane and the tremendous possibilities in the trivial and his unerring talent for prising open the thoughts and emotions of an astonishing range of beings - humans, aliens, robots, puppets and dinosaurs - and giving us an empathetic understanding of their hopes and fears. 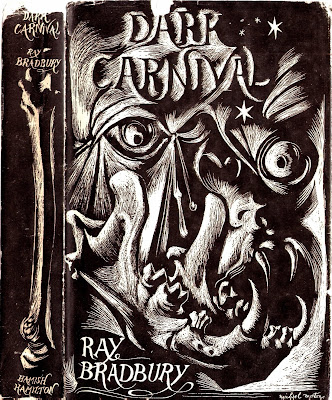 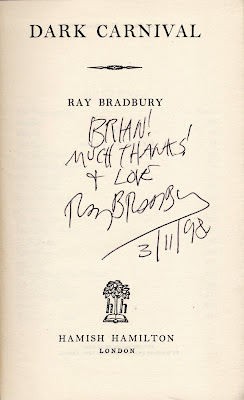 Ray recounts a story from his own childhood of visiting one of the side-show attractions at a carnival where Mr Electrico touched the boy with the fizz and crackle of the electric power that he let run through his body as part of his act and told him to live for ever! With one book (that was the first of many) Ray did just that to me!

Older and wiser, I now know that living for ever is not (at the moment) a biological option, but we can live forever through the chain-reaction by which we pass on our genes or, for those of us who are childless, our enthusiasms, passions and whatever other influences, great or small, rub off on everyone with whom we interact.

As for Ray, he will live as long as books (in whatever form they take) are read – and not burnt. Selfishly, I also hope we will have the man himself around for a good few more years yet! 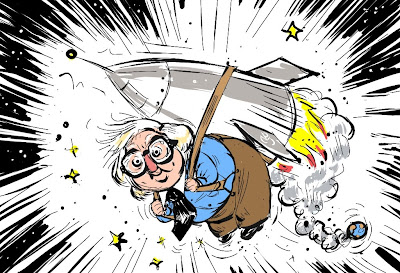 NOTE: As reproduced on this blog, Ray Bradbury's address and phone number have been edited from the letterheads out of respect for his privacy.

There's more about Ray and his connections with Walt Disney on my Decidedly Disney blog.

You can read about one of my encounters with Ray in The Bradbury Machine.

And here are some of my thoughts on a few of his books: the one that started my love-affair with Ray's writing, The Golden Apples of the Sun, his autumnal tale celebrating the last day in October, The Halloween Tree (with a follow-up note from Ray, and his enduringly evocative masterpiece, Something Wicked This Way Comes.

Admirers of Ray's works also need to know that the best website devoted to all things Bradburyesque is the endlessly diverting and informative Bradbury Media.

AGE OF NOT BELIEVING

As I was standing, recently, shivering on the brink of accepting a job that is going to be one of the most challenging I have ever undertaken in my career, I came across this inspiring quote from an address given by General Douglas MacArthur in 1955: 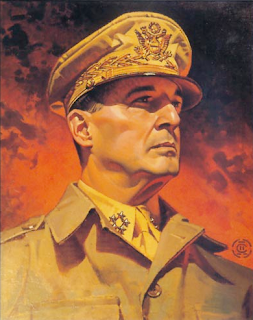 Youth is not entirely a time of life it is a state of mind. It is not wholly a matter of ripe cheeks, red lips or supple knees. It is a temper of the will, a quality of the imagination, a vigor of the emotions, a freshness of the deep springs of life. It means a temperamental predominance of courage over timidity, of an appetite for adventure over love of ease...

Years may wrinkle the skin, but to give up interest wrinkles the soul. Worry, doubt, self-distrust, fear and despair — these are the long, long years that bow the head and turn the growing spirit back to dust.

Whatever your years, there is in every being's heart the love of wonder, the undaunted challenge of events, the unfailing childlike appetite for what next, and the joy and the game of life.

In the central place of every heart there is a recording chamber; so long as it receives messages of beauty, hope, cheer and courage, so long are you young. When the wires are all down and your heart is covered with the snows of pessimism and the ice of cynicism, then, and then only are you grown old...

Or, to put it another way, courtesy of song-writers Richard and Robert Sherman, from the 1971 Walt Disney film, Bedknobs and Broomsticks...

Among the latest products from Alexander McQueen there are items packaged thus... 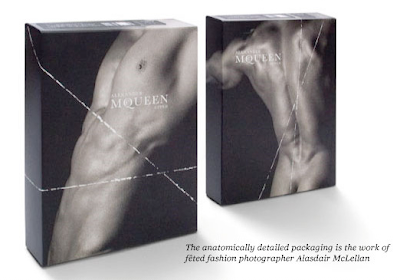 So, what are the products in question (or, more to the point, in the boxes) and is that "anatomically detailed packaging" by "fêted fashion photographer, Alasdair McLellan" representative of what is inside (Advertising Standards Authority alert) or merely a 'serving suggestion'?

Here's some more images from the fêted Mr McLellan.
Posted by Brian Sibley at 00:01 6 comments

Just before the Elephant Parade left London in June, the entire herd were corralled in the grounds of the Royal Hospital, Chelsea, where thousands of pachyderm-lovers went to to bid them farewell – including me!

There they were, lined up, row by row...

And here are a few of the those (not previously sighted on this blog) that caught my eye, beginning, appropriately considering the setting for their gathering, with a Chelsea Pensioner Elephant...

There were, amongst the ranks, elephants disguised as other animals...

And one for fans of Sherlock Holmes... "It's elephantry, my dear Watson!"

And a particular favourite of mine featuring a hare and moon...

...with, in the eye of the hare, the sign of the Infanta de Castile – the Elephant and Castle...

I even, finally, managed to track down the elusive Cloudia who made her first widely publicised appearance going round on the London Eye and then (presumably with help) moved around town to different locations.