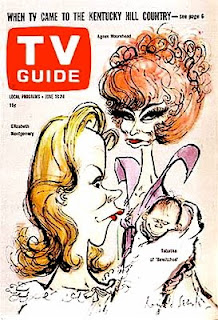 Writing, recently, about Ronald Searle at 90 reminded me that there's connection between this great cartoonist and illustrator and one the favourite TV shows from Sibley's '60s teenage years.

Bewitched, as you may recall (or have been told by elderly maiden aunts), was a popular American sit-com about the everyday life of a witch married to a mortal who is desperately trying not to use her magical powers in middle-class suburbia.


In June 1966, Ronald Searle provided a cover for the television-listing magazine, TV Guide, featuring two of the stars of the series: Elizabeth Montgomery who played Samantha Stephens, the 'witch' in 'bewitched', and Agnes Moorehead who (after years of serious thesping with the likes of Orson Welles and his Mercury Theater Company) won international celebrity as Sam's flamboyant and idiosyncratic mother: the unstoppable, un-top-able, Endora...

The caricature of Ms Moorehead is fantastic, although I can't help feeling that Baby Tabitha looks not unlike an infant version of Searle's 'skoolboy', Nigel Molesworth, and the portrait of Ms Montgomery is, I think it's fair to say, a tad less flattering than the way she appeared on the series' animated title sequence... 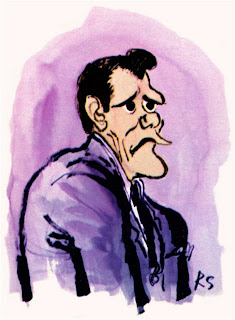 In addition to the cover, Searle additionally provided a number of illustrations for the interior of this issue of TV Guide, including a likeness of Montgomery's first co-star, Dick York, as Sam's long suffering and perpetually perplexed husband, Darrin Stephens.

Despite playing the straight man in this high-camp comedy, York showed himself to be the master of comic timing in his reactions to Sam's nose-twitching bewitchery and Endora's magical machinations and Searle certainly caught York's almost permanent condition of wincing, brow-furrowing anxiety.

The other cartoons show Searle's inventiveness in getting behind-the-scenes and into the show's premise.

Here he is imagining the team of technical advisors...

Here we get a peek into the secrets of the make-up room: the idea of some Macbethian hag being made-up to look like Ms Montgomery is pure genius...

And a glimpse of Sam performing on-set, off-screen magic on director William Asher (at the time Mr Montgomery), the hapless Dick York and an unidentified 'chippie'...

According to one of my favourite bloggers, Kevin Kidney (who first posted Searle's cartoons back in 2008), Searle was not exactly bewitched by the programme itself, observing: "I know that the canned laughter underscoring those mournful lines in Bewitched is the laughter of lost souls. Who else would applaud so hysterically the words: 'What's for breakfast, Sam?'"

Whether it's out of sentimental nostalgia for my lost youth, I don't know, but I still laugh at Bewitched... 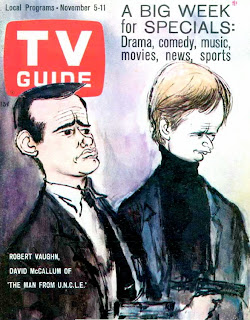 You'll find more of Ronald Searle's art for TV Guide here (the cover on the right shows Robert Vaughn and David McCallum, the stars of The Man from U.N.C.L.E.) on Matt Jones' endlessly diverting Perpetua: Ronald Searle Tribute, where you will also discover a great deal more about the world according to Searle.

And may I mention that The Cartoon Museum is hosting a series of talks about the life and work of Ronald Searle that you might enjoy.

Here are details of the first three talks:

Wednesday 28 April: Collaborative Visions - The Illustrations of Ronald Searle by - er - well, by Me, actually!

Oh, yes! And, finally: you can find out pretty much anything you've ever wanted to know about Bewitched (and much that you haven't!) at Bewitched @ Harpies Bizarre.

Oh I miss Bewitched so much! I used to twiddle and wrinkle my nose to try to get the washing up done and my room tidied - it never worked of course!
hapja: the first moment of realisation that nose-twitching WORKS!

It must be showing somewhere on Belgium TV, surely! I thought episodes of Bewitched were permanently playing on all TV networks the world over! They certainly should be!

When last I looked there were some pristine episodes of BEWITCHED on the streaming-site HULU, but I think they're region-restricted. One of the cable channels in LA - I think it's TV Land on Channel 75 - sometimes runs back-to-back episodes for most of a day.

The caricatures of Vaughn and McCallum put me in mind of Mort Drucker's glorious MAN FROM UNCLE parody in MAD magazine. Drucker was a genius, I feel - his images were somewhere between caricature and honest portrait. I always assumed that his movie parodies were achieved with lots of reference material to hand, until I read that the MAD artists and writers would simply buy tickets for a afternoon show and wing it from that.

Thanks, STEPHEN, and of course they are available on DVD (at least in the US).

I also loved Drucker's MAD parodies and it is fascinating to know that they plotted those spreads sitting in darkened movie-houses! Brilliant! Anyone not familiar with Mort Drucker's work will find several pages of great images starting here.

The original film on which the TV people got the idea was "I Married A Witch", which is also very funny, but quite different. There was a habit of taking movies and turning them to TV shows - now it is the other way round - and "The Ghost and Mrs Muir" was another, and in the UK, of course, "The Blue Lamp".

Thanks, Tony! Yes, I MARRIED A WITCH with Veronica Lake and Frederic March was a great film and, as you say, quite different from the TV series, but it inspired a classic piece of '60s TV...