BOYS WILL BE BOYS... 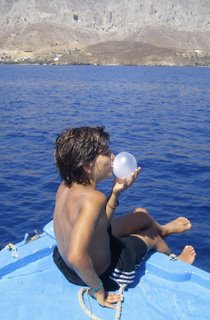 The world over, they are the same…

In and out of mischief more times than can be easily reckoned; riding the mood swings of a rollercoaster; sometimes leaning towards manhood and independence, but just as often falling back into vulnerability of being a child…

Making catapults, kicking footballs, building tree-houses, blowing bubblegum bubbles until they burst all over the face and, ideally, get so thoroughly stuck in the hair that the gum can only be removed by the application of ice-cubes!

Themelis demonstrated his bubblegum-blowing skills during our day trip to Telendos and - being a boy - showed considerable interest in the denizens of the island’s nude bathing beach. Whilst being hidden away in a tiny cove in order to avoid distressing locals of a nervous disposition, they are exposed to twice-daily viewing by the passengers on the passing Telendos boat - especially when Themelis has persuaded the skipper take his boat closer in to the shore than usual!

Somebody with a sense of humour seems to have picked out that beach for that use. Its hardly an unbroken stretch of golden sand is it ? I can imagine its rather craggy on the unprotected bottoms of those whose intention is merely to return to nature.I'm not totally convinced by the shape of that yellow parasol in the middle either .......

I know from personal (and regular) experience that there is gravel/sand at the shore and not simply pebbles. The sunbeds and umbrellas are kept in remarkably good order bearing in mind the remoteness and difficulty of access to the beach if not arriving by boat - which some locals will do.

Thanks for the local detail!