CALL OF THE WILD

The man who took us by the hand and led us to Where the Wild Things Are and Outside Over There; deciphered the Sign on Rosie's Door and showed us what it was like In the Night Kitchen.

Higglety Pigglety Pop! I refuse to believe it!

Maurice Sendak was the greatest American illustrator of his generation and one of the true fabulists of the twentieth century whose mythology will live on for at least another hundred years.

I dearly wish I could have met him – we'd have had so much to talk about: not only did I adore his work with a passion; but we shared a mutual love of illustrated books, comics and old movies, George MacDonald, the Brothers Grimm and Uncle Walt.

And, I now discover, we both admired William Blake and Herman Melville...

Wild Things 2? No! "Go to hell!" How totally right you were, Mr Sendak.

Here's his autograph in one of my favourite books, Caldecott & Co, in which he wrote intriguingly about Beatrix Potter, Maxfield Parrish, Edward Ardizzone, Hans Christian Andersen, Jean de Brunhoff and Randolph Caldecott...

In that book he commented:

Despite the fact that I don't write with children in mind, I long ago discovered  that they make the best audience. They certainly make the best critics. They are more candid and to the point than professional critics. Of course, almost anybody is. But when children love your book, it's "I love your book, thank you. I want to marry you when I grow up." Or it's "Dear Mr Sendak: I hate your book. Hope you die soon. Cordially." 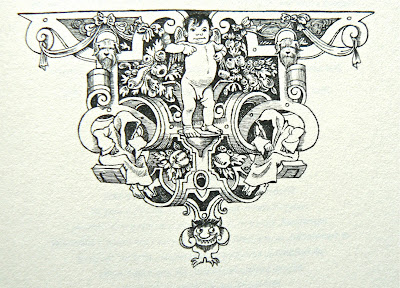 Although he lived a long life, I've been crying intermittently all day over this loss. I've loved Mr Sendak's work all my life, and with every interview with him that I read or heard, I fell in love with him even more. He was a true human, in every best sense of the word.

I studied Sendak's work while enjoying a fellowship at Princeton that allowed me to work with the great scholar of children's literature, Uli Knoepflmacher, and it gave me an intense appreciation for Sendak's body of work. Losing him is, for me, like losing a soul mate: he was a writer, an artist, a gay man, and a supreme curmudgeon. Those are all things that often go unappreciated in our world, alas. As I wrote to Uli yesterday, here's hoping the great man is now sitting in the front row of the World Mother Goose Theatre watching Miss Jennie perform with her salami mop!

Thank you so much for sharing that video, Brian, as well as your perfect words about this man. So many tributes are flying about the internet right now -- he, himself, is the perfect tribute.