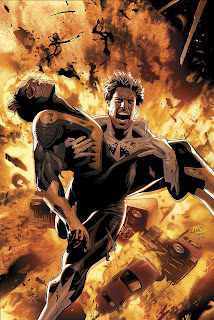 I wonder whether Nick Clegg is a comic book fan?

Do you suppose – when he's not fagging for Head Prefect Cameron – that Cleggers is closeted away in the Tuck Room reading the latest X-Men adventures?

I ask because it occurs to me that he may just have been encouraged in his dedication to the cause of 'gay marriage' (currently causing so much Conservative apoplexy) by the revelation that one of Marvel Comics' superheroes is about to enter into a same-sex union.

Northstar (left) was the first openly gay comic book character. True identity, champion skier, Jean-Paul Beaubier, is a mutant who can move and fly at near light speeds and possesses superhuman stamina, endurance and reflexes.

Northstar's sexuality was somewhat nervously revealed in 1992, but a decade on he has proposed to his partner, Kyle, and the pair are to set be wed on 20 June in issue 51 of Astonishing X-Men. 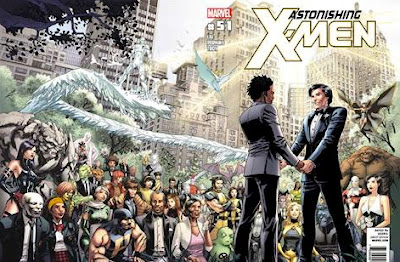 Not to be out-done, rival comic book publishers, DC Comics have let slip that they are about to "reintroduce a DC character who was previously straight and will now will be 'one of our most prominent gay characters'.” Who will it be? Superman? Batman? Robin? Wonder Woman? Time will tell...

Meanwhile, maybe Cleggers ought to get some extra copies Astonishing X-Men No. 51 for the Prefect's Common Room.

My money is on Batman and Robin!

Funny you should say that: see Wednesday's Guardian.

Of course it could be Wonder Woman...

Nice to see some good news to compensate for all the hate going on right now.
About time too, it was beginning to be rather common in fiction, but comics are lagging behind. So far all I've seen is lesbian sex, mostly as a male fantasy, but not many real love stories.

Gotta be Batman and Robin... (and now I must click through to that Guardian article.)

Good that the comics are finally getting their act together.

It has to be Batman & Robin - people have been putting money on their homosexuality for decades!