The other week I was giving a talk to a bunch of American students visiting Britain on a course devoted to Children's Literature. My subject was talking animals in literature (from the serpent in the Garden of Eden to manifestations of Parseltongue in the Harry Potter books) and coincidentally – while I was in the midst of my researches – David and I were looking out items from our collection for a new exhibition at The Cartoon Museum entitled...

Animal Crackers is a celebration of an amazing ark-load of creatures who, across many generations, have been put to work by cartoonists, illustrators and film-makers in the interests of humour and satire. 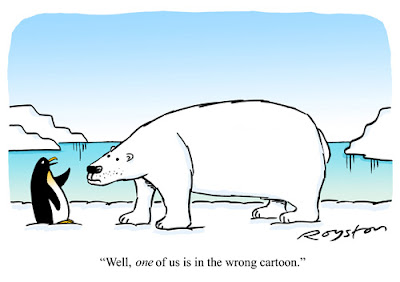 There are cartoons featuring animals as national types or political groups across several centuries from John Tenniel and David Low (whose Coalition Ass is, surely, ripe for revival!) to today's satirists, Steve Bell and Martin Rowson.

But best of all are those animals simply horsing around or monkeying about for the sheer fun of it or, as in these two cartoons, re-defining the term 'bird brain'... 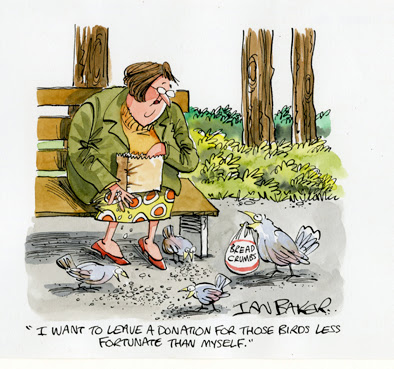 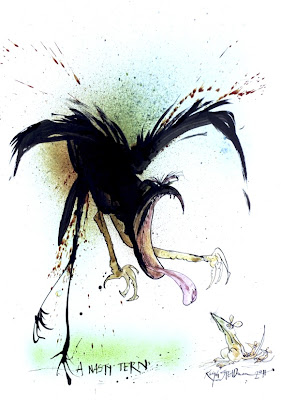 There are people behaving like animals and animals dressed up like people, as in this example, 'Hare Dressing', by one of Dickens' illustrators, John Leech... 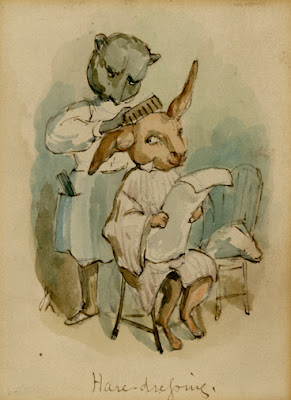 Among the more than 140 exhibits by 60 artists you'll find, cheek by jowl, Korky the Kat... 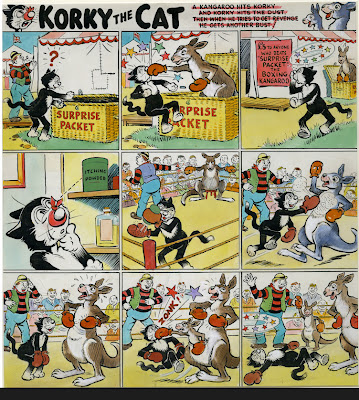 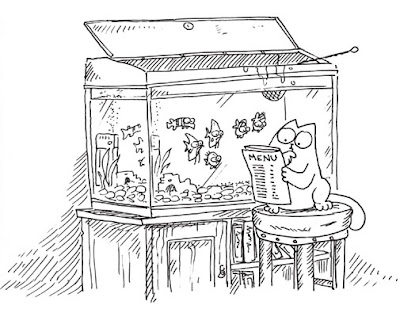 There are perennial favourites like Fred Basset, Rupert Bear, Flook and one of Thelwell's endearingly obstreperous ponies... 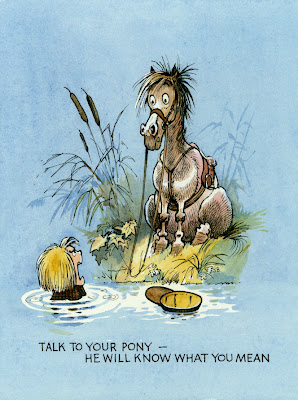 There are also a number of rabbits in evidence from this literary imagining (from our collection) by Michael fflokes... 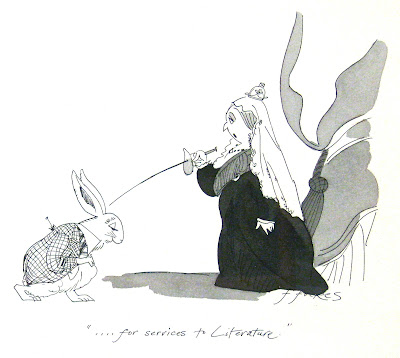 ...to the black humour of Andy Riley's Bunny Suicides... 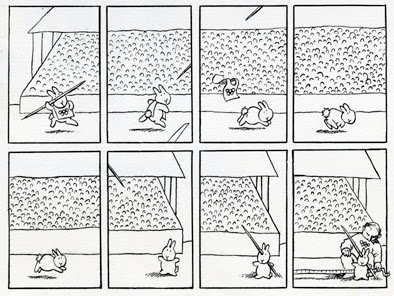 From the nation's comics you'll meet a range of amusing animals from Pip, Squeak and Wilfred (a bizarre vintage menage featuring a dog, a penguin and a rabbit) and, from the Beano, The Three Bears... 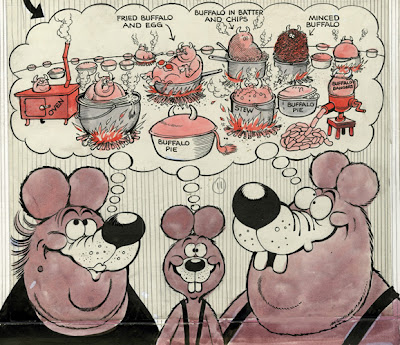 And from animated films there's the Pink Panther, Gromit (and Wallace) and assorted Disney folk from Max Hare and Toby Tortoise from the 1934 Silly Symphony, The Tortoise and the Hare... 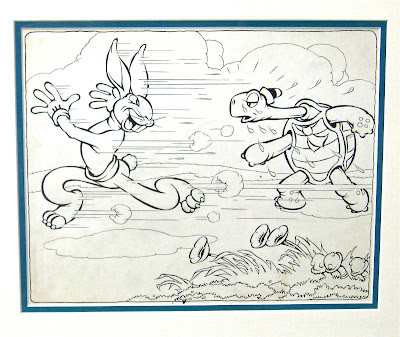 ...to that king of the swingers, The Jungle Book's King Louie... 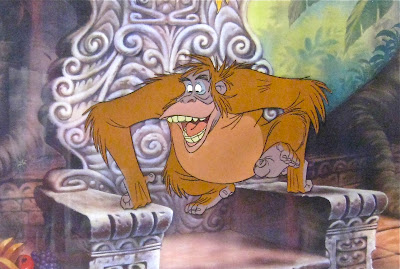 This wonderfully entertaining exhibition remains on show until 21 October.

ADMISSION:
£5.50 Adults; £4.00; Concessions; £3 Students Free to Under-18s
Art Fund Members and Friends of the Cartoon Museum
Children 12 or under must be accompanied by an adult

There are occasional special events arranged to coincide with exhibitions: check the Cartoon Museum website for up-to-date details and how to book. 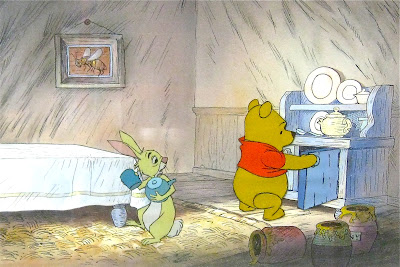 ...prompt me to let you know that the recent radio programme, The Songs of Milne that features the settings written by H Fraser-Simson for A A Milne's Christopher Robin verses and Hums of Pooh (in which I made an appearance) gets a repeat airing tomorrow (Saturday) on BBC Radio 4 at 13:30. 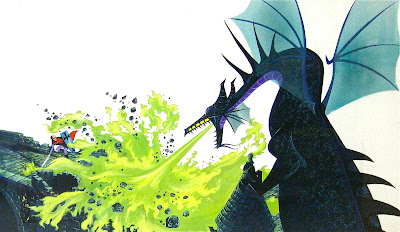 Hi Brian -- where did the Sleeping Beauty dragon battle image come from? I've searched the internet and can't find it. Really beautiful illustration!!

Ah, well now, Anonymous, that is an interesting question!

One of the first books about Disney animation that I read, when I was a young lad, was...

WALT DISNEY – The Art of Animation: The story of the Disney Studio contribution to a new art by BOB THOMAS with the Walt Disney staff with research by Don Graham, Golden Press, NY, 1958.

This book was only the second major study of the Disney Studio and the art of animation (following The Art of Walt Disney by R D Feild in 1942), and its major feature was that, whilst covering the Disney Studio's work to date, it was very much a celebration of the forthcoming feature, Sleeping Beauty (1959).

I had the book on almost permanent loan from my local library, poring over its text and images until I knew each and every page by heart!

In the early '90s, I was offered this piece of art by a dealer, described as a Disney illustration, but without any information regarding its provenance. However, I needed just one look to know that it came from that book that had so obsessed me some thirty years earlier!

Based on the climactic confrontation between Prince Philip and Maleficent in the form of a dragon, the picture appeared in WALT DISNEY – The Art of Animation on pages [70-71] illustrating how the sound effects of the fire-breathing dragon were created,
with reference to a US Army training film demonstrating the use of a flame-thrower. In the book, the blank upper left-hand corner of the artwork is occupied by the text for p.[70] and a black and white photograph of a soldier wielding a flame-thrower.

Needless to say, I didn't hesitate to purchase this, as you say, "really beautiful illustration"!

Bob Thomas (1922-2014), the book's author, would later write: Disney's Art of Animation: From Mickey Mouse to Hercules, the authorised biographies of the Disney brothers, Walt Disney: An American Original and Building a Company: Roy O. Disney and the Creation of an Entertainment Empire, as well as biographies of, among others, Harry Cohen, Irving Thalberg, David O Selznick, Fred Astaire, Joan Crawford, William Holden and Liberace.