A SAINT FOR ALL SEASONS 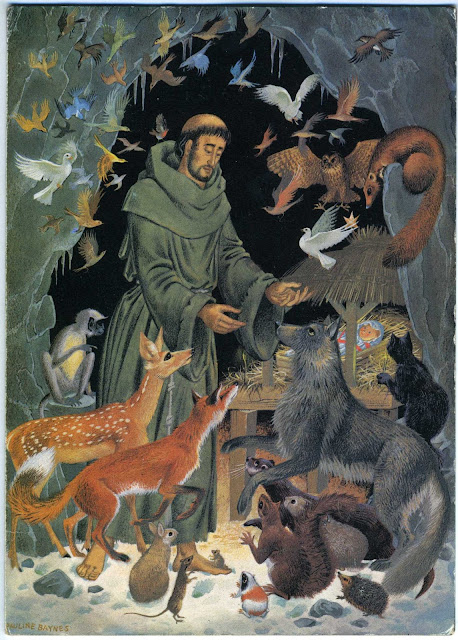 "If you have men who will exclude any of God's creatures from
the shelter of compassion and pity, you will have men
who will deal likewise with their fellow men."

Today is the feast day of St Francis of Assisi depicted, above, by Pauline Baynes and featured in this poem by Henry Wadsworth Longfellow:


Up soared the lark into the air,
A shaft of song,
a wingéd prayer,
As if a soul released from pain
Were flying back to heaven again.
St. Francis heard:
it was to him
An emblem of the
Seraphim;
The upward motion
of the fire,
The light, the heat,
the heart's desire.
Around Assisi's convent gate
The birds, God's poor who cannot wait,
From moor and mere and darksome wood
Come flocking for their dole of food.
"O brother birds," St. Francis said,
"Ye come to me and ask for bread,
But not with bread alone to-day
Shall ye be fed and sent away.
"Ye shall be fed, ye happy birds,
With manna of celestial words;
Not mine, though mine they seem to be,
Not mine, though they be spoken through me.
"Oh, doubly are ye bound to praise
The great Creator in your lays;
He giveth you your plumes of down,
Your crimson hoods, your cloaks of brown.
"He giveth you your wings to fly
And breathe a purer air on high,
And careth for you everywhere,
Who for yourselves so little care!"
With flutter of swift wings and songs
Together rose the feathered throngs,
And singing scattered far apart;
Deep peace was in St. Francis' heart.
He knew not if the brotherhood
His homily had understood;
He only knew that to one ear
The meaning of his words was clear.


The American poet and anarchist, Kenneth Rexroth, wrote in his 1974 book, Communalism:

St. Francis is not only the most attractive of all the Christian saints, he is the most attractive of Christians, admired by Buddhists, atheists, completely secular, modern people, Communists, to whom the figure of Christ himself is at best unattractive. Partly this is due to the sentimentalization of the legend of his life and that of his companions in the early days of the order.

Many people today who put his statue in their gardens know nothing about him except that he preached a sermon to the birds, wrote a hymn to the sun, and called the donkey his brother. These bits of information are important because they are signs of a revolution of the sensibility — which incidentally was a metaphysical revolution of which certainly St. Francis himself was quite unaware. They stand for a mystical and emotional immediate realization of the unity of being, a notion foreign, in fact antagonistic, to the main Judeo-Christian tradition.

The legacy of St Francis is not just a deeply symbolic one, it is, as much as anything else, about a down-to-earth, common-sense philosophy of life. Of the many sayings credited to him, is this one which I especially like:


Start by doing what's necessary; then do what's possible; and suddenly you are doing the impossible.

BTW, I've only just noticed your Lens on London series. Absolutely smashing. Do you publish those in a book yet?

Oohhh, Saint Francis, too amazing to be real, but he was real. Not only a little friar with good intentions, a kind of ambassador in eastern borders, during the crusader`s wars.

Il poverello d'Assisi. I used to have one a picture of him in my wallet.


Thank you Brian, with this memory today I will not forget give my greetings to some Francis today.

Woman on a Raft – Thank you, but, sadly, no book! I'd love to publish some of my photos of London (or Venice) but (despite all my experience in other areas) don't know where/how to start... But, please, enjoy! You might also like some of my (and David's) Venetian photos.

Eudora – Thanks! Yes, I love the film, too. I've not seen it right through for years, but scenes from it are seared into my memory for all time: the mark of a truly great filmmaker.

When I saw the subject of the Blog, I assumed that on this, your Anniversary, a photo of David would follow!

Now we only have Brian May left !

May I use this picture of St. Francis as a facebook post or is it subject to copyright?

It is copyright, Tara, how were you proposing to use it? OK to show someone but not reproduce without permission...