THE CORMORANTS OF VENICE 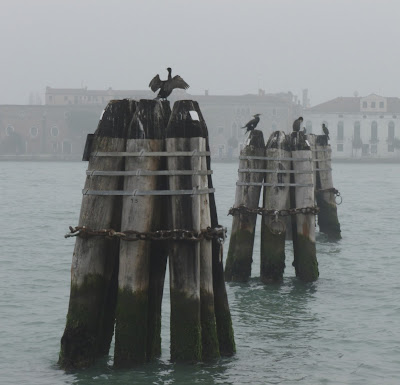 It is a common sight in Laguna di Venezia (and here in le Canal de la Giudecca) to see cormorants perched atop the stanchions, opening and closing their wings. Whilst spending their lives in and on the water, a cormorant's feathers are not waterproof, hence their need to dry them after fishing. In past centuries, these fisher-birds were themselves hunted on the Lagoon in what has been described as a form of underwater falconry. Just such a hunt was depicted some 500 years ago by Vittore Carpaccio...

But the cormorant has another Venetian connection via the Bard. Wanting a name for the villain of his play, The Merchant of Venice, William Shakespeare selected Shylock.


The book which was read by Elizabethans for everything relating to the later Jewish history, and which went through edition after edition, was Peter Morwyng's translation of the pseudo-Josephus, A compendious and most marveylous History of the latter Times of the Jewes Commune Weale... In Marlowe's Jew of Malta, and elsewhere in the plays of Elizabethan dramatists, the influence of the book can be detected.

Near the beginning of the History we read: "About that time it was signified also to them of Jerusalem that the Askalonites had entered in friendship with the Romans. They sent therefore Neger the Edomite, and Schiloch the Babylonian [my italics], and Jehochanan, with a power of the common people; these came to Askalon, and besieged it a great space. Within the town was a Roman captaine called Antonius, a valiant man, and a good warrior."

This passage, suggests Gollancz, may well account not only for 'Shylock' but also for 'Antonio', the Merchant of the title.

And Shakespeare, the inveterate player with words, may have also made another connection: the Hebraic word for 'cormorant' is 'shalak', (meaning 'plunging' or 'darting down') as can be seen in the list of forbidden, 'unclean' creatures listed in Leviticus 11: 17...

12 Anything living in the water that does not have fins and scales is to be regarded as unclean by you. 13 These are the birds you are to regard as unclean and not eat because they are unclean: the eagle, the vulture, the black vulture, 14 the red kite, any kind of black kite, 15 any kind of raven, 16 the horned owl, the screech owl, the gull, any kind of hawk, 17 the little owl, the cormorant, the great owl, 18 the white owl, the desert owl, the osprey, 19 the stork, any kind of heron, the hoopoe and the bat.

The cormorant, because of its voracious appetite, also came to be a symbol of usury as can be seen from a 16th Century reference to attempts to rescue "poor debtors" from usurers and "the claws of such cormorant harpies".

Shylock, the Jewish moneylender, may, therefore, owe some aspect of his name to the shalak, the cormorant of Laguna di Venezia, that would have been a familiar sight both to him and to Antonio, the Merchant of Venice...

Interesting...and love all the photos.