I am deeply saddened to hear of the passing of David Warner. It is a sign of our lazy times that he is described in several obituary headlines as 'OMEN and TITANIC actor'. Yes, he was especially excellent in The Omen as the sympathetic investigating photographer who meets an particularly nasty end, but he gave an extraordinary range of performances in many other movie: Tom Jones, Morgan: A Suitable Case for Treatment, The Ballad of Cable Hogue, Straw Dogs, Cross of Iron, Time After Time, The Man With Two Brains, Time Bandits and Tron to mention but a few.
He played many villainous characters but also capable of great sensitivity as can be seen in his portrayal of Bob Cratchit in the US American TV film of A Christmas Carol opposite George C Scott's Ebenezer Scrooge. But (more easily overlooked in our film/tv orientated times) he was also a stellar member of the one of the all time great RSC companies and, under the direction of Peter Hall, was unquestionably the Hamlet of his generation.
I was privileged to work with David on three of my BBC radio epics, beginning with my 1985 Sony Radio Award-winning dramatisations of Mervyn Peake's Titus Groan and Gormenghast in which he portrayed a tragic, languid and melancholic Lord Sepulchrave, 76th Earl of Groan. Then, in 2011, when I tackled Peke's trilogy of novels afresh as The History of Titus Groan, he played "The Artist": storyteller, character and what might, perhaps, be best described as a possible 'ghost of Mervyn Peake'; he was wonderfully moving – haunting in fact – and the series won me the BBC Radio Drama Award. I viewed David as my lucky talisman.
So, in 2014, I requested the directors of my six-hour dramatization of T. H. White's The Once and Future King to cast David as the mercurial Merlyn: a role he relished and played to perfection – by turn, wise, funny, solemn and playful; He was T. H. White's living-backwards-through-time wizard to a 'T' ('H' and 'W'!).
Had any other radio drama commissions come my way, I would have moved heaven and earth to have found him a role! I adored his acting and I loved the man.
With his resigned, lived-in (almost world-weary) features, he was modest and self-effacing, but – to the delight of any dramatist or director – he was a player with a phenomenal, always surprisingly and intriguingly nuanced, talent and it was always a talent that was but lightly worn. He was, I believe, one of the great (and seriously underrated) actors of our time.
The signed photo below is one I took of him in the BBC drama studio during the recording of The History of Titus Groan. 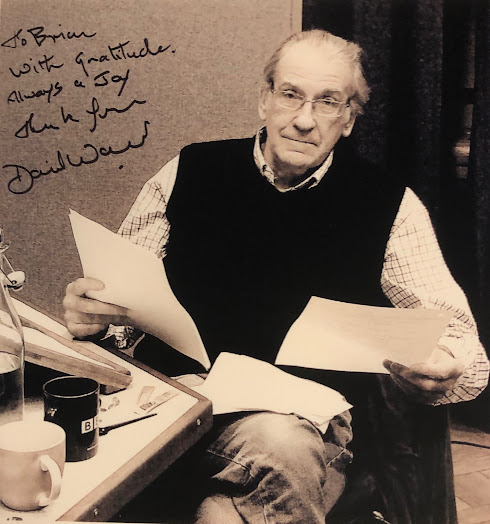