THE RISE AND FALL OF NÚMENOR

If you're eagerly anticipating the September debut of Amazon Prime's The Lord of the Rings: The Rings of Power, then you may like to know of this forthcoming publication devoted to J.R.R. Tolkien.'s writing about the Second Age of Middle-earth... 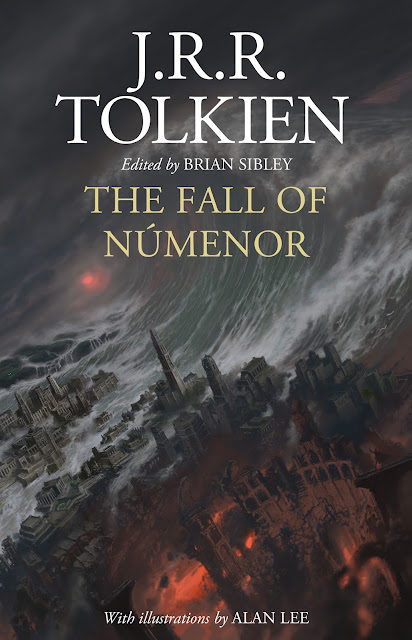 J.R.R.Tolkien's
THE FALL OF NÚMENOR
and Other Tales from the Second Age of Middle-earth
Edited by BRIAN SIBLEY
and Illustrated by ALAN LEE
Published by HarperCollins

HarperCollins is proud to announce the publication in November 2022 of THE FALL OF NÚMENOR by J.R.R. Tolkien, edited by writer and Tolkien expert, Brian Sibley, and illustrated by acclaimed artist, Alan Lee. The book will be published globally by HarperCollinsPublishers and in other languages by numerous Tolkien publishers worldwide.

Presenting for the first time in one volume the events of the Second Age as written by J.R.R. Tolkien and originally and masterfully edited for publication by Christopher Tolkien, this new volume will include pencil drawings and colour paintings by Alan Lee, who also illustrated The Lord of the Rings and The Hobbit and went on to win an Academy Award for his work on The Lord of the Rings film trilogy.

J.R.R. Tolkien famously described the Second Age of Middle-earth as a ‘dark age, and not very much of its history is (or need be) told’. And for many years readers would need to be content with the tantalizing glimpses of it found within the pages of The Lord of the Rings and its appendices.

It was not until Christopher Tolkien presented The Silmarillion for publication in 1977 that a fuller story could be told for, though much of its content concerned the First Age of Middle-earth, there were at its close two key works that revealed the tumultuous events concerning the rise and fall of the island-kingdom of Númenor, the Forging of the Rings of Power, the building of the Barad-dûr and the rise of Sauron, and the Last Alliance of Elves and Men.

Christopher Tolkien provided even greater insight into the Second Age in Unfinished Tales of Númenor and Middle-earth in 1980, and expanded upon this in his magisterial 12-volume History of Middle-earth, in which he presented and discussed a wealth of further tales written by his father, many in draft form.

The Hobbit was first published in 1937 and The Lord of the Rings in 1954–5. Each has since gone on to become a beloved classic of literature and an international bestseller translated into more than 70 languages, collectively selling more than 150,000,000 copies worldwide. Published in 1977, The Silmarillion sold more than one million copies in its first year of publication and has gone on to be translated into almost 40 languages.

Brian Sibley says: ‘Since the first publication of The Silmarillion forty-five years ago, I have passionately followed Christopher Tolkien’s meticulous curation and scholarship in publishing a formidable history of his father’s writings on Middle-earth. I am honoured to be adding to that authoritative library with The Fall of Númenor. I hope that, in drawing together many of the threads from the tales of the Second Age into a single work, readers will discover – or rediscover – the rich tapestry of characters and events that are a prelude to the drama of the War of the Ring as is told in The Lord of the Rings.

Alan Lee says: ‘It is a pleasure to be able to explore the Second Age in more detail, and learn more about those shadowy and ancient events, alliances and disasters that eventually led to the Third Age stories we are more familiar with. Wherever I had the opportunity when working on The Lord of the Rings and The Hobbit, I tried to imbue pictures and designs with an appropriate antiquity, an overlayering of history and of echoes of those older stories, and The Fall of Númenor has proved a perfect opportunity to dig a little deeper into the rich history of Middle-earth.’

The Fall of Númenor will be published by HarperCollins with a simultaneous global publication date of November 2022, and subsequently in translation around the world.

The streaming series, The Rings of Power, set during the Second Age of Middle-earth, will be released by Amazon Prime in September 2022. 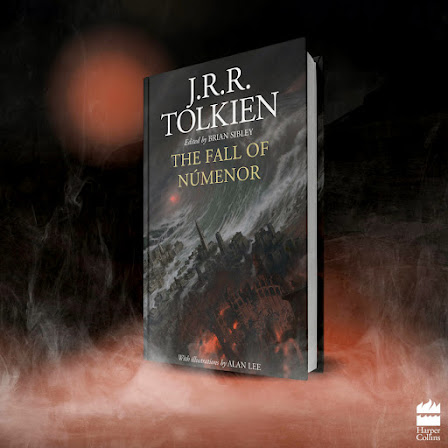 Labels: books, The Lord of the Rings, Tolkien