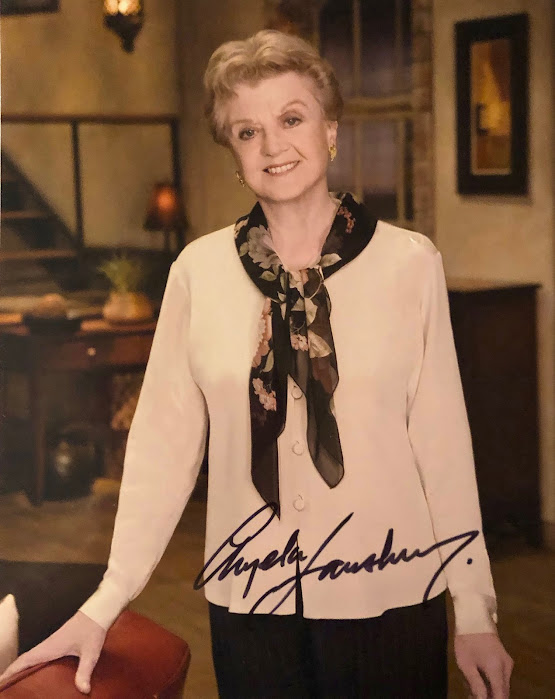 The death of Dame Angela Lansbury is sad news, albeit at the grand old age of 96. Vibrant, elegant, funny, magnetic, impeccably stylish and superbly talented, she was the very epitome of what it means to be a 'Star'.

On stage, film and television, she created unforgettable characterisations: from the devious maid, Nancy Oliver in Gaslight, her debut role, aged 19, that earned her an Oscar nomination) and Sibyl Vane (The Picture of Dorian Gray) to Mrs. Eleanor Iselin (The Manchurian Candidate, perhaps her finest film roles) and Miss Jane Marple (The Mirror Crack'd); on stage she starred in Jerry Herman's Mame playing Patrick Dennis' wildly unorthodox aunt, an exuberant Mother Rose in Gypsy and the first – and surely the greatest – of the many Mrs Lovetts who have aided and abetted the Demon Barber of Fleet Street in Sondheim's Sweeney Todd.

She gave stand-out supporting roles in dozens of films – musicals, comedies and epics – including The Harvey Girls, Till the Clouds Roll By, The Court Jester and Samson and Delilah and, years later, created the long-running TV sleuth, Jessica Fletcher.

For Disney she was both the amateur witch, Eglantine Price, in Bedknobs and Broomsticks and the voice of the cosy-comfy Mrs Potts, the talking (and singing) tea-pot in the original animated Beauty and the Beast.

Angela enjoyed a huge late success when she returned to Broadway and the West End as Madame Arcarti in Noel Coward's Blithe Spirit and she made (as it turned out) a farewell cameo as the Balloon Woman in the film Mary Poppins Returns.

I met and interviewed Angela many years ago now for radio series on Disney and the history of cinema and I hugely enjoyed the encounter, finding her charming, witty, smart and, unsurprisingly, razor-sharp. When I was reckless enough to ask whether the Cockney Mrs Lovett had, perhaps, a kinship with Mrs Potts, she looked momentarily aghast and replied very decisively (even severely): "I really don't think Mrs Potts has anything in common with the accomplice to a serial killer!" Happily, she then laughed and we moved on...

I can also testify that Angela Lansbury was the perfect hostess at dispensing the most English tea-and-biscuits I've ever enjoyed in Hollywood! 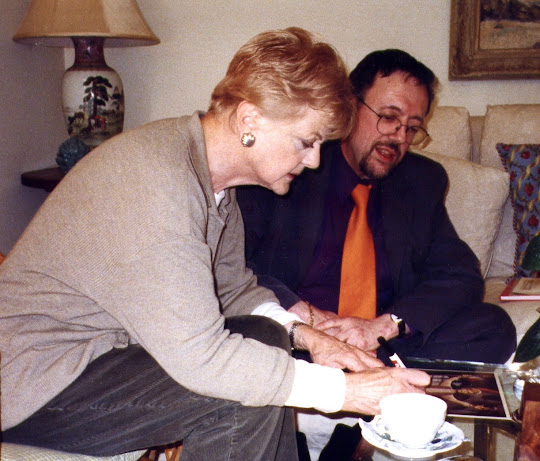 After our interview she signed a cinema lobby-card from Bedknobs featuring Miss Price intoning her magical incantation beginning "Treguna Mekoides...".

As you can see, she inscribed the image: "For Brian, I said What? Love, Angela Lansbury". 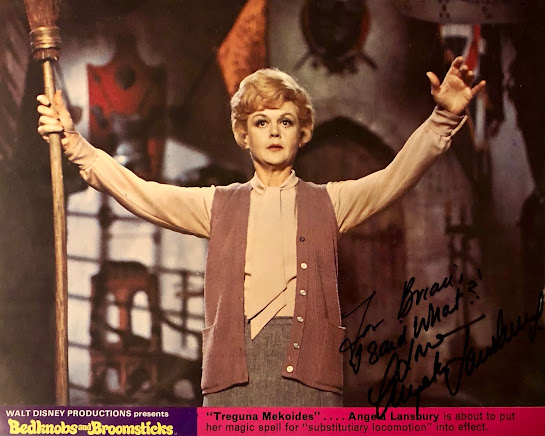 The world is very much the poorer for her departure, but our entertainment heritage is hugely the richer for her having passed among us.

[Photo of Angela Lansbury and BS by Malcolm Prince]