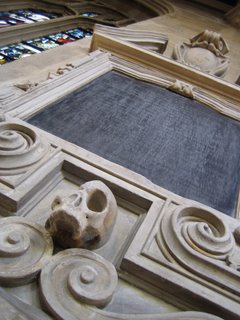 Am I alone in finding myself thinking, at least once a day - and probably far more frequently - about DEATH?

I don’t mean the mystery of what happens when people set off for that “undiscover’d country from whose bourne no traveller returns”, but one’s own, very personal encounter with the Grim Reaper…

Maybe it's just my own chronic morbidity and melancholia, but I really do think about it a great deal and quite often in the small hours of the night when, it is said, the greatest numbers of people die. I find myself wondering when and how it will happen for me and in what state of health and frame of mind I am likely to be in at the time.

Once, when I was interviewing Terry Pratchett, author of the ‘Discworld’ novels in which Death is an ever-present character, I asked: “What would you do if the door were to whisper open now and a cowled figure were to glide in and lay his bony fingers on your shoulder?”

Pratchett replied: “Well, there’s nothing I COULD do! But it’s really not something I fear - I’ve always taken life as it comes…” Then, after a moment’s pause, he added: “Which, of course, is precisely what Death does --- takes life as it comes!”