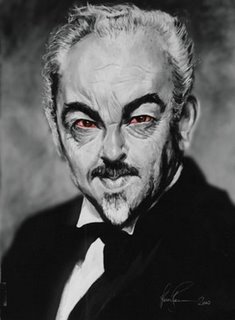 The other week at The Magic Circle, I had the honour of introducing master magician David Berglas (depicted left by Derren Brown) to an audience made up of members of The Young Magician's Club...

Among the topics David touched upon in his talk was the work of the extraordinary Dutch draughtsman, M C (Maurits Cornelis) Escher, whom he met towards the end of the artist's life and whose remarkable graphic designs he greatly admires, representing as they do drawn equivalents of a magician's illusions.

I was reminded both of Escher's brilliance and my own youthful discover of his baffling realisations of optical illustions such as waterfalls that run uphill and never-ending staircases... 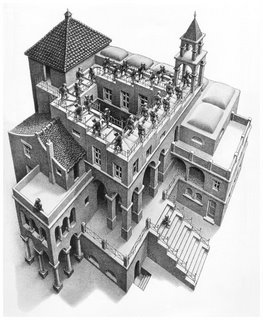 I also fell in love with Escher's many other stunning pieces that comment on the way in which we see, perceive and understand such as 'Three Worlds' with its trinity of images: beneath the water, on the surface and reflected in the water... 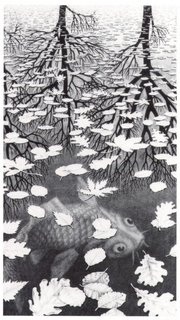 Whilst looking for examples of Escher's work to add to this blog, I stumbled across another amazing dimension to the Dutchman's fabulous conceits - the work of a LEGO enthusiast, Andrew Lipson, who has recreated Escher's drawings as three dimensional, perspective-gravity-defying models... 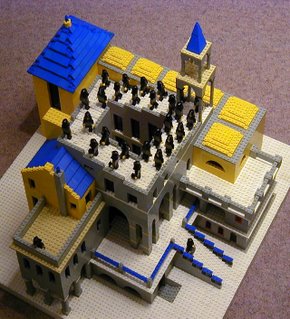 Visit Andrew Lipson's LEGO Page to marvel at his other outrageous creations that show just what you can do if you have sufficient LEGO bricks, enough (some might say, too much) time on your hands and a belief that you can make the impossible possible - such as this vertiginous version of Escher's 'Relativity'... 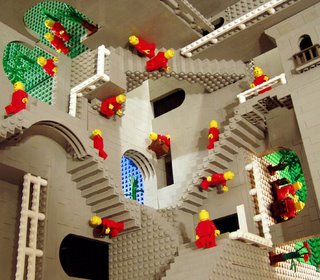 There are several sites devoted to showing (and selling) Escher's pictures including The Official M C Escher Website and one of the best books devoted to the artist is The Magic of M C Escher by J L Locker, published in 2000 by Abrams. 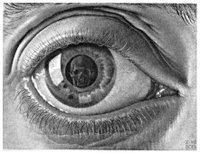 The one thing that is insufficently stretched in this modern world is our capacity for wonder. I think these images should be shown to children everywhere to stimulate their imagination. When I think of the things we used to enjoy - from the Harryhausen monsters to the cartoons of Ripley's 'Believe it or Not'.I hope that todays kids will cast a glance away from Eastenders once in a while and try to stir that amazing thing that is the human mind.

How on earth did he do that? Lego was my favourite toy when I was little (& not so little!) I would spend hours & hours designing houses & gardens, but always ran out of bricks in the end to hold up the roof, because my designs got too ambitious!