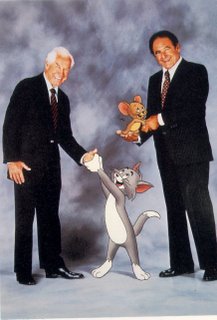 A fond farewell to Joseph (Joe) Barbera who died today, aged 95, and who, with his late creative partner William (Bill) Hanna created a cartoon pantheon that were the early evening (and later Saturday morning) household gods to several generations of children across the world.

Bill Hanna and Joe Barbera (right) established their brilliance in cartoon entertainment with MGM’s classic ‘Tom & Jerry’ cartoons (beginning in 1940 with Puss Gets the Boot), a series that came to rival the short films of the Disney studio in terms of animation art and - with their fast and furious pacing and legendary knock-about humour - all but eclipsed them in terms of popularity.

In the 1950s with the demise of MGM's cartoon unit and the emergence of television, Hanna and Barbera reinvented animation for TV, accepting the restrictions of limited budgets by simplifying the style and streamlining the production process but winning viewers with their strongly drawn characters and sharp, witty scripts.

Their first venture was The Ruff and Reddy Show which debuted in 1957, although I, personally, first became aware of their work during the following year when I was captivated, week-on-week, by The Huckleberry Hound Show featuring (in addition to the eponimous title-charcater who was a blue dog with a lazy drawl and a penchant for the song ‘Clementine’), the cat-and-mouse - or, rather "meeces" - act of Mr Jinx and Pixie & Dixie and one of H&B’s greatest creations, Jellystone Park’s “picker-nick basket” snaffling Yogi Bear who, with his side-kick, Boo Boo Bear, was the perpetual nemesis of the long-suffering Ranger Smith. 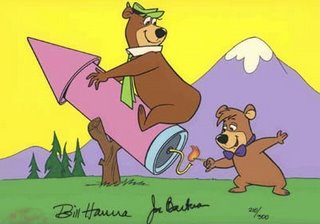 Numerous other shows followed - crowded with memorable cartoon characters such as - one of my personal favourites - Snagglepuss, the overly theatrical mountain lion (“Exit---- STAGE LEFT!!”) and the - to this day - universally beloved Scooby-Doo. And how can one not mention Top Cat (and the gang) or Quick Draw McGraw, Super Snooper, Augie Doggy and Doggy Daddy (“That’s my son!”) and those Wacky Races stars, Penelope Pitstop and Dick Dastardly - plus, of course, Mutley…? And you can undoubtedly add your own role-call of names because there are many of them! 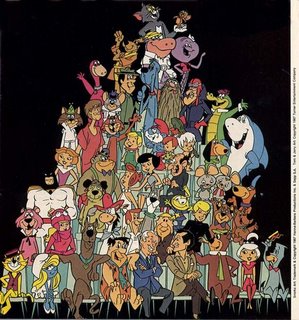 One brilliantly conceived and deftly scripted series, the long-running stone-age sit-com The Flintstones, bridged the generation gap and created animation with across-the-family-appeal that paved the way for the later success of The Simpsons. 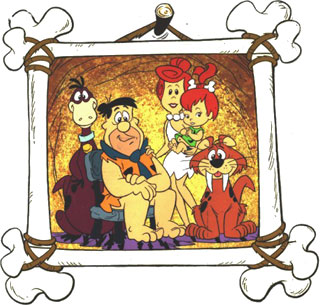 So, those who grew up with H&B cartoons salute the passing of one of the giants of television and say, “Yabba-dabba-doo! Thanks for all the fun!” 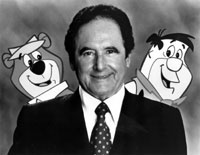 I was saddened to hear of Joe's death, but pleased that even Radio 4 played some HB theme tunes. It's true that HB deeply affected several generations. Tom & Jerry cartoons were among the few things that everyone in our household sat and watched together.