I was recently writing about the proliferation of urban myths on the Internet. Just a day or two later, I received - for the umpty-umpth time - another of these stories.

Wishing to encourage her young son's progress on the piano, a mother took her boy to a Paderewski concert. After they were seated, the mother spotted a friend in the audience and walked down the aisle to greet her. Seizing the opportunity to explore the wonders of the concert hall, the little boy rose and eventually explored his way through a door marked "NO ADMITTANCE."

When the house lights dimmed and the concert was about to begin, the mother returned to her seat and discovered that the child was missing. Suddenly, the curtains parted and spotlights focused on the impressive Steinway on stage.

In horror, the mother saw her little boy sitting at the keyboard, innocently picking out Twinkle, Twinkle, Little Star. At that moment, the great piano master made his entrance, quickly moved to the piano, and whispered in the boy's ear, "Don't quit! Keep playing!"

Then, leaning over, Paderewski reached down with his left hand and began filling in a bass part. Soon his right arm reached around to the other side of the child, and he added a running obbligato. Together, the old master and the young novice transformed what could have been a frightening situation into a wonderfully creative experience.

The audience was so mesmerized that they couldn't recall what else the great master played. Only the classic, Twinkle, Twinkle, Little Star.

Them comes the added-on homily…

Perhaps that's the way it is with God. What we can accomplish on our own is hardly noteworthy. We try our best, but the results aren't always graceful flowing music. However, with the hand of the Master, our life's work can truly be beautiful. The next time you set out to accomplish great feats, listen carefully. You may hear the voice of the Master, whispering in your ear, "Don't quit! Keep playing!" May you feel His arms around you and know that His hands are there, helping you turn your feeble attempts into true masterpieces.

And then the requests to “pass it on”, though thankfully, on this occasion, without veiled threats of what will happen if you don’t:

Remember, God doesn't seem to call the equipped, rather, He equips the 'called’. Life is more accurately measured by the lives you touch than by the things you acquire. So touch someone by passing this little message along. May God bless you and be with you always! And remember, "Don't quit! Keep playing!"

There are on Google no fewer than 647 links to this story or to a similar one in which the tune played is not Twinkle, Twinkle, Little Star, but Chopsticks.

Clearly this is a story that is more important in terms of its message than its veracity, for it exists in various versions endlessly retold by people who obviously feel no need to concern themselves with the trifling matter of whether it is ‘true’ and well as ‘TRUE’… 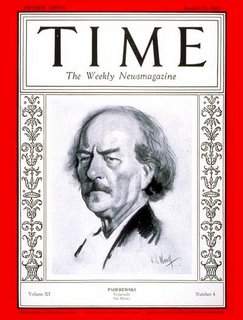 Curiously, it would mean as much as a story if it were simply about a child and any, unspecified, concert pianist. The adding of Paderewski’s moniker (particularly in an age when it is no longer a household name) does nothing except add supposed authenticity.

Or, perhaps, points us in the direction of the REAL story…

It is ironic that the first Google entry on this story is to be found on www.truthorfiction.com, under the title Paderewski and the Little Pianist and debunks the legend as follows:

There is no evidence this ever happened… Ignacy Jan Paderewski (1860-1941) was a Polish pianist who gained worldwide fame and was very popular in the United States.

Paderewski experts say the story may have been inspired by a poster during World War II that promoted a meeting in support of the Polish Relief Fund. Paderewski is said to have organized the meeting.

The poster included a sketch of Paderewski next to a boy at the piano.
The boy was carrying his belongings wrapped at the end of a stick and was called ‘Johnny the Wanderer’.

Having read this, and with Google's help, I tracked down that poster on Polish Music Newsletter, a site which confirms that Paderewski did, indeed, organize the Mass Meeting for the Polish Relief Fund at Madison Square Garden in March 1940, and reproduces the souvenir programme for the event showing the Maestro clearly encouraging ‘Jasio-wędrowniczek’ (Johnny the Wanderer) as he sits at the keyboard. 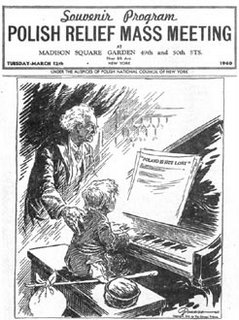 Incidentally, the title on the sheet music - ‘POLAND’S NOT LOST’ - is the first line of the national anthem, Dąbrowski's Mazurka.

Without taking anything from the underlying message of this Internet fable, I find it fascinating that the myth remains reliantly more potent than the fact…

Coming at the urban myth from the other side i.e. making the religious point using the story as an example (rather than it being the centrepiece) I don't really find it suprising it is so widespread. The churchgoers of America have a tradition, which isn't so developed here, of spreading these things by email to fellow believers and some of them, like this one, are remarkably good at illustrating their point and making it interesting.They don't start off with any pretension that the story is true but maybe,if it escapes out into the secular world, it just sounds better if it is. I suspect that these circulars are coming over here with a little distortion on the way. I'll leave you with another....
An arctic explorer has left his overnight base briefly, gets lost and falls into a crevasse.As he slides, he quickly unhooks his rope and iceaxe and manages to gain a hold so that he is left dangling on the end of it, too far down to climb up unaided but swinging dangerously. "God help me,I don't want to die" he prays and God answers him, "Let go of the rope". The mountaineer has faith but this is clearly rather a silly suggestion so he grips tighter and his hands freeze in that position. The next morning, they find him still there, holding tightly, dead as the provervial door nail.He is dangling just two feet from the ground. O ye of little faith.....

An inverted version, perhaps, of Joe Simpson's real-life experience as told in the book TOUCHING THE VOID.

The lesson: Whatever our situation in life and history -- however outrageous, however desperate, whatever dry spell of the spirit, whatever dark night of the soul -- God is whispering deep within our beings, "Don't quit. Keep playing. You are not alone. Together we will transform the broken patterns into a masterwork of My creative art. Together, we will mesmerize the world.

It's a good story, but I think there is something badly broken about writers who bung in a star's name and pass fiction off as non-fiction. That's just lying. I received this story along with a YouTube link. The video has actually been created around the lie. Now there are those who believe this bappened. This bothers me.

I haven't seen the YouTube link, but it bothers me, too...