FOOD FIT FOR A GOD

The age of miracles is not dead!

Only last week, Clare Allen from Rhondda, South Wales, took the lid off the family jar of Marmite, in order to put some on her son's toast, when she noticed the face of Jesus Christ in the lid! 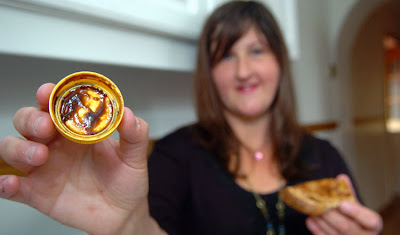 Mrs Allen's husband Gareth, 37, said he could not believe his eyes when he saw it. "When I first looked at it," he told reporters, "I wasn't sure, but when I moved it away from me it started coming out. I thought yeah, she's right - that's the image of Jesus." 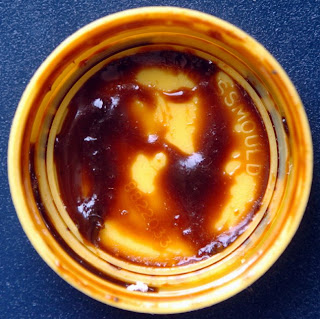 Mrs Allen said her 14-year-old son Jamie had also remarked on the likeness. She told the South Wales Echo: "Straight away Jamie said 'that looks like God', and my other boys (Robbie, four, and Tomas, 11) even said they could see a face. People might think I'm nuts, but I like to think it's Jesus looking out for us. We've had a tough couple of months; my mum's been really ill and it's comforting to think that if he is there, he's watching over us."

Mrs Allen went on, "I often see Jesus’ face in a lot of things I do. And there are a few times I can think of when I’ve seen the face of Jesus in a window. But he’s never appeared in my food before."

And what's happened to the miraculous Marmite?

"The kids are still eating it," said Mr Allen, "but we kept the lid."

That, of course, is how all the best relics get a start in life - or after life - or whatever...

Scarcely, you might argue, on a par with the Turin Shroud, but apparently it's not just through Marmite jars (or, at least, their lids) that the Almighty is making his divine presence felt in our modern world.

Roger & Sheila have alerted me to the fact that there are many powerful manifestations taking place - often in seeming mundane setting of the domestic kitchen...

In 1994, for example, a Florida woman, Diane Duyser, made herself a toasted cheese sandwich which turned out to be embellished with an image of the Virgin Mary... 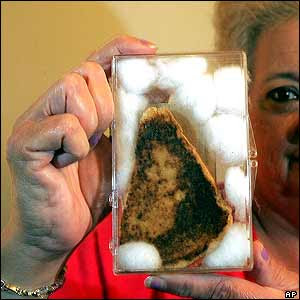 The fact that it has never gone mouldy - despite being kept in a plastic box - has been credited as proof of its unquestioned holiness and the fact that, a decade after being grilled, Ms Duyser sold her blessed sandwich to a casino for $28,000 is proof that, as P T Barnum said, "There's a sucker born every minute." Or, at least, once every ten years!

Prompted by the Duyser holy-toastie - or, maybe, inspired by the better-known miracle of the loaves and fishes - Ontario man, Fred Whan, revealed that he's got a fishstick in his freezer that, when it was being cooked (well, actually, over-cooked) in 2003, got another of those Jesus portraits seared on to it's underside... 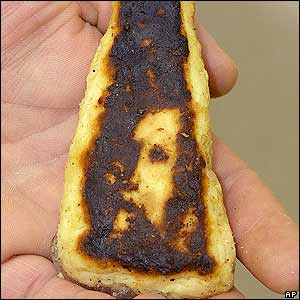 One can only marvel that such revelations can still occur in an age of reason and non-stick pans.

Then there's the church in Bangalore where JC turned up on a chapati which, fortunately, was saved before it got totally immersed in potato and pea sagu. 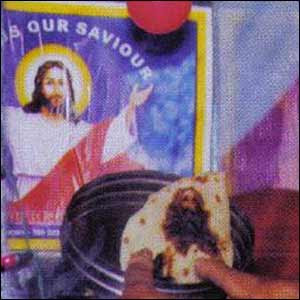 Then there's the case of Italian bar manager, Matteo Brandi, who, two years ago, found Jesus' face on an oyster shell... 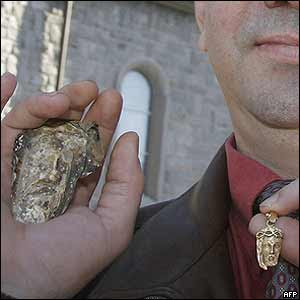 Highlighting - by way of a change - a non-food manifestation, there was a wooden fence in a caravan park in Port Germein, Australia, where a tree and a street light provide a nightly apparition of Mr Nazareth that, in 2000, was drawing crowds of wondering site-seers... And returning to the Mother of Jesus, she put in an unscheduled appearance in a Chicago underpass in the form of a curious stain on the wall that soon became the site of a shrine. Whilst the devout saw the BVM, the local authorities put the appearance down to a "build-up of salt..." 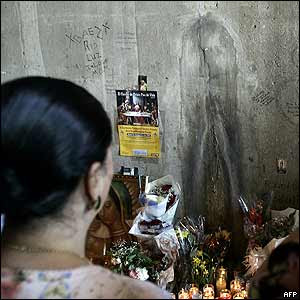 Visit the BBC News website to read more about the Marmite Master and other revelations including the story of non-practising Hindu, Sewdutt Maunick, who saw the image of Jesus on a hawthorn tree as he relaxed in his garden in Burgess Hill, Sussex.

Martin Luther, where art thou when we need you most?

New wonders have come to life (via that 'gospel' authority, The Daily Mail): in May 2008, a drinker spotted the face of Jesus in the foil of a bottle of larger... 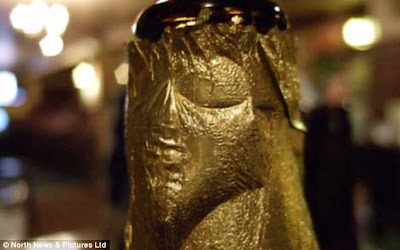 ...though whether the drinker is now on the wagon is not disclosed.

Here he is again, this time inside a Kit Kat bar... 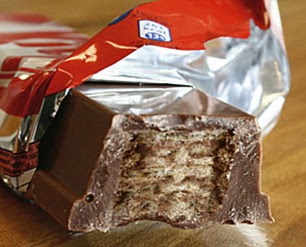 On a dirty shower curtain (I immediately went and checked my own)... 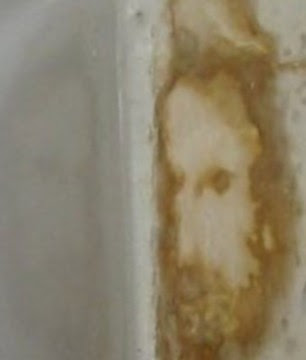 And finally, for now, an alleged appearance on a pavement last month in Greensboro, North Carolina. Personally, my faith fails me here and I can't help wondering if the Mail published a photo of the wrong pavement... 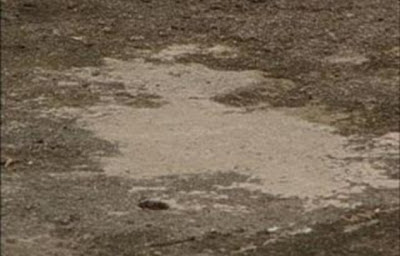 Or maybe it's just upside down... Who knows? Anyway, if you can see it you may be the very prophet this age of uncertainties is waiting for.
Posted by Brian Sibley at 00:01

I suppose I'm being sacreligious (not that I seem able to spell that...) by saying that the grilled cheese sandwich looks more like a movie star of the 1930s??? (Not sure which one.)

And all this brings new meaning to the song from Oliver!, "Food, glorious food..."

And there was something else I was going to say, but I've lost it now. Bother. That's what I get for being a bear of very little brain.

Now what was it Victor Meldrew used to say again?

In Spain the gastronomy, as you know, is different, some people see this things in other places like in a serrano or iberic ham, after cut a slice...

My, my!
With all those images of Jesus, there isn't one photo of him anywhere. Is it only me, or do others find that as strange as I do. With all of these people identifying Jesus as they have , there must be a Kodak print somewhere.
Mind, I did make an offering to a televangelist to get a signed autographed picture of John the Baptist.

SCB - You're right! It's Gloria Swanson!

SHARON - Well, yes, "I don't believe it!" either. But do you happen to know if there are any Jewish examples of images of Moses or one of the other patriarchs turning up on, say, motza?

EUDORA - Jesus on a slice of ham? That's a bit shocking seeing as that's the last thing he'd have ever eaten!

CERUMENTAL - Well, as it happens, there is a famous photograph of Jesus and you can view it here!

Matzo doesn't really lend itself to having images on it - unless it's of someone with a very lined face.
And I don't think many people have any preconceived ideas of what Moses looked like - guy with beard?

Thanks, Brian - using 'I'll say just two words to you' has forced me into telling the joke - which no doubt most people have heard.

Two men, one Chinese the other Jewish, are sitting on stools in a bar in New York having a beer.

Suddenly, the Jewish man punches the Chinese man on the jaw, sending him flying off the stool.

The Chinese man picks himself up, rubs his jaw, sits back down and says, 'What did you do that for?'

'Pearl Harbour! But that was the Japanese - I'm Chinese.'

The Jewish man says, 'Japanese, Chinese, Taiwanese - it's all the same to me.'

The two men continue with their drinks, till suddenly the Chinese man punches the Jewish man on the jaw, knocking him to the floor.

The Jewish man gets up, rubs his jaw and sits back down on his stool. 'What did you do that for?'

'I'll give you one word', says the Chinese man, 'Titanic.'

'Titanic! But that was an iceberg!'

'Iceberg, Greenberg, Goldberg - it's all the same to me!'

It would be interesting to read the contents on that Marmite jar.

I thought God was in the details but obviously it's the deli counter.

GD - I thought the Devil was in the detail, but perhaps I'd better be careful what I say lest a series of satanic manifestations start turning up in the contents of our supermarket trolleys.

I can't help wondering what all these good people are ON! I looked very carefully at all those pictures and half the time all I saw were smudges - and I'm a believer! Still I suppose if you start imagining what Jesus looked like without a photo, anything goes! Not very flattering though was it...
snessed: a pattern of seeds in a Bagel that looks like whoever you want it to look like...

You're right, SUZANNE: perhaps the clue's in the fact that Marmite comes in a 'pot'...?

I too wonder why they always assume it is Jesus.

There's probably a whole bunch of wandering bearded ghosts expending all their ectoplasm to get their faces on to food products, only to be bitterly disappointed when everyone thinks it's Jesus rather than the late Nigel Worthington from Croydon.

Nigel? Dead? I hadn't heard. How sad! I must check the lid of my peanut butter jar, at once...

Alleluia! He's appeared again! On yesterday's news, the BBC carried a story about an American couple who have found the figure of Jesus in a packet of cheese snacks. Seeing the picture, I think you would have had to be there to really appreciate the likeness.
The story's also carried at
http://www.metro.co.uk/weird/article.html?Cheesy_Jesus_appears_in_snack&in_article_id=666997&in_page_id=2

SHEILA - Thanks for sharing the Revelation of the 'Cheesy Jesus' (others' irreverence not mine!) and the film shown on the Metro on-line article is certainly more helpful than most of the still photos (I am still trying to see Jesus on that North Carolina pavement!) but I just love the comment in the accompanying copy:

"The blessed munchy was discovered by Dan and Sara Bell, inside a packet of Cheetos he bought at a petrol station for 99 cents. The snack Jesus stands about two inches tall, and appears to be in an attitude of prayer. Or possibly a zombie.

Yep, in my (good) book, it's definitely a zombie!

...and I think most of the images are Osama Bin Laden (obviously trying to infiltrate the Mid-West of the USA where many of these stories seem to originate. Don't tell the Homeland Security guys or we'll never be able to take snack food on a plane again.

Roger O B...
AMIDERE: Collective term for the Mid-Western states of the USA

There is a film called 'Zombie Christ'. Amazing concept but I saw the trailer and it looked awful.