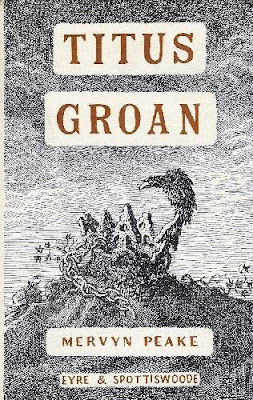 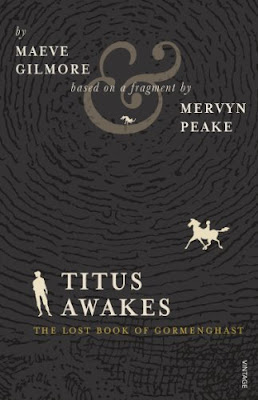 Meanwhile, interested readers can find out more about the many other events being staged to mark the Peake centenary at the official Mervyn Peake website.
Posted by Brian Sibley at 00:01

Now, I am going to rush away and look up this work and author......new to me.

Congratulations, must be wonderful to see your work being dramatize by, I'm sure, great actors...
I know something more about Mervyn Peake thnaks to the blog of argentinian ilustrator Quique Alcatena.

Lo – Not to discourage you, but it is a somewhat rare fruit (like a ripe pomegranate, perhaps) and not to everyone's taste. But should be tried at least once!

Eudora – Thanks so much for telling me about Quique Alcatena! I found his blog!

Congratulations on getting the scripts completed, Brian. So glad they were penned by you.

Looking forward to listening to the serialisation.

Oh, fabulous! I’ll forward to that. I’m afraid to say that in print I was defeated by the world of Gormenghast (although that was long ago so it should be time for me to give the books another chance where I may yet get to Titus’ last words) and I missed your previous (award-winning) adaptations of the first two novels on Radio 4 simply because 1984 was taken up with art school and occasionally alcohol (to help me forget that I was at art school).

Having caught the BBC’s rather overblown, carnivalesque television serial from the turn of the century, it seems that off the page the world of Titus Groan, very much like Tolkien’s Middle Earth, works better in audio form so the listener can hear the dialogue and use their imagination to visualize the characters and environment as the story progresses.

(As an aside, but having just given a mention to Tolkien, as much as I love the Peter Jackson adaptation in their extended DVD form, as soon as I wrote ‘Middle Earth’ Stephen Oliver’s wonderful theme sprang into my head along with the muttered chuckling of John Le Mesurier and Robert Stephens’ marvellously austere tones... which has put a big smile on my face).

I hope the recording goes very well and both you and the cast have a wonderful time.

It says something that both Lewis and Peake estates see only you to dramatise their famous texts. Similarly Disney, Tolkien and Nick Park know who to come to when they need an expert on their work.
I would say that's pretty good going :-)

Good Dog – Ah, the memories! :) I hope you may get a bit more out of visiting Gormenghast via the 'wireless' than you got from watching the TV raree-show.

Boll – Of course all these people (except Nick Park) are dead and, therefore, didn't have any choice!!

I hope to one day get back to this series. I read about half of the first book before it disapeared but I loved it. Someday soon I think. Is the production going to be available here in the states?
And thanks for becoming a follower! If I could only be a regular poster like you.

Huh, the title reminds me of the song "Tomorrow is Another Day" from The Rescuers.

Gosh! I hope it lives up the psych!

The BBC Radio 4 Drama online newsletter revealed cast details at the end of May.

The newsletter is no longer online, but the information reappeared on *Spoiler alert* Beebotron.

That's some cast! And I wonder if Sepulchrave's actor is reprising his role.

Radio Drama's Jeremy Mortimer has also tweeted about the production, and shows Steerpike in action...