NOT THAT IT MATTERS 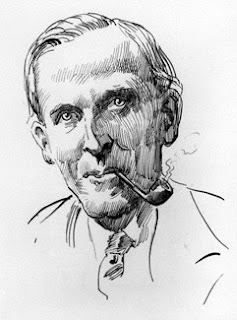 Today is the 131st birthday of one of my favourite writers, A A Milne.

Alan Alexander Milne is now pretty much only remembered as the author of verses about Christopher Robin and stories about Christopher's nursery companions, Winnie-the-Pooh, Piglet, Eeyore, Tigger and the rest, but there was so much more to his life and career: he was Assistant Editor on the humorous magazine, Punch and  a highly acclaimed novelist, essayist, polemicist and playwright.

In 1992, on the centenary of Milne's birth, I compiled Not That It Matters, a radio celebration, made up mostly of his own words taken from his plays, essays (a volume of which provided the title) and his quirky – often ironic – autobiographical writings.

Mr Milne was played by Hugh Dickson, a superb actor whom fans of The Archers will remember as Guy Pemberton and with whom I had the great pleasure of working on the radio dramatisation of The Lord of the Rings, in which he had played Lord Elrond.

Produced by veteran radio director, Graham Gauld, the characters in Milne's novels and plays were portrayed by a cast of radio stalwarts, including my dear friend, Antony Miall, who also played the piano and was Piglet to my Pooh in the "More it Snows, Tiddely-Pom" number! 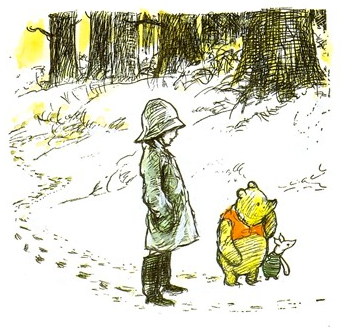 Since the snow is currently falling (at least where I am) why not make yourself a nice mug of hot chocolate and curl up for half an hour and enjoy this little tribute to the forgotten talents of a much-loved author –– not that it matters...

Images: Drawing of A A Milne by Harry Furniss; Illustration of Christopher Robin, Pooh and Piglet by E H Shepard

Labels: A A Milne, Antony Miall, Me, radio, Winnie-the-Pooh