This was the challenge: provide a caption or tell us what the child (or the alligators) might be saying... 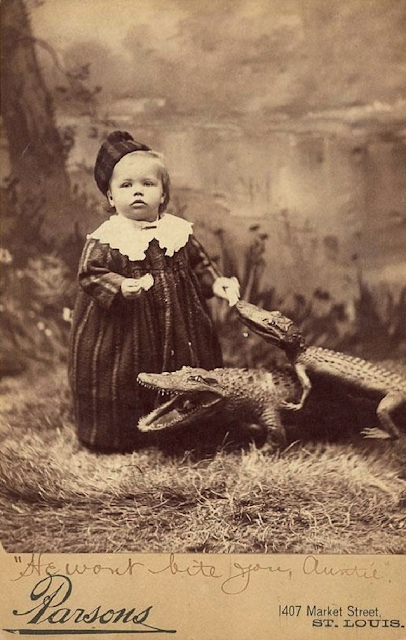 The original photo already had a caption – "He won't bite you, Auntie" – although, surprisingly, only two entrants made any reference to that.

NOT surprising was the proliferation of entries playing with the word 'snap', several others had cross-pop-cultural references (including Hal Roach's Our Gang film series from the 1920s/30s, Disney theme-park attractions, the movies of Steven Spielberg and the Just So Stories); there were also one or two that I have to confess I didn't altogether understand!

Anyway, thank you all for – as always – some really funny offerings that were independently judged  (without the names of the entrants being revealed) by, on this occasion, Sophie Walpole and David Weeks.

We begin with the...

LEO N HOLZER:
Baby needs a new pair of shoes – and a handbag, too!

PHIL:
"'Scuse me, but do you happen to have seen a Crocodile in these promiscuous parts?" [With apologies to Rudyard Kipling]
Family snaps.
"I urgently need a photo of my child, so make it snappy."

ROY MARSH:
"Are you sure you play 'snap' like this, Mum?"

JOHN VERNON LORD:
“I was always told that you shouldn’t bite the hand that feeds you."
“The other crocodile won’t eat potato crisps!”
PAUL VIGOR:
"Sausages!"

CHRIS HYDE:
And you thought your Christmas presents sucked!
"Are you sure the sign read 'Petting Zoo'?"
Cousin Kevin.
New White Star Service to Florida!
Prototype for Disney World.
Nature or Nurture?
"Dangerous? Nonsense! It's time to toughen up the lad!"
Brian was such a precocious child!
"There's no fee involved but we will provide lunch!"

ANDY CLOCKWISE:
"Be snappy and take the picture"

BOLL WEAVIL:
"Never bite the hand that feeds you – unless it's tastier than the stale bread it's holding of course!
"Just like that... what do you reckon? C’mon, I’m a dead ringer and you know it."
"Oh no! Another child ! Can't we send out for a take-away instead!'
"You do realise these creatures are not indigenous to this type of artificial scenery don't you?"

SATURDAY'S TOYS:
For Spanky's younger brother, even a date with alligators was safer than the Hal Roach Studios.

SUZANNE:
"Can I have my matching luggage now?"
"When you mentioned a crocodile walking to school, I didn't realise this was what you meant."
"For heaven's sake, hurry up with that photo... I've got three more crocs under this stupid dress!"
Croc (Singing): "How great it is to be bayouuuuuuuuuuuu."

ROGER OB:
[With reference to the original caption]
Older alligator (Reassuringly): "He won't bite you Audrey"
Small alligator (To older sibling): "Well, he looks as if he's already eaten the rest of our family"

BETH STILBORN:
"As God is my witness, I will never go on an outing with my nanny again!"

SHARON M:
"When Daddy asked me if I'd like to stand here for a few snaps, I didn't realise this is what he had in mind."
"If you think they look fierce, you should see what's under my outfit!"

JOHN VERNON LORD:
“I always like feeding crocodiles with an aphrodisiac, when they’re on the job, in order to intensify their experience”.

CHRIS HYDE:
A young Jack the Ripper in one of his happier moments.

VERONICA ZUNDEL:
"When my parents said they were taking me to Jurassic Park, I thought they meant the movie..."

JOHN HENRY BREWER:
"I do hope this doesn't become a caption competition photograph one day."

SECOND PLACE
BOLL WEAVIL:
"When I said I wanted a pair of ‘gaiters’ instead of this dress, this wasn't exactly what I had in mind!"

Many congratulations and thanks to everyone who entered. There will be another caption competition along very soon...

Received after the competition had been judged were the following captions suggestions from PAUL GOODING (aka Good Dog):

"I've been trying to teach them poker but they only know snap."

"What a rubbish couple of card sharks. That's not how you're meant to cut the deck!"

The boy next door was surprised by who he met under the bamboo tree.

Thanks for the commendation, Brian!