Tonight at 8:30 on BBC Two, I'll be contributing to a television special from The Culture Show entitled The Secret Life of Mary Poppins... 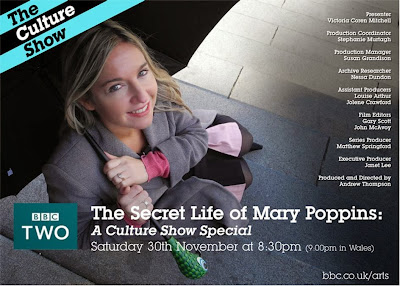 he programme will examine the author of the children's book famously filmed by Walt Disney in 1964 and now the subject of a new film from the Mouse Factory, Saving Mr Banks...

And here (excavated from a long-buried box of cassette recordings) is P L Travers herself talking about the famous nanny and much else besides – including an account of one of her encounters with the Irish poet W B Yeats that I somewhat inaccurately recounted during my recent appearance on Radio 3's Night Waves...

Saw the movie last week with a buddy of mine, and believe it or not: I expected to be disappointed with the results...I wasn't. :)

Watching the trailer prior to the screening, I thought Tom Hanks' portrayal of Walt Disney was flat-out wrong! He didn't sound or look like Walt at all. But it wasn't just that, he captured the spirit and personality of the man, and you certainly felt you were watching Walt.

I felt it was wise to watch 'Mary Poppins' again, and to tell you the truth the movie gets better every time I see it. I liked how the 'Mr. Banks' movie blends in some of the 'Poppins' film's dialogue to the film very neatly.

P.S. Sorry if I've hardly been commenting on this blog at all, I've been slacking a bit with catching up on blogposts, but I hope to make an effort from now on.

Hi, Steven, welcome back! Yes you are right about Hanks' performance: as an impersonation it was weak, but in capturing something of the man's personality and spirit it worked. And, yes, it is a stretch to have a Hollywood studio making a film about making one of their classics. I guess films about the making of The Wizard of Oz and Gone With the Wind will follow shortly! Hope you are well and happy.

'Gone with the Wind' and 'The Wizard of Oz', sound like a possibility, considering both films had a lot of conflict and difficulties during production (e.g. the injuries Margaret Hamilton suffered when her face caught fire, George Cukor being fired by Selznick for 'GWIW", etc.)

I'd love to see a biographical film about Stanley Kubrick, quite possibly my all-time favourite director..

Thank you for recommending this movie: I greatly enjoyed it, and I probably would have not gone if I hadn't read your blog about the film.