THE ONCE AND FUTURE PROJECT 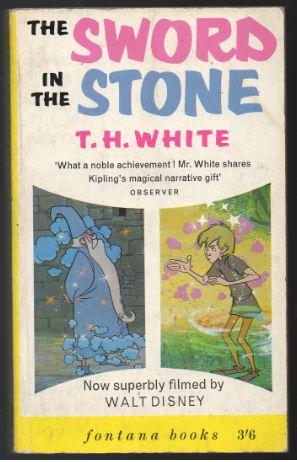 It all started 50 years ago, when I bought this paperback book...

I was already a devoted Disney-nut and had just seen – and hugely enjoyed – Walt Disney's 1963 animated feature The Sword in the Stone telling the story of the boyhood of King Arthur.

Released in the UK in 1964, the film caught my imagination for lots of reasons: the film's contemporary graphic style of animation (so frightfully 'sixties' in its look!), the delightful songs by the Sherman Brothers (with Merlin's tongue-twisting 'Higitus, figitus, migitus, mum, Prestidigitonium!' preceding Mary Poppins' 'Supercalifragilistic' song by a full year!) and, of course, the obvious appeal of a different take on the Arthurian romances with which, like so many boys of my age, I was already besotted. 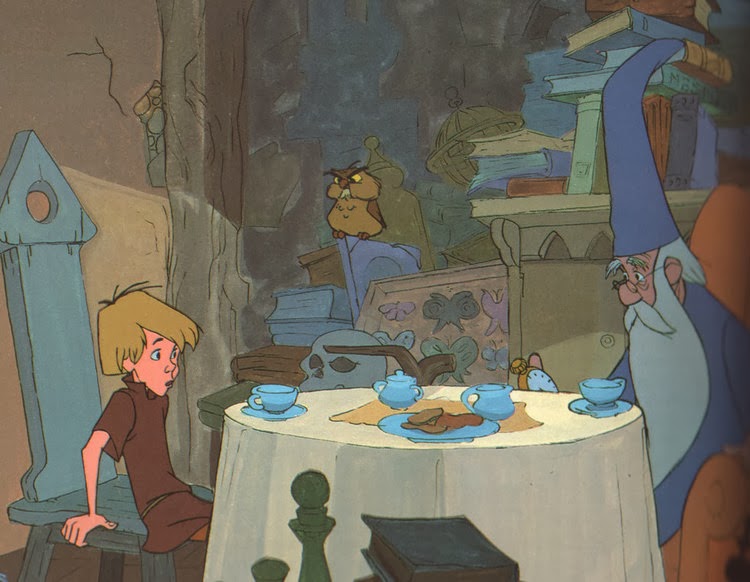 There was also the brilliantly funny set piece in which Merlin, engages in a wizard's duel with the Mad Madam Mim, during which the assailants repeatedly transform themselves into an increasingly bizarre menagerie of real and imaginary creatures... 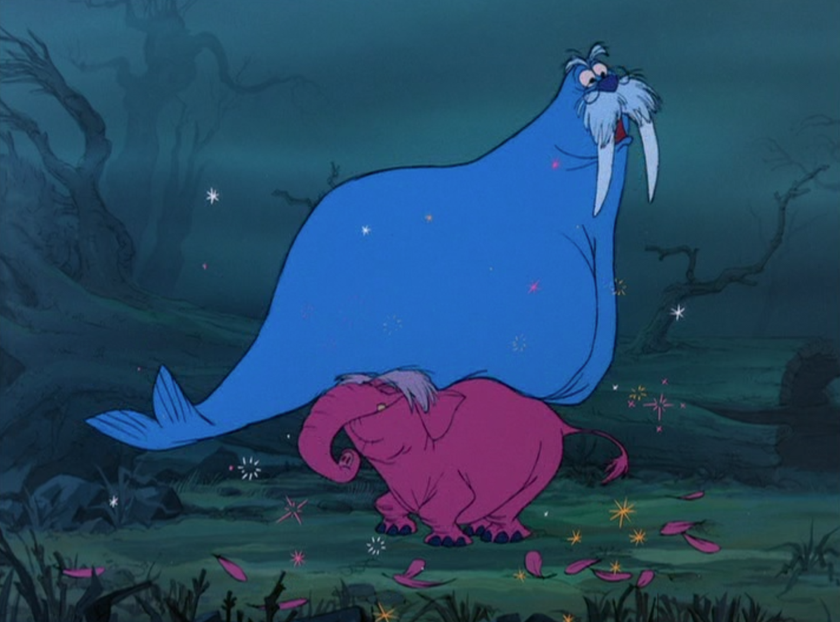 No wonder I was an eager purchaser of that paperback when I spotted it on the revolving book-rack in my local newsagents!

At the time of shelling out my 3/6, the name on the cover (the one that wasn't 'Walt Disney' ) meant nothing to me: I had no idea who T H White was, whether he was alive or dead or had ever written anything else. But within minutes of opening the book and starting to read, I was hooked! The sheer delight of the book came from the concept, unique to White, that Merlin – or, as he is in the book, Merlyn – lives backwards through time and, therefore remembers the future in the past

I read The Sword in the Stone at a sitting (completing it late into the night with a torch under the bedclothes!) and whilst I still loved – and, today, still love – the Disney film interpretation, I was now also devoted to the book on which it was based. 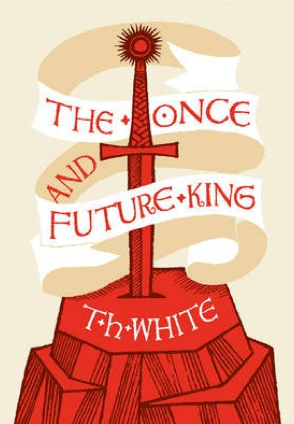 Over the years that followed, encouraged by my best friend at school, who already knew the writings of T H White, I began to read his other books: The Goshawk, Mistress Masham's Repose, England Have My Bones and the volumes devoted to the Matter of Britain that collectively became known as The Once and Future King.

This cycle of novels – The Sword in the Stone, The Witch in the Wood, The Ill-Made Knight and The Candle in the Wind, together with the posthumously published The Book of Merlyn – is extraordinary in managing to combine the familiar story of King Arthur, Queen Guinevere, Merlyn, Mordred, Sir Lancelot and the other knights of the fabled Round Table with a revisionist interpretation which has many topical resonances for our modern age – not least, White's trenchant observations on the nature of man and war.

My affection for The Once and Future King was further intensified in 1967 by Camelot, the film version of the Alan Jay Lerner and Frederick Loewe stage musical which, in turn was based on White's book... 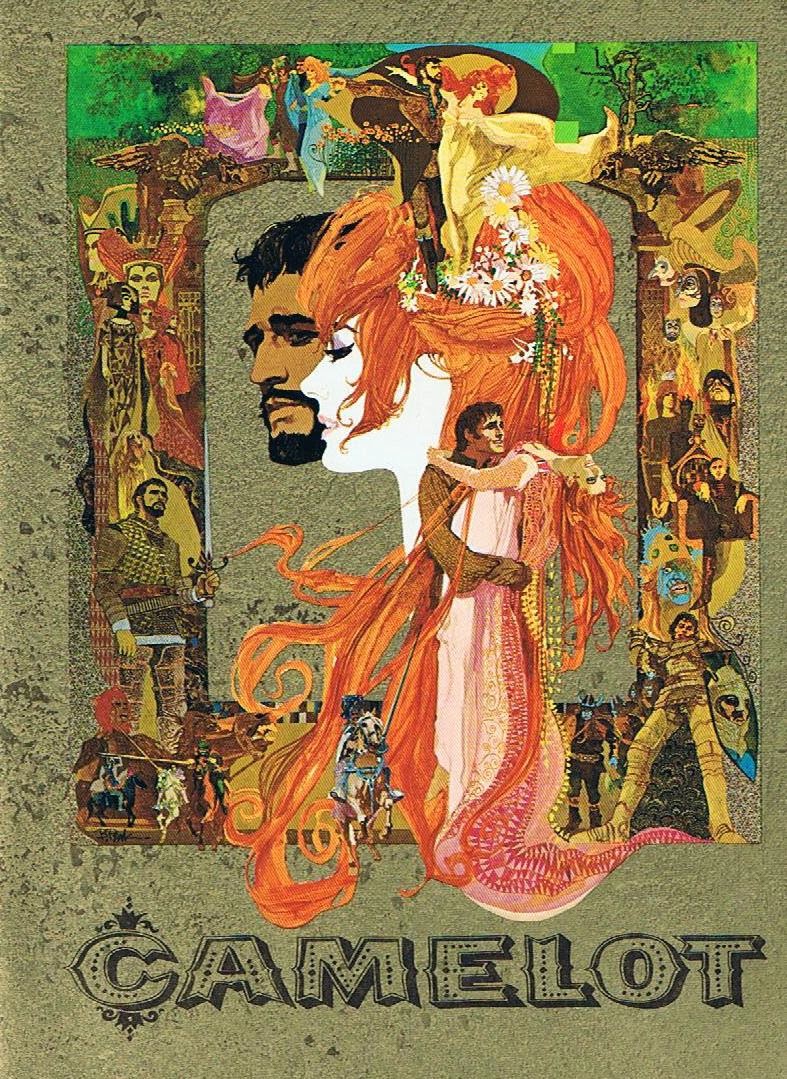 From the moment I began my career as a radio dramatist, I dreamed of creating a broadcast version of White's saga. However, I had already been pre-empted by a vintage dramatisation made in 1939 with original music by Benjamin Britten and was, in my day, pipped at the post when, In December 1981 – the year in which I dramatised The Lord of the Rings for the BBC – my Gandalf, Michael Hordern, continued his wizarding career by playing Merlyn in a Radio 4 dramatisation of The Sword in the Stone.

Occasionally, across the years, I have mooted the project again, always to be told that it was impossible to clear the necessary rights in The Once and Future King and that many others had tried and failed. So, I simply contented myself with collecting copies of the much-loved book, such as this handsome Folio Society edition with woodcuts by John Lawrence... 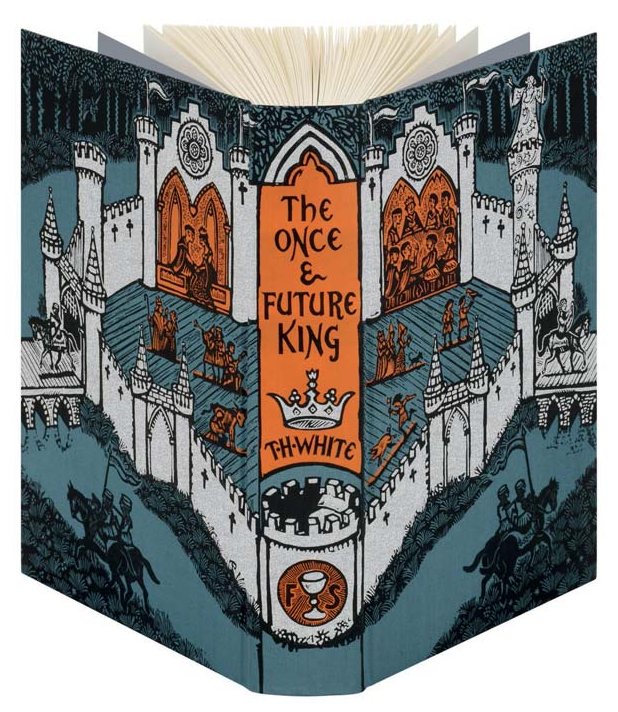 ...but I never quite gave up the hope that I might, one day, attempt to tackle White's take on the Arthurian myth in the medium I so much love.

Then, exactly a year ago, I tried again, deciding that I was going to find out for myself if the rights really were inaccessible. I began by approaching a good friend at the Disney Studio to ask his help...

It was the beginning of a twelve month quest that involved not just the Disney corporation but also the legal representatives of Lerner and Lowe (identifying and contacting whom was a saga in itself) and the agents representing the T H White Estate.

While these enquiries were going on, the project was tentatively offered to BBC Radio 4 who – after several detailed pitches – agreed to commission the dramatisation if those  elusive rights were ever cleared. All of the parties involved had to agree to a common deal or the project was a non-starter. The BBC Rights Department then began formal negotiations (encountering a variety of hitches and setbacks along the way) while I waited and waited and waited...

During this hiatus, David and I attended the opening of an exhibition at The Illustration Cupboard of the art of John Lawrence. Among the exhibits for sale was a signed Artist's Proof John's wood-engraving of Merlyn from the aforementioned Folio edition of The Once and Future King... 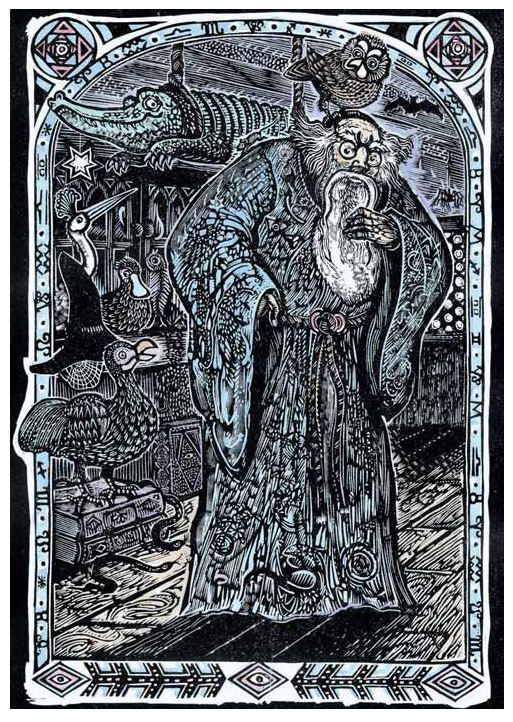 We decided to buy it as a good-luck omen and Merlyn, it seems, did, indeed, work some kind of essential magic, as last Friday I finally signed a contract with the BBC for six one-hour plays to be based on the book!

Announcing this on Facebook brought an amazing response with 145 'Likes' and close on 80 comments from people who clearly shared my delight in T H White's book and were looking forward to the broadcast with huge anticipation.

Whilst immensely exciting, setting up camp in Camelot is a daunting prospect, not least because, despite the legalities having meandered along though an entire year, I have, in stark contrast, just four months to write the six plays!

This fact prompted my friend, animator Uli Meyer to post this cartoon message featuring Disney's Merlin commenting on the task facing me in the weeks ahead... 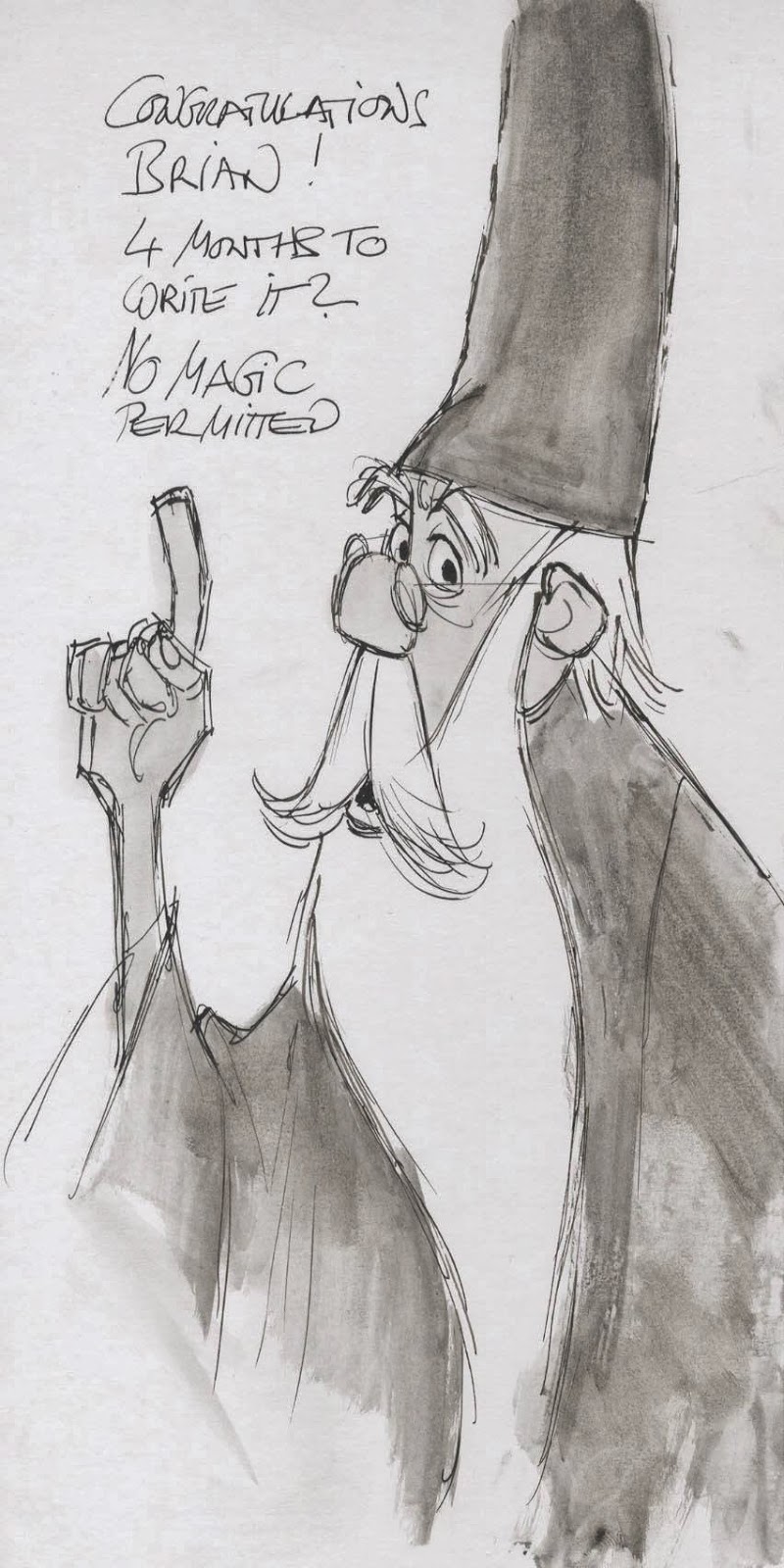 So, now the work has to start! And, in consequence, blog postings here are likely to be fewer and farther between than usual. However, I will endeavour to keep you up to date with progress and there will no doubt be the odd bits and pieces of Sibleyness appearing on my Facebook page.

And now, to quote the very last words of T H White's The Once and Future King, this is... 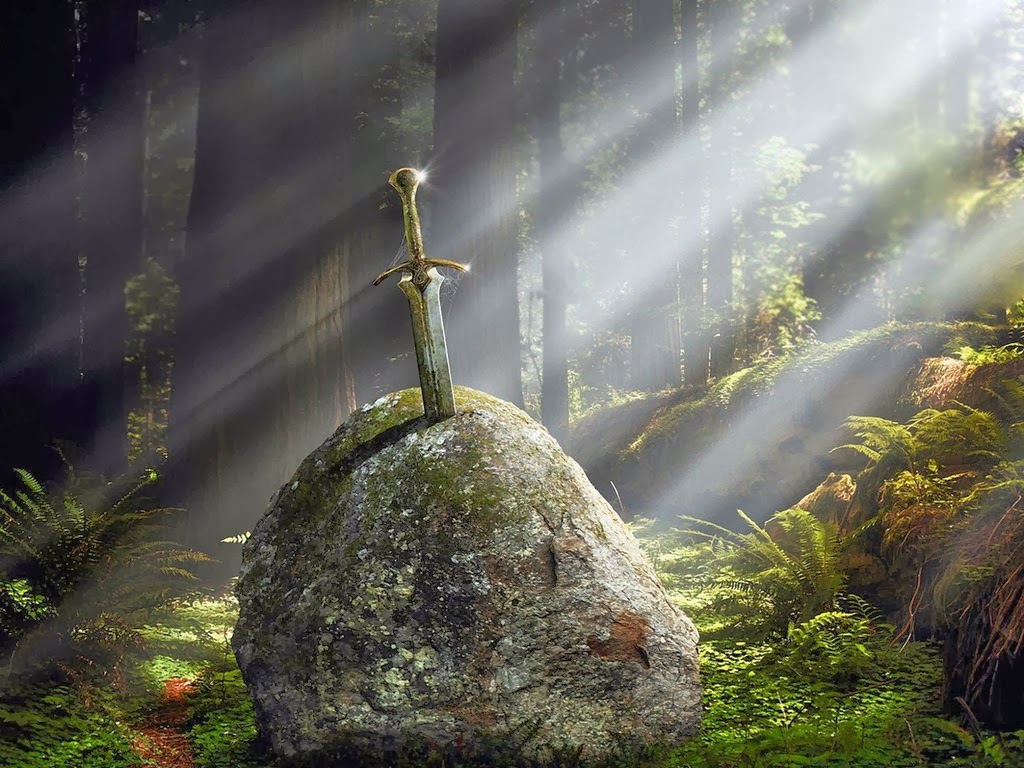 Labels: Camelot, King Arthur, radio, T H White, The Once and Future King, The Sword in the Stone, Walt Disney

I have the T.H. White book back at home, can't say I've managed to rad most of the book as only the Disney movie stuck to my imagination.

You're right, "Sword in the Stone" is such an underrated gem in its ways. The sequence with the squirrels is a personal highlight of mine, as well as the introduction scenes of Wart and Merlin drinking tea, and much more!!

Hurrah! Do keep us posted as to your progress but otherwise, have at it. The time is right etc.

In the meantime, I'm snuggling down with the updated 'Shadowlands'.

How marvelous! I was quite taken with The Once and Future King in my youth as well! Definitely due a re-reading.

I've wondered about the feasibility of putting together an "Author's Cut", for lack of a better phrase, of TOAFK as White originally intended it, complete with The Book of Merlyn at the end. If I recall correctly, parts of TBOM were taken out and inserted into Sword and the Stone when the publishers refused to publish all of TOAFK. So it would take some unraveling...but I think you are just the man for the job!

Steven - Yes, the scene in Merlin's cottage is great fun! I love the walking sugar bowl –– long, long before all those animated table-things in 'Beauty and the Beast'! :)

Galen – Too late! The latest Voyager edition from HarperCollins includes 'The Book of Merlyn' but without editing 'TO&FK' and Madam Mimm is still not there...

Congratulations Brian, this is wonderful news. As someone who has your LotR on constant playlist on the old generic MP3 player, I am really looking forward to what you make of White's funny, bleak and elegiac work.

Justin (no longer in Oxford, or Canterbury, but now in Virginia)

Usually the Sword in the Stone is merged with Excalibur. Is that the case in this book ? I don't think I've ever read it....

Right, I actually have that Voyager edition. But even if it's as simple as deleting the repeated portions from SITS that were intended for BOM, I wish someone would do it. It's a shame we can't buy and read the book as White wrote it!

I love Uli's cartoon - but I'm sure you will bring your own special magic to the series.

Re Blogs and Facebook - perhaps you can allow yourself a daily ration!

Don't forget, your pen is mightier than a sword!

We are very excited and looking forward to it, but travel and other exigencies risk us not hearing it all. are BBC doing an audio book please?

We're also looking for an audio version of this to listen to on a long journey, Does anyone know how we can do this?

Sadly, folks, the BBC doesn't have the rights to be able to release The Once and Future King on CD or download...

That is a beautiful cover!

Argh I missed the last few! I thought I had downloaded the episodes on the iplayer but looks like it didn't happen for some reason. Shame there won't be CD or anything. Did anyone manage to download them all? Let's hope there will be a repeat. I loved the ones I heard. Paul.

Where can I access this series? I would love to listen!

I wish I had access to listen to it. It's a real shame that BBC doesn't plan to release this on CD or for download. Mr. Sibley, I'm a huge fan of BBC Radio Dramas and I have a bunch that you had dramatized and they are amazing! If someone does have all the episodes of this on a link to download, I'm sure a lot of people (including myself) would be very happy.