'JOSEPH AND THE THREE GIFTS' REVISTED

Almost a year ago I wrote the article which follows about what was then my newly-published book, Joseph and the Three Gifts...

It was as much if not more about the journey that this little volume had taken from idea to print and, in particular, about the part played in that journey by the city of Venice, so beloved by David and myself.

As this year's planned and booked Christmas visit to La Serenissima is forestalled by a collision of potential surgery appointments and the universally disabling Coronavirus, I thought it timely to remind myself of how miraculously and unbidden gifts can come to us... 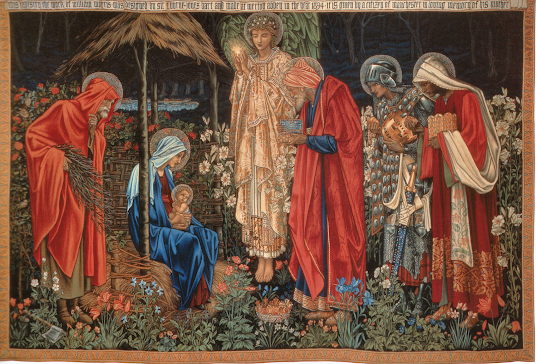 It was the tapestry that started it. It's true that the idea for my story Joseph and the Three Gifts came to me, fully formed, one cold, dark Christmas night in the city of Venice, but it had begun with the tapestry.

It is entitled (and depicts) 'The Adoration of the Magi', although it is sometimes referred to as 'The Star of Bethlehem' or just 'The Adoration'. It was hung in solitary splendour as the final work in an exhibition of the work of Edward Burne-Jones and I was so entranced by the imagery – and by its size and magnificence – that I felt as if I could almost step into the scene.

I should probably describe that scene: it is night but illumined by the brilliance of a star cradled in the hands of a central floating angel, white-robed and green-winged. We are in a woodland setting, richly carpeted with flowers, among them lilies, roses, irises and tulips. The figures of Mary and the Christ-child are housed in a minimalist structure of wattle-and-thatch and standing reverently before them are the Magi, opulently dressed and bearing their gifts of gold, frankincense and myrrh.

The Wise Men's focus is the mother and baby, but on the far left of the tapestry, unnoticed by the other characters in the drama, is an old man – Joseph – hesitantly entering, clutching a bundle of kindling that he has gathered with the use of small hatchet that now lies at his feet as if he had let it fall in his understandable awe at seeing the noble potentates venerating his wife and child.

I instantly realised what I had previously seen – seen but not noticed – in hundreds of other representations of the nativity hanging in churches and galleries or depicted on so many Christmas cards, that this man Joseph is almost universally portrayed as someone on the side-lines, in the margin, of the great happening.

In all our various ways of the depicting this event – from school nativity plays through to big-screen biblical epics – Joseph is only a supporting character: often more part of the scenery than a participant in the scene.

But what sort of a man was this carpenter from Nazareth? Was he good at his work – did he build tables and chairs that didn't wobble – and, more importantly, what kind of personality did he have? We know in Mary's famous prayer, 'The Magnificat', how she received the news that she was going to give birth to God's son, but how did Joseph react first to this astonishing revelation and then to being told – by an angel – just what was required of him in the way of his obviously baffled but nevertheless accepting cooperation?

Lots of other questions were soon buzzing around in my head – such as how a foster-father learns to love a child that is not a part of him; and, indeed, how any father comes to accept being the outsider to the exclusive relationship of mother-and-child. With these conundrums came another puzzling thought –– what became of the gifts of the Magi? What did Joseph and Mary do with the gold, frankincense and myrrh, those unlikely presents for a newborn child? All these jig-sawed speculations – together with some possible answers – suddenly fell into place one night last Christmas in Venice.

In wintertime, the city of Venice, usually thronging with tourists checking-off another tick-box on the bucket-list of life, is all but deserted apart from a few devoted and hardy visitors and the ever-dwindling population of local residents.

Ever a city of reflections, since its palazzi and churches are afloat on a lagoon and intersected by a maze of canals, it becomes in the dying month of the year the source of different kind of reflection. The soft, pellucid sunlight on the water, the sudden dropping curtain of December mist are an incentive to introspection and meditation. 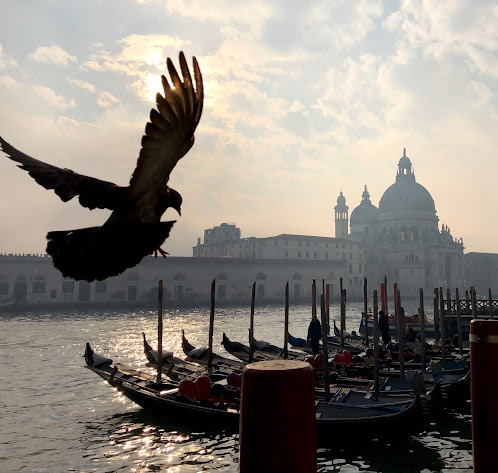 And it was in that setting that Joseph and the Three Gifts took form with the final piece of the puzzle falling into place in the form of an answer to the question: who is to tell Joseph's story? The writer's narrative voice? Or, maybe, Joseph himself? Or, someone who might be thought to have a very particular understanding of this ordinary man required to carry an extraordinary burden? That someone, I realised was an Angel – well, an Archangel, in fact. Gabriel.

As Gabriel began recounting his angel's story, I discovered an answer to a mystery that I hadn't even contemplated. You see, after the visit to the Temple when Jesus was twelve, there is no 'after' for Joseph: he makes no further appearance in the Gospel writers' telling of the life of Christ. If and when the question is asked, the predictable answer seems to have always been that, at some point before the beginning of Jesus' ministry, Joseph – presumably being an old man in comparison with his much younger wife – had simply died. But supposing, suggested my Archangel, that was not the case; what if Joseph was not already an old whitebeard at the time of his marriage to Mary? What if he lived long enough to witness – or at least learn of – the events of the first Easter?

So that is the journey of a little book and although – as I am pains to say in its pages – it is not gospel, it perhaps contains an invitation to reflect and take a fresh, unfamiliar, look at an all-too familiar story.

Read an extract from Joseph and the Three Gifts