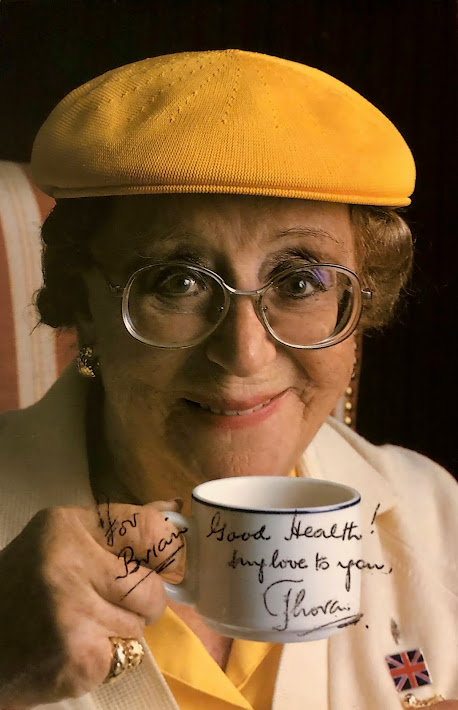 During my career I've had the opportunity – and privilege – of writing for some notable performers and, following productions, I would often have exchanges of letters with them, usually in the form of mutual congratulations.

But, with one very special lady, I had an on-going correspondence that continued across many years. I speak of Dame Thora Hird –– or just 'Thora' as she was to me, although she was old enough to have been my grandmother! Indeed, she became to me (as she probably did to many others) a kind of 'grandmother-substitute'. She was also, incidentally, the only person who has ever been allowed to call me 'Bri'!

We worked together on a number of programmes for the BBC's Religious Broadcasting Department, beginning, in 1983, with a little seasonal show entitled A Birthday at Bethlehem in which she starred alongside another long-time friend, the recently-departed Peter Goodwright.

Listen to 'A Birthday at Bethlehem'

A couple of weeks back, I stumbled upon a cache of letters from Thora – written in an immaculate hand (doubtless learned during her schooldays in Morecambe, Lancashire) asking about me, my family and work and full of delightful chatter about her family – husband Scottie and daughter, Jeanette – and whatever projects such was currently involved in such as All Creatures Great and Small and The Last of the Summer Wine.

In another letter she reported on filming 'A Cream Cracker Under the Settee' for Alan Bennett's 1987 Talking Heads series that would win her a 'Best Actress' BAFTA: "...There was only me in it... I found it a smashing challenge (at my age) learning it all!"

I was much moved to read one particular letter, from 1991, that I had long-forgotten. I share it here because it demonstrates, I think, what an amazingly wise and and caring woman she was.

The context: my parents (whom Thora had met on a number of occasions) had recently moved from the family home we shared in Kent to Somerset to be near my mother's sister and family, while I – suddenly liberated at the age of 42 – was about to move to London to live with my partner, David.

My 'coming-out' had been a protracted and far from easy process, especially for someone who was not only a Christian but, as a result of my writing and broadcasting, something of a 'publicly professional Christian'!

For many of my closest friends – in and out of the Christian arts and media world – the revelation of my gayness left them feeling less than comfortable.

While I had already gone through the hurtful experience of having long-standing church friends give me a decidedly wide berth – with one couple forbidding me from have any contact with my godson – I had, naïvely, hoped that my 'arty' and 'theatrical' Christian friends would cope a little better. Alas, many of them didn't...

Needing to give her my new London address, I wrote to her and poured out my story, wondering how this pillar of popular Christianity (a stalwart of the BBC TV God-slot-show Praise Be!) might respond.

I need not have worried... Here's the letter she wrote in response... 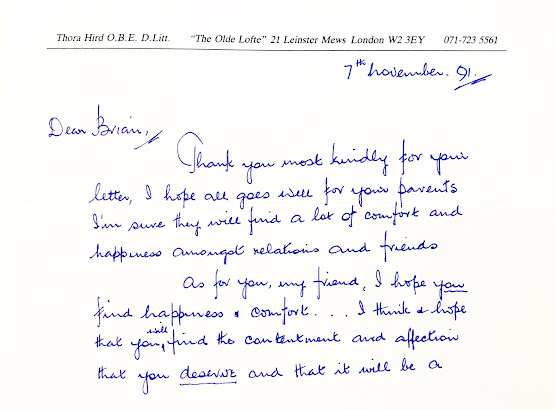 Thank you most kindly for your letter, I hope all goes well for your parents. I'm sure they will find a lot of comfort and happiness amongst relations and friends.

As for you my friend, I hope you will find happiness and comfort... I think & hope that you will find the contentment  and affection that you deserve and that it will be a help to your writing which is already warm & talented. I am a living example, as you are aware, that love helps one with the talent God has given me.

You know that both Scottie and I wish you nothing but good health and happiness, Brian... when you get settled in your new life I am sure it will feel there was never any other.

I assure you – you are in my prayers... take care and God bless you.

My love to you,

Thirty years on – just as Thora predicted – it feels as if there never really was any other life...

What a lovely letter and a memory to cherish.