This comic pastiche, first published here in 2107, resulted from a curious anomaly arising from our decision, four years ago, to 'upgrade' our Civil Partnership to a marriage. I'll let Sir Humphrey explain... 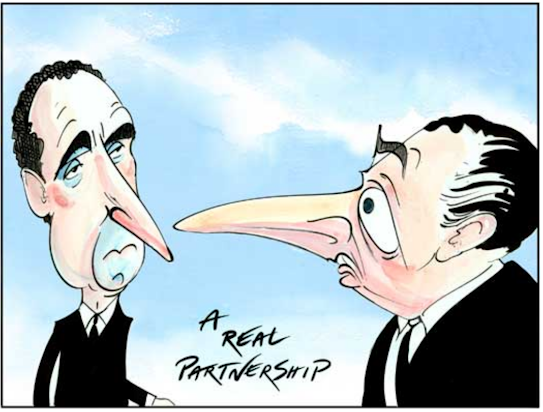 "Those chaps that converted their Civil Partnership to a Marriage, yesterday..."

"What is the date on their Marriage Certificate?"

"So, they were married yesterday?"

"Only in a manner of speaking, Minister."

"You see, Minister, by section 9(6) of the Marriage Same Sex Couples Act 2013 (subject to any contrary provision made by or under that Act for any particular purpose) the marriage is to be treated as having subsisted from the date on which the Civil Partnership was formed."

"Which was when, Sir Humphrey?"

"So, they were actually married when they became Civil Partners?"

"What I said, Minister was that, 'by section 9(6) of the Marriage Same Sex Couples Act 2013 (subject to any contrary provision made by or under that Act––––'"

"Yes, yes, I heard that, Sir Humphrey! So, are you saying that although they didn't get married in 2007 – because  they couldn't get married – an Act of Parliament passed six years later made it lawful for them to subsequently be considered as being married even though, at the time, it wasn't lawful?"

"In a manner of speaking, Minister, yes."

"Then, if I understand you correctly, even though their marriage certificate is dated yesterday, 30th August, 2017, they are now said to have become married ten years previously – despite the fact that such a union, on that date, was an impossibility?"

"Exactly so, Minister: your grasp of the matter is exemplary."

"Which means on 4th October 2017 – just five weeks after the date on their Marriage Certificate, they will be celebrating their 10th Wedding Anniversary?"

"Then, maybe we should send a card to congratulate them?"

by Brian Sibley & His Husband (from an idea by David Weeks!)
and with respectful apologies to Jonathan Lynn & Antony Jay