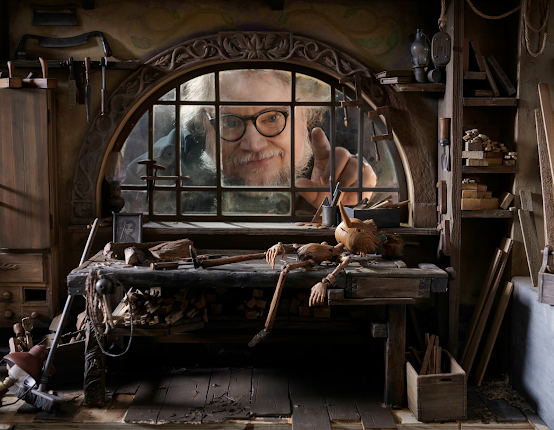 After the truly shameful live-action version of Pinocchio recently released by Disney (a total betrayal of their great animation heritage) the prospect of another movie based on Pinocchio could only come with the knowledge that it couldn’t be worse than the one we’d just been given! As it happens it is, proportionally, as wonderful as its forerunner was dire.

If one could pick any director to film the story of a puppet that earns the right to become a real boy, Guillermo del Toro – having a reputation for emotionally complex movies – clearly deserves a place in any list of contenders and, with this truly astonishing film, he has not only proved himself worthy of the task, he has delivered what is nothing short of a masterpiece.

The medium in which del Toro has chosen to present this cinematic work of art is the time-consuming, labour-intensive craft of stop-frame animation. It is a technique as old as cinematography: it was responsible for some of film’s earliest experiments in conjuring the illusion of life, the amazing films of Czech puppet film-maker Jiří Trnka, Willis O'Brien’s legendary behemoth, King Kong, Ray Harryhausen’s dinosaurs and demons and the adorable menagerie of Aardman Animations. For this project del Toro has collaborated with Mark Gustafson who was responsible for the animation direction in Wes Anderson’s 2009 adaptation of Roald Dahl's  Fantastic Mr. Fox. 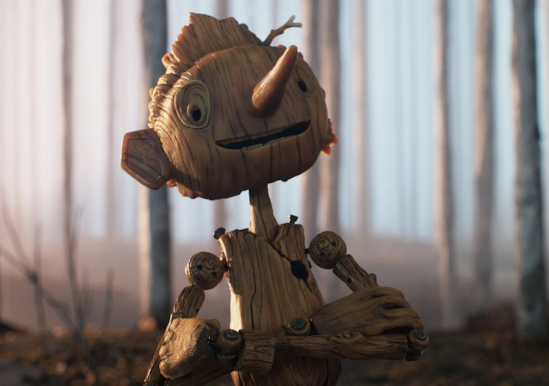 Of course, del Toro’s Pinocchio is no closer to Carlo Collodi’s nineteenth century children’s story than was Walt Disney’s 1940 animated classic but – despite the undoubted moments of terror in Uncle Walt’s telling – del Toro has plumbed every nuanced psychological depth of the concept of a man-made creature given life that has been an ever-present narrative trope from Ovid’s Pygmalion and Galatea, via Mary Shelley’s Frankenstein to Chucky in the film Child’s Play and after.

Del Toro’s “little puppet made of pine” is no finely chiselled and polished marionette; he is a grotesque mockery of a child, crudely cobbled into being by an inebriated, grief-stricken Geppetto. We are in familiar del Toro territory: Pinocchio is a freak, a misfit, an outsider and a potential threat to everyone who conforms to societal norms. In a touching true moment of innocent self-understanding, Pinocchio compares his misaligned limbs with those of Geppetto’s finely carved figure of the crucified Christ (himself an image of the dangerous outsider) in the hillside village church.

The script of this – the 22nd cinematic variation on the Pinocchio theme – admittedly plays faster and looser with Collodi’s didactic text than even Disney’s script-writers: the explosive puppet-theatre showman is neither Collodi’s Mangiafuoco nor Disney’s (volcanically named) Stromboli, he is, here, Count Volpe: an amalgam of the original man-mountain of malignancy (his original puppet-persona is still to be glimpsed as one of the carnival’s background-freaks) combined with the wily Fox and his side-kick Cat who were the stand-out rogues of the Disney version seducing Pinocchio from the straight-and-narrow with the romantic dream of “an actor's life.” In this new incarnation, the film’s central villain focuses the myriad ideas and forces that oppose Pinocchio's naive integrity. 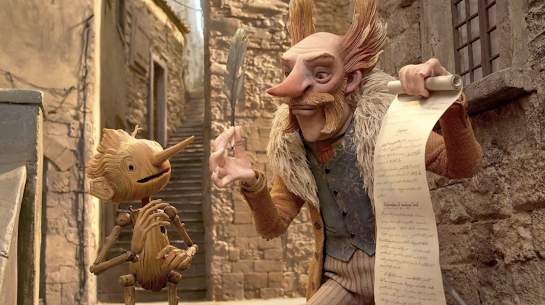 Collodi’s life-empowering Fairy with Turquoise Hair (Disney’s Hollywood-blonde Blue Fairy) is here transformed into an wondrous being: a mystical blue creature with wings of eyes like some Biblical phenomenon that del Toro names a Wood Sprite – the spirit not just of the woods, it seems, but of all things wooden – who with her similarly blue, many-eyed horned sister – are ancient, fantastical, creatures from a hitherto unexplored cavern in Pan’s labyrinth. 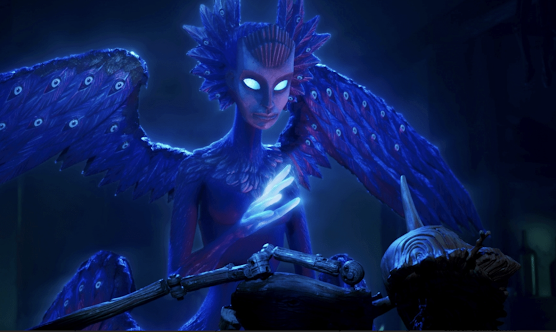 As in Disney, the talking cricket (so swiftly and violently dispatched by Pinocchio in Collodi’s novel) assumes the role of storyteller with the task of having charge of Pinocchio’s moral education given new meaning by his actually living in a knot-hole in the puppet’s chest. 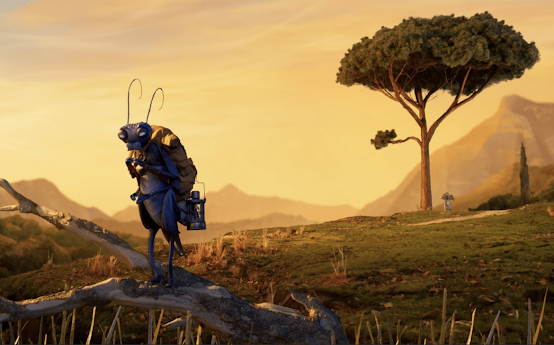 The cricket (or to give him his new, grandiose name ‘Sebastian J. Cricket’ is spoken – and sung – for by Ewan McGregor in a mix of bug bemusement and human irritation while David Bradley (in his third movie for del Toro) gives us the perfect Geppetto – a damaged soul, haunted by the past, wounded by loss and wrestling with those issues that have – throughout history – confronted fathers and sons. There is a starry line up of supporting voices including Christoph Waltz (as the, by-turns, charming and malevolent Count Volpe), Tilda Swinton (and the Sprite and Death) and an impressive vocal performance from young newcomer, Gregory Mann, as the titular character.

Eschewing the original period of the book in favour of Second World War Italy under ‘Il Duce’, del Toro gives uses his seemingly innocent puppet show to address a vast agenda of topics including war and peace, faith and disbelief, trust and deceit, wisdom and folly, grief and joy, cowardice and courage and, ultimately – in Geppetto’s relationship with both his long dead son and his own self-carved replacement – we are asked to grapple with nothing less than matters of life and death.

The scenario hurtles towards its climax in narrative territory with which we are familiar from book and earlier films: Geppetto’s rescue bid to save his wayward puppet-child leading to Pinocchio’s quest to save his creator-father from the monstrous dog-fish that has swallowed him and his little boat. The ending, however, is not quite what we may have been expecting, but – without spoiling your discovery – it is one that not only feels true to everything that has gone before but also, perhaps, the only place where del Toro could possibly ring down the curtain.

There are many moments en route to that place when – so bound up are we in this story and its telling – that it is difficult to remember that all the characters in this intimate drama are puppets – not just the one who looks like a puppet! 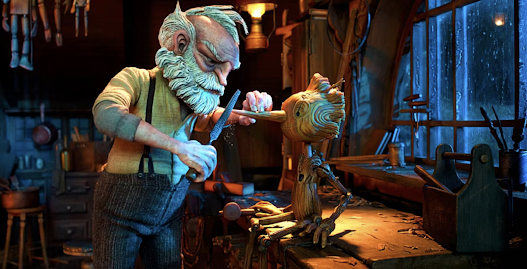 Guillermo del Toro’s Pinocchio achieves what only truly great animation can achieve: permission for an audience to invest in the sheer wonderment of story and characters and so allow themselves to be moved to laughter and tears by the age-old magic of puppetry. 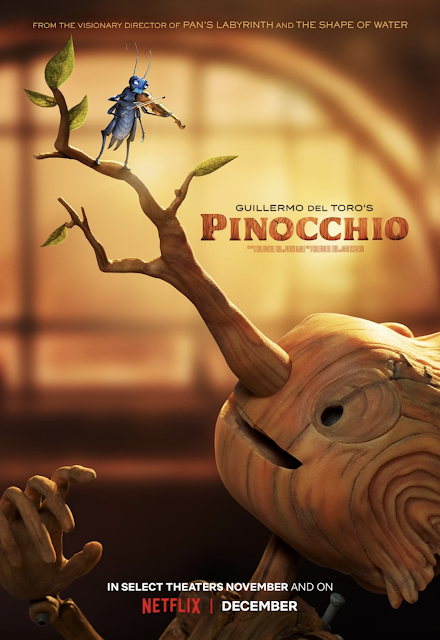 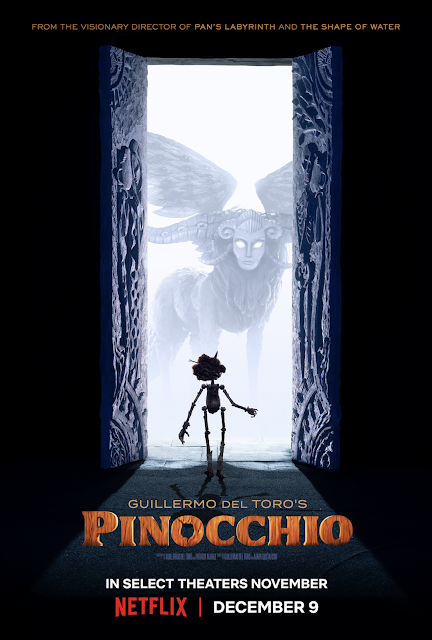