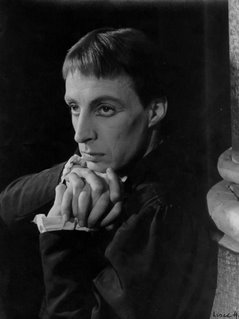 I note with great sadness the passing, at the age of 72, of the actor Ian Richardson.

Although identified for all time with his performance as the Machiavellian politician, Francis Urquhart, in the BBC’s 1991 TV trilogy, House of Cards, Ian Richardson was an actor of extraordinary range and talent.

A founder member of the Royal Shakespeare Company, he played many of the Bard's greatest roles including (right) Hamlet for the Birmingham Repertory Theatre in 1959. He starred in dozens of plays on the London and Broadway stage, but his popular fame rested on his performances in such memorable television productions as John le Carré, Tinker, Tailor, Soldier, Spy, Tom Sharpe’s Porterhouse Blues, Mervyn Peake's Gormenghast and Charles Dickens' Bleak House as well as a spell as a clinically incisive Sherlock Holmes.

Just three weeks ago, I had the honour to be in a BBC studio listening to Ian Richardson recording my book Shadowlands, the story of C S Lewis and his late-flowering love for Joy Davidman.

I was thrilled when my producer (and best friend) Malcolm Prince told me that Ian had agreed to present the book as a serialised reading on Radio 2. We couldn’t have been better served: he arrived early and worked flat out for seven hours at a demanding and unrelenting pace, refusing anything to eat or drink (other than water) until he had completed the recording of all eight fifteen-minute episodes.

Though fully prepared and clearly having given a lot a thought to the changing moods of the piece from episode to episode and how most effectively to portray the central characters, he invited criticism and delighted in being given notes.

When I offered a suggestion for an alternative reading of a short, six-word sentence that is one of the turning points in the book, he instantly seized on the thought and gave it that interpretation with perfection; and, on another occasion, when one of us offered an idea, he immediately responded: “Yes, yes! I see exactly how it should be read! Thank you! I love taking direction!”

Of course, any direction by us was minimal. What could we ever truly tell an actor with Ian’s prodigious talent and years of experience? Watching him at work, as he grappled with the emotions underpinning the story, and in particular the sense of overwhelming grief giving way to slowly emerging hope that is at the heart of Shadowlands, was a privilege.

I hope - not simply for selfish reasons - that the BBC will decide to eventually broadcast the reading: it would be a small tribute to a great actor…

One last enjoyable memory from a memorable day: after several noisy outbursts from people in the corridor outside the studio that had interrupted the recording, someone walked by whistling merrily. Ian got up from the microphone and went to the door and pointed out to the whistler that a red light was illuminated over the door indicating that a recording was in progress. When he returned to his seat, Malcolm apologized on behalf of a thoughtless colleague… “That’s alright,” replied Ian, “I don’t think he’ll do it again - I gave him one of my best Francis Urquhart looks!” 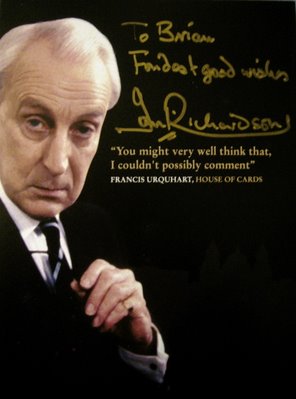 I'm really glad you posted this and not just because it gives another unique glimpse into your work and the world of radio. As a talking book/radio drama fanatic,Richardson's reading of 'Treasure Island' got me into the book and I was aware, on listening to it, that here was a real considered performance.Every character was markedly different from the narrator onwards.Their dialogue LIVED, right down to his gruff portrayal of Ben Gunn which showed how much he had thought beforehand of how he would play it.It is not simply the best reading of Treasure Island I have (and I have several), it is one of the best readings full stop and certainly the most inspiring.What a great joy to have him reading Shadowlands.

Thanks for that retrospective, Brian. I really admired the man, especially the way he portrayed haughtiness in Bleak House & the combined haughtiness & haunted sadness in Gormenghast. Sends shivers down my spine.

I missed both the BBC News at 6:00 and 10:00 yesterday, so I'm not sure what kind of tribute they gave Ian Richardson.

Instead, timing meant I only caught the Channel 4 News. Shocked to see a resonably long piece on the 'career' of Anna Nichole Smith (who never seemed to understand that looking like Marilyn Monroe didn't make you Marilyn Monroe), while Mr Richardson only had a rather bizarre 'tribute' where MPs discussed Urquhart. Even Jon Snow appeared embarrassed by it.

For all the talk of House of Cards and it's sequels, and his wonderful portrayal of Bill Haydon in Tinker, Tailor, Soldier, Spy, the roles I loved Mr Richardson playing were Major Neuheim in Private Schultz, Governor Rex Hunt in the excellent An Ungentlemanly Act with Bob Peck and Ian McNeice, and Dr Joseph Bell in Murder Rooms.

Thank you for this. Ian was a great man and he is still sorely missed by all his fans.