Time to reveal the answers to the entries in my recent book Book Competition.

Entrants were asked to sell the plot of a well known book in 12 words or less. The results proved too puzzling for most readers, but for those who wondered which book was what, here are the descriptions and the volumes they represented...

1) Orphans! Abortions! War! Incest! It's all about apples and pairs! (Joint-First-Place from Good Dog)

The Cider House Rules (1985) by John Irving; subsequently adapted for stage and film: an excellent, pithy summary of the book's key ingredients with a very clever "apples and pairs" tag-line!

Jane Eyre (1847) by Charlotte Bronte: all the key-characters and events succinctly condensed. The Reader's Digest couldn't do better!

CONGRATULATIONS to SUZANNE for correctly identifying both these books - and, indeed, being the ONLY reader to have a go at guessing any of them!!

The Bible (0BC onwards!) by Assorted Hands: The Good Book brought to book.

4) Ancient tales, human sacrifice, miracles and the end of the world. (Gill)

Ditto by Ditto! But what happened to the SEX??

Oliver Twist (1838) by Charles Dickens (aka Oliver! by Lionel Bart!): you want MORE? I'd say, that just about sums it up!

6) Sex bestiality and fairies in the woods, happy ever after in town. (Gill)

A Midsummer Night's Dream (c. 1595) by William Shakespeare: a neat summary of some of the basic differences between country life and town life! 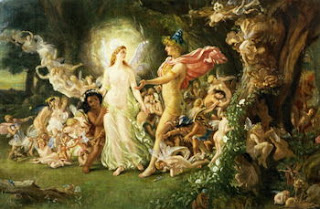 War and Peace (1865-69) by Leo Tolstoy --- or so Mr Weavil says... I have to admit I didn't quite understand this one, so bonus points in spades if anyone got it - other than Mr W of course!

8) A journey from childhood to independence, for anyone on that journey themselves. (Qenny)

The Lord of the Rings (1954-1955) by J R R Tolkien, although this could be a description of a great many books. Qenny explains his précis thus...

"This might seem like an odd perspective, but it works for me. I was really disappointed with final part of Peter Jackson's film version because it missed out 'The Scourging Of The Shire', and for me, that was one of the most important parts of the whole story. The hobbits went from being like innocent children to having to look after themselves, and not having the elves and everyone else around to protect them. The journey of the books, which is mostly seen through the eyes of the hobbits and is a journey from innocence to maturity, only achieves closure when Saruman had finally been routed from The Shire. It is essential to the integrity of the story arc, in my opinion." 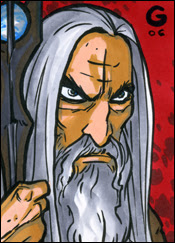 [Images: Study for The Quarrel of Oberon and Titania by Sir Joseph Noel Paton; Saruman by Grant Gould]
Posted by Brian Sibley at 12:00

"Could the 'wobbly furniture etc' not refer to the fact that nobody has ever read 'War and Peace', but it is really good for propping up table legs etc?"

GILL - Yes, well, it seems quite a reasonable argument to me...

We now await Boll Weavil's own explanation - but since, yet again, New Blogger disallowed any comments on today's post (now fixed!) we have yet to hear from him or anyone else...

Brian, I thought the "wobbly furniture" line referred to propping up tables and the like. Given the size up a typical War and Peace printing, that would really be one short leg. (Unless it's not as big as I remember it being).

The Bible has sex as well as human sacrifice? I should really read that.

Anyhow, glad you liked the Cider House description. Looking forward to the next quiz.

Hey... I read War & Peace, in both English and French... and I enjoyed it! But I still don't get the wobbly furniture bit...!