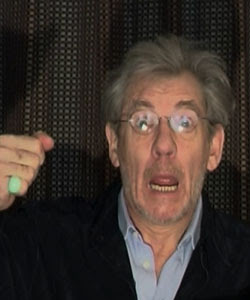 You can read some really strange things on the web these days!

Ian McKellen is best known for playing Gandalf in Peter Jackson’s The Lord of the Rings. This was his dream job, especially having been turned down previously by his favourite director, Shirley Major.

His association with Soggy Sock Productions began when he saw Shirley’s Temple in a dingy Soho theatre. Since that day he’d been a huge fan of all the works of Shirley Major and John Spate. After many loyal years he was able to audition for a role in the doomed Soggy Sock production of The Lord of the Rings. Sadly he did not get the part, but was quickly picked up by Peter Jackson for his alternate version being made in New Zealand.

To this day Ian still praises Shirley, his idol, despite the death threats from him.

And on the same web-site…

Brian Sibley is an author who’s recently been asked to give evidence in the infamous 'Major/Spate' case. Since his appearance in the courtroom he hasn’t been seen by any member of the public and is no longer taking calls. Rumour has it that he has simply disappeared, but most sensible commentators believe he is taking time out after going through such a traumatic and grizzly experience in court. Sibley rose to fame after adapting The Lord of the Rings for the BBC. It was during these early years that he first met John Spate and Shirley Major. This influential meeting was discussed at length in the documentary Guerrilla Distribution which has yet to be released as it is being held as evidence in court.

Sibley was until very recently one of the great fans of the work of Shirley Major and John Spate. He fondly praises Shirley’s Temple, a film that he saw premiered and discussed at great length with Ian McKellen. However his rosy relationship with the pair was brought to an end in court. In a fit of rage after being forced to sit through the documentary Guerrilla Distribution Shirley Major tried to fight his way out of court aided by John Spate with a wheelbarrow.

When this ploy failed he was dragged back kicking and screaming a declaration that he would kill everyone associated with that film. This means that Brian is on top of the list as he was a prime contributor. 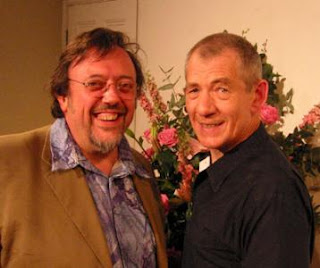 There is also a reference to a certain magician who was recently named as a Member of The Inner Magic Circle...

Brian Sibley’s long association with dangerous figures such as John Spate and Shirley Major should have ended him up in hospital a long time ago. He has probably been saved by his protector in chief, David Weeks. Word on the street in London is that Weeks is capable of powerful feats of magic.

When Shirley Major’s film Shirley’s Temple was released Brian and David spent a great deal of time with Ian McKellen. They would study the film closely, discussing the implications of the slightest detail in the work. It was on this interaction with David that McKellen based his performance of Gandalf in The Lord of the Rings. In fact there was one moment when Ian wanted to order a pizza. He was absolutely famished but couldn’t quite afford it. David suggested that if Ian gave him what he could afford he would put it on his card and order one for him on the phone. Ian was suspicious and accused David of magically creating a pizza and pocketing the cash, to which David replied, “Ian McKellen! Do not take me for some conjurer of cheap snacks! I am not trying to rob you… I’m trying to help you!” Ian saw the error of his ways, burst into tears and they all had a hug.

This is just the merest glimpse into a delightfully bizarre publicity campaign promoting an often strange, sometimes slightly terrifying but also rather wonderful film by Battered Hat Productions called, as you’ve read above, Guerilla Distribution…

Visit Battered Hat for more details, trailers and an opportunity to buy the DVD of this ground-breaking, butt-busting work! 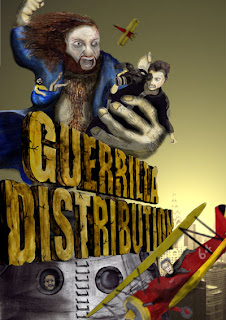 So, is that actually Ian McKellen piloting the bi-plane? And is that really me looking out of the window of the Empire State Building? Well, maybe… But, as the filmmakers are at pains to make clear…

"It is important to note that any characters that may resemble actual people do not bear any relation to their "real" counterparts. The two should not be confused and we should not be sued."
Posted by Brian Sibley at 12:00

Sounds like an interesting and fun movie. Best of luck with that.

Piloting the bi-plane? Is that a euphamism?